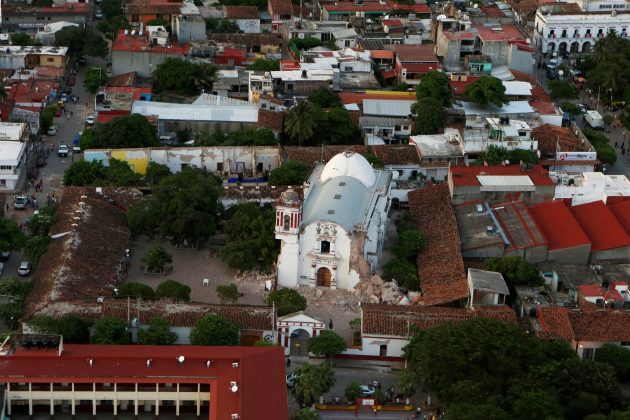 An overview of the Saint Vicente Ferrer church, damaged in an earthquake that struck off the southern coast of Mexico late on Thursday, in Juchitan, Mexico, September 9, 2017. REUTERS/Carlos Jasso

MEXICO CITY (Reuters) – The powerful earthquake that rocked Mexico City last week had terrifying echoes of a more deadly 1985 shock in one housing project, raising tough questions about how ready one of the world’s largest cities is for a major catastrophe.

At its epicenter, Thursday’s 8.1 magnitude quake was stronger than the disaster three decades ago that killed at least 5,000 people in Mexico City, toppling two tower blocks in the historic central neighborhood of Tlatelolco.

Mexico City has made major advances since then, with regular earthquake simulations, improved building regulations, and seismic alarms designed to sound long enough before the shock to give residents time to flee.

Nearly 100 people are known to have died in the latest quake, none of them in the capital.

Yet experts noted the tremor’s epicenter was further from Mexico City and two times deeper than in 1985, and warned it would be wrong to assume the capital could now rest easy.

Such caution was palpable in Tlatelolco.

Antonio Fonseca, 66, a longtime resident who witnessed the 1985 collapse of the tower blocks in the Nuevo Leon housing complex that killed at least 200 people, said memories of the event sparked panic attacks in the neighborhood when the quake rolled through the city on Thursday.

“I’m quite sure that these buildings are very well reinforced,” said Fonseca, a local history expert. “But there are many people who are still wary.”

When the ground began shaking in September 1985, local workers laughed it off at first, continuing with breakfast. Nobody believed Fonseca when he told them Nuevo Leon had fallen, he recalled.

Later, Fonseca saw a group of children in the neighborhood’s central Plaza de las Tres Culturas who had been waiting for the school bus, their uniforms caked in white dust from the building’s collapse.

This time around, residents feared the worst. Streets filled across the city when the quake hit near midnight. Crying and praying, hundreds descended onto the plaza and some stayed for hours, questioning whether it was safe to return home.

Minerva de la Paz Uribe, a retiree living on the plaza, was unable to evacuate with her father, who turned 104 the next day. She watched from her window as neighbors scrambled to escape.

“People leave running with their dogs. They leave screaming. Are we prepared? No, no, we’re not prepared,” she said, as a group of friends on the plaza murmured in agreement.

Some 30 buildings in Tlatelolco were rebuilt after the 1985 disaster and a dozen were demolished. Mexico’s new skyscrapers include hydraulic shock absorbers and deep foundations.

But such safety features are less prevalent in much of the sprawling periphery, which is filled with cheap cinderblock homes like the buildings that collapsed on Thursday in the southern states of Oaxaca and Chiapas near the epicenter.

Situated at the intersection of three tectonic plates, Mexico is one of the world’s most earthquake-prone countries, and the capital is particularly vulnerable due to its location on top of an ancient lake bed.

The government’s widely panned response to the 1985 quake caused upheaval in Mexico, which some credited with weakening the one-party rule of the Institutional Revolutionary Party (PRI). After 71 years, the PRI was finally voted out in 2000.

Mexican news website Animal Politico on Monday reported that thousands of seismic alarms acquired by the government of Oaxaca five years ago were never distributed, with some appearing for sale on online auction sites.

A spokesman for Oaxaca’s civil protection authorities did not immediately respond to a request for comment.

Mistrust of government has spurred some to form community groups. Among the most famous are the Tlatelolco Topos, or moles, formed from rescue squads that dug survivors and corpses out of the rubble in 1985, and have since traveled the world offering assistance in quakes and landslides.

But disasters have a habit of catching people off guard.

Georgina Mendez de Schaafsma was returning from taking children to school when the 1985 temblor struck Tlatelolco. To her horror, she realized her six-year-old daughter was home alone.

Racing back, Mendez retrieved the girl. But three other relatives died in the Nuevo Leon collapses.

Now 70, Mendez still lives in the same building, which had a number of floors removed after the 1985 quake. She stayed indoors when the tremors began on Thursday night and believes Mexico City is better equipped today – up to a point.

“In a catastrophe, I think we’re never prepared,” she said. “Nature is stronger.”