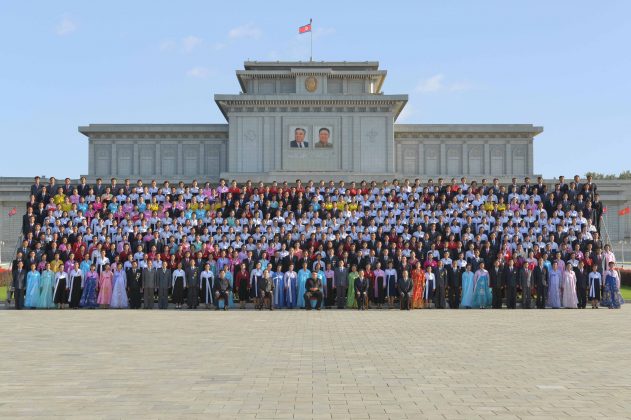 By Jack Kim and Roberta Rampton

SEOUL/WASHINGTON (Reuters) – North Korea showed trademark defiance on Wednesday over new U.N. sanctions imposed after its sixth and largest nuclear test, vowing to redouble efforts to fight off what it said was the threat of a U.S. invasion.

U.S. President Donald Trump said Monday’s sanctions, unanimously agreed on Monday by the 15-member U.N. Security Council, were just a small step towards what is ultimately needed to rein in Pyongyang over its nuclear and missile programs.

The North’s Foreign Ministry said the resolutions were an infringement on its legitimate right to self-defense and aimed at “completely suffocating its state and people through full-scale economic blockade”.

“The DPRK will redouble the efforts to increase its strength to safeguard the country’s sovereignty and right to existence and to preserve peace and security of the region by establishing the practical equilibrium with the U.S.,” it said in a statement carried by the official KCNA news agency.

The statement echoed comments on Tuesday by the North’s ambassador to the United Nations in Geneva, Han Tae Song, who said Pyongyang was “ready to use a form of ultimate means”.

“The forthcoming measures … will make the U.S. suffer the greatest pain it ever experienced in its history,” Han said.

The North’s Rodong Sinmun newspaper also accused South Korea of being Washington’s “puppet”, criticizing Seoul’s agreement with the United States to amend an existing bilateral guideline that will now allow the South to use unlimited warhead payloads on its missiles.

The U.N. resolution was triggered by North Korea’s test of what it said was a hydrogen bomb.

Damage to mountainous terrain at the North’s nuclear test site in Punggye-ri seen in satellite imagery taken after the latest test was more extensive than anything seen after the five previous tests, the Washington-based 38 North project said.

There was also activity at another location in the Mount Mantap site involving large vehicles and mining equipment that suggests “onsite work could now be changing focus to further prepare those other portals for future underground nuclear testing”, said 38 North, which monitors North Korea.

The North accuses the United States, which has 28,500 troops in South Korea, a legacy of the 1950-53 Korean war, of continual plans for invasion.

North Korea has also tested a missile capable of reaching the United States, but experts say it is likely to be at least a year before it can field an operational nuclear missile that could threaten the U.S. mainland.

Trump has vowed not to allow that to happen.

A tougher initial U.S. draft resolution was weakened to win the support of China and Russia, both of which hold U.N. veto power. Significantly, it stopped short of imposing a full embargo on oil exports to North Korea, most of which come from China.

“We think it’s just another very small step, not a big deal,” Trump told reporters at the start of a meeting with Malaysian Prime Minister Najib Razak.

“I don’t know if it has any impact, but certainly it was nice to get a 15-to-nothing vote, but those sanctions are nothing compared to what ultimately will have to happen.”

U.S. Treasury Secretary Steven Mnuchin warned China, North Korea’s main ally and trading partner, that Washington would “put additional sanctions on them and prevent them from accessing the U.S. and international dollar system” if it did not follow through on the new measures.

Another senior administration official told Reuters any such “secondary sanctions” on Chinese banks and other companies were on hold for now to give China time to show it was prepared to fully enforce the latest and previous rounds of sanctions.

Washington so far has mostly held off on new sanctions against Chinese banks and other companies doing business with North Korea, given fears of retaliation by Beijing and possibly far-reaching effects on the world economy.

An article carried on the front page of the People’s Daily, the official paper of China’s ruling Communist Party, said the Korean peninsula had reached the “moment of choice” where the United States and North Korea must break from the cycle of nuclear tests and sanctions.

“All parties involved in the peninsula have their own strategic considerations, but not being able to see beyond this vicious cycle is not in anyone’s interest,” the article said.

Asked about the North Korean and U.S. rhetoric, China’s foreign ministry reiterated a call for restraint and a return to dialogue.

“We hope all relevant parties can be rational and maintain restraint and not take actions that could further increase tensions on the peninsula,” ministry spokesman Geng Shuang said at a regular briefing.

U.S. Ambassador to the United Nations Nikki Haley said the new sanctions could eventually starve North Korea of an additional $500 million or more in annual revenue.

The United States has said that a previous round of sanctions agreed in August was aimed at cutting North Korea’s $3 billion in exports by a third.