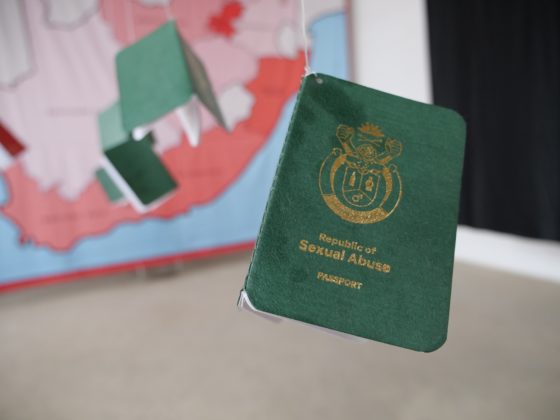 A fake passport for the Republic of Sexual Abuse hangs from the ceiling at an exhibition in Rosebank Mall in Johannesburg, South Africa, 6 December 2019. Thomson Reuters Foundation/Kim Harrisberg

JOHANNESBURG (Thomson Reuters Foundation) – It has its own currency, passports and a blood-stained map, but this is no ordinary country. Welcome to the Republic of Sexual Abuse, the creation of a group of campaigners in South Africa, where a woman is murdered every three hours.

The fictional country is the centrepiece of an exhibition held in a Johannesburg mall that seeks to raise awareness of South Africa’s high levels of violence against women – and inspire action against it.

It was thought up by Roanna Williams, executive creative director of the advertising agency Black River FC, after she saw women protesting against the violence from her office window.

“Most women in South Africa have a story of sexual abuse,” said Williams at the exhibition, which opened on Nov. 26 to coincide with the United Nations’ 16 days of activism campaign against gender-based violence.

“We are not just trying to shock, we are showing that this is everyone’s problem and we all need to act, not just during 16 Days of Activism, but 365 days of the year.”

Soon after, President Cyril Ramaphosa announced a five-point plan to tackle violence against women, including media campaigns, strengthening the criminal justice system, and providing training for healthcare workers and counsellors.

The exhibition, run together with women’s rights group People Opposing Women Abuse (POWA), includes a huge red map painted in fake blood with all the excuses men use to rape women – including “I was drunk”.

At the back of the exhibition, a warning sign marks the entrance to a bedroom where blood stained sheets hide behind a curtain. Recordings of cries and slaps fill the room.

“This room is where reality kicks in for people in the exhibition,” said Patricia Naha, a volunteer and counsellor with POWA, adding it showed women were not safe anywhere.

About 3,000 women in South Africa were murdered in 2018 – one every three hours and more than five times higher than the global average, according to the World Health Organization.

A video advertising South Africa as a tourist destination is played on repeat, with images of the country overlaid with jarring narration about sexual violence.

“Retreat to the spectacular bushveld,” a voice is heard saying over a video of zebra running through a national park. “Where women are dumped after being murdered,” the sentence continues.

Some men visiting the exhibition get defensive, said Clayton Swartz, Black River FC’s art director, but many leave taking pamphlets and asking how they can help.

“I am proud to be South African, but not with these rape stats,” said Swartz. “We want to encourage everyone to speak out.”

The exhibition, which has so far attracted thousands of visitors, is open until Dec. 10 at Rosebank Mall and the organisers are seeking corporate sponsors to help them take it across the country.