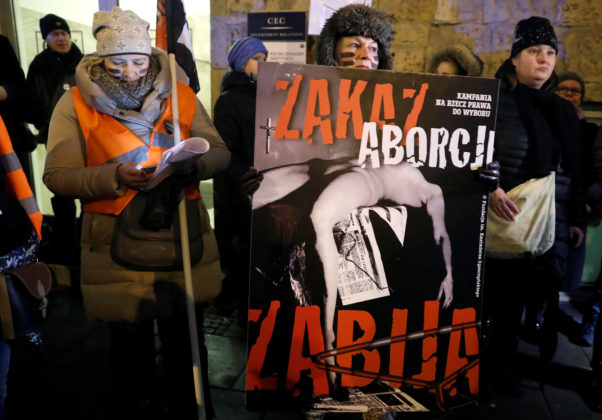 LONDON (Thomson Reuters Foundation) – Women in Poland facing some of Europe’s tightest restrictions on abortion will be offered advice and funding to travel abroad to get a termination through a new “Abortion Without Borders” initiative launched on Wednesday.

The hotline service will give advice about how to safely buy abortion pills online and refer women to medical abortion providers in Germany, the Netherlands and Britain.

Women struggling to afford the procedure will also be given financial support to make the trip, said organisers of the initiative, a collaboration between six Polish and international groups.

“Abortion Without Borders believes that getting an abortion shouldn’t depend on where someone is born and what passport they carry,” they said in a statement.

“Until everyone who needs an abortion can get one locally, we will be here.”

Poland only allows doctors to grant abortions if the fetus has a severe abnormality, if the mother’s health is threatened or if the pregnancy is the result of rape or incest.

Women’s rights groups say it is often very hard to find a doctor willing to carry out an abortion even if the conditions are met.

Only about 1,000 women get a termination in Poland each year, according to official figures, mostly for cases of fetal damage.

Organisers of “Abortion Without Borders” posed with suitcases at Warsaw’s main train station to highlight the situation of women forced to travel abroad to get a medical abortion.

They said all their activities were legal and there was no law in Poland criminalising women who took action to end their pregnancy or had an abortion abroad.

The initiative was launched by Polish abortion rights groups Abortion Dream Team and Kobiety w Sieci (Women on the Net), together with four other European and international groups.

Organisers said they hoped to break down stigma and uncertainty for Polish women seeking abortions and to reach those who would otherwise be unable to afford the procedure.

“The only person with the right to decide to continue or end a pregnancy is the person who is pregnant – not governments or churches or bad laws or policies,” said Justyna Wydrzynska from Kobiety w Sieci.