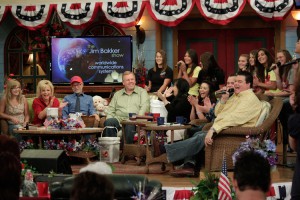 “[My father] became an absolute lunatic for Jesus!” Philip said.

The girls of Stella’s Voice sang the song “Who Will Remember?” to the audience leading into Philip Cameron speaking about the horrors of human trafficking. They shared the story of Stella and the way she was destroyed by her captors and how that spurred Philip into action.

“Awareness doesn’t save a girl,” Philip Cameron said. “The girls are all aware. But they’re sent away with thirty dollars and ticket to whatever town is on the birth certificate. And they’re starving. And they go with someone who offers them a job hoping that the person is not a trafficker. Awareness doesn’t matter. A safe bed where they can sleep is what matters!”

They spoke about how the atmosphere in Stella’s House is that of a family. They appreciate the way they have a father and mother in Philip and Chrissie Cameron.

The audience started to give to Stella’s Voice to provide the finances needed to ship food and supplies to Moldova. Suddenly, it was an avalanche of support as thousands were given to offset any costs Stella’s Voice would have in shipping.

Philip and the girls of Stella’s Voice will be ministering on Grace Street Thursday night at 7!