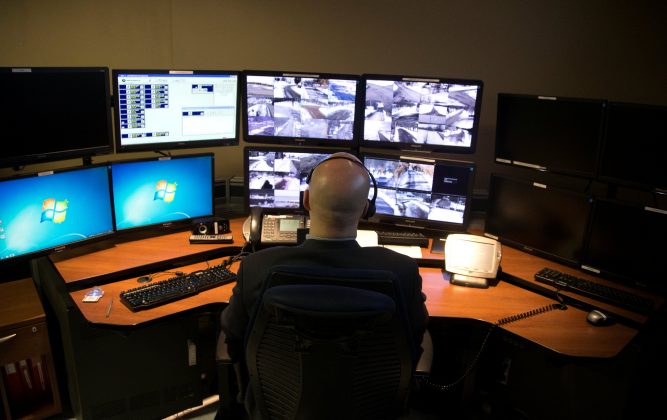 A telecommunications operator looks at video from different U.S.-Canada border spots allowed to be shown to the media during a Royal Canadian Mounted Police tour of their facilities in Montreal, Quebec Canada February 20, 2017 REUTERS/Christinne Muschi

HEMMINGFORD, Quebec (Reuters) – Canadian police said on Monday they had bolstered their presence at the Quebec border and that border authorities had created a temporary refugee center to process a growing number of asylum seekers crossing from the United States.

The Canada Border Services Agency, or CBSA, said at a news conference that it had converted an unused basement into a refugee claimant processing center. Both the border agency and the Royal Canadian Mounted Police are reassigning staff from other locations in the province, as needed, to accommodate rising demand.

The CBSA said the number of people making refugee claims at Quebec-U.S. border crossings more than doubled from 2015 to 2016. Last month, 452 people made claims in Quebec compared with 137 in January 2016, the agency said.

The influx is straining police, federal government and community resources from the western prairie province of Manitoba, where people arrive frostbitten from hours walking in freezing conditions, to Quebec, where cabs drop asylum seekers off meters away from the Quebec-U.S.border, the border agency said.

Canadian Immigration Minister Ahmed Hussen’s office did not respond to a request for comment on Monday.

A Reuters reporter on Monday saw RCMP officers take in for questioning a family of four – two men, a woman and a baby in a car seat – who had walked across the snowy gully dividing Roxham Road in Champlain, New York, from Chemin Roxham in Hemmingford, Quebec.

“Please explain to her that she’s in Canada,” one Canadian officer told another officer.

Police take people crossing the border in for questioning at the border agency’s office in Lacolle, Quebec, which is the province’s biggest and busiest border crossing. Police identify them and ensure they are not a threat or carrying contraband.

They are then transferred to the CBSA for fingerprinting and further questions. If people are deemed a threat or flight risk, they are detained. If not, they can file refugee claims and live in Canada while they wait for a decision

“It’s touching, and we are not insensitive to that,” Bryan Byrne, the RCMP’s Champlain Detachment commander, told reporters near the border. “Some of these people had a long journey. Some are not dressed for the climate here.”

Asylum seekers cross illegally because Canada’s policy under the Canada-U.S. Safe Third Country Agreement is to turn back refugees if they make claims at border crossings. But as U.S. President Donald Trump cracks down on illegal immigrants, Amnesty International and refugee advocacy groups are pressuring the Canadian government to abandon the agreement, arguing the United States is no safe haven.

On Monday, Montreal, Canada’s second most populous city, voted to declare itself a “sanctuary city,” making it the fourth Canadian city to protect illegal immigrants and to provide services to them.