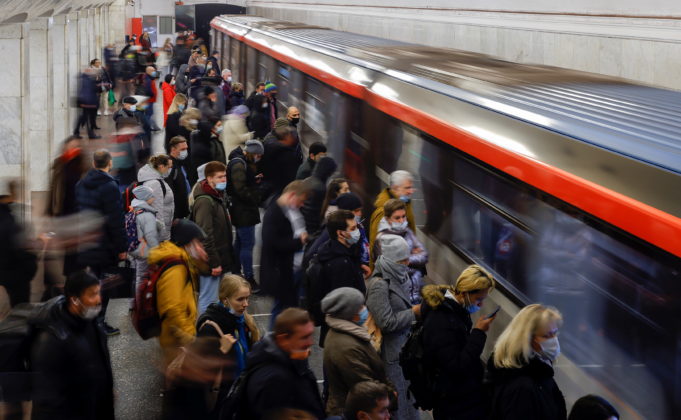 Passengers wait before boarding a train at Kurskaya metro station, after some of the partial lockdown measures imposed to curb the spread of the coronavirus disease (COVID-19) were lifted by local authorities, in Moscow, Russia November 8, 2021. REUTERS/Evgenia Novozhenina

MOSCOW (Reuters) – Most Russians went back to work on Monday for the first time in more than a week as a nationwide workplace shutdown was lifted across most regions, even though the numbers of new COVID-19 cases and deaths are hovering near record daily highs.

President Vladimir Putin announced last month that Oct. 30 to Nov. 7 would be paid “non-working days” – an attempt to slow the surge in cases by imposing the strictest nationwide restrictions since the early months of the pandemic last year.

But officials on Monday reported 1,190 nationwide coronavirus-related deaths in the last 24 hours, higher than in the days before the enforced work break and just five short of the record reported last Thursday.

The Kremlin said it was early to judge the impact of the shutdown yet, but it cited Moscow’s mayor, a close Putin ally, as saying the epidemic in the capital was stabilizing.

Immunologist Nikolay Kryuchkov told Reuters he was skeptical of the effectiveness of the work pause, which only a handful of Russia’s more than 80 regions have chosen to extend into this week.

“I think it will either have a weak effect or a very weak effect,” Kryuchkov said. “It has to be longer and fuller… This is not the same as a European lockdown. It’s a much softer version.”

While people were not meant to work during the lockdown, there was nothing to stop them socializing or travelling in Russia or abroad. Travel agents reported a boom in people flying off on foreign beach holidays.

In Moscow, all shops apart from pharmacies and supermarkets were meant to close, but some pubs and beauty salons were still working.

Kryuchkov said rather than relaxing the curbs, regions such as Moscow and St Petersburg should be expanding them and keeping them in place for longer.

“I fear there is going to be a significant period in which we stay at the same point (in the pandemic) and then it will go down and the rate is going to slowly fall. That is not a very good scenario,” he said.

The Kremlin has said it is up to regional authorities to tailor their lockdowns to match the severity of the outbreaks they face.

Many regions that have lifted the workplace shutdown will now require visitors to present a QR code on their mobile phones when visiting cafes, restaurants or shopping centers to prove they have been vaccinated or previously had the virus.

The situation in the region surrounding Moscow remained “tense”, but the number of people being rushed to hospital has stabilized over the last week, a senior local health official was quoted by TASS news agency as saying.

The recent surge in COVID-19 inpatients has put oxygen supplies under strain, and the Russian navy’s Baltic Fleet said it had handed over five tonnes of liquefied oxygen to help treat hospital patients, the Interfax news agency reported.