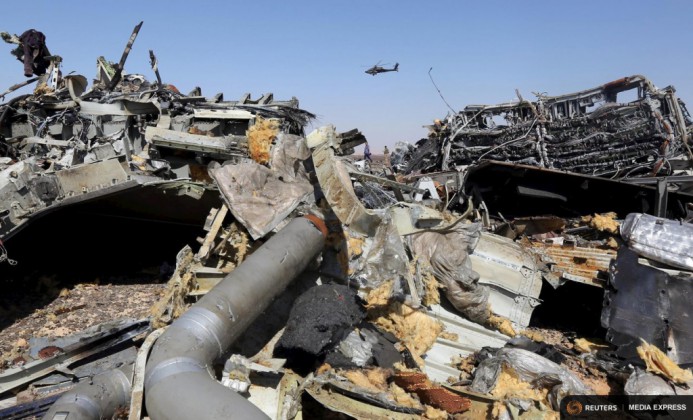 Luke 21:9-10: [Jesus said] "When you hear of wars and revolutions, do not be frightened. These things must happen first, but the end will not come right away." Then he said to them, "Nation will rise against nation, and kingdom against kingdom."

The explosion of a Russian jetliner that took off from Sinai was the result of a terrorist attack according to Russia’s chief intelligence officer, Alexander Bortnikov.  The mid-air explosion of  the Russian jetliner over the Sinai desert last month  killed all 224 people on board .“Traces of foreign explosives” were found on debris from the Airbus plane, FSB chief Alexander Bortnikov told Russian President Vladimir Putin.

According to Reuters, Putin ordered the Russian navy in the eastern Mediterranean to coordinate its actions on the sea and in the air with the French navy, after the Kremlin used long-range bombers and cruise missiles in Syria and announced it would expand its strike force by 37 planes.

During a Kremlin meeting broadcasted on Tuesday, Putin addressed the Russian people.

“The murder of our people in Sinai is among the bloodiest crimes in terms of victims. We will not wipe away the tears from our soul and hearts. This will stay with us forever but will not stop us finding and punishing the criminals.”

Putin then promised, “We will find them anywhere on the planet and punish them. Our air force’s military work in Syria must not simply be continued. It must be intensified in such a way that the criminals understand that retribution is inevitable.”

The FSB security service announced a bounty of $50 million to find those responsible and said that award would be paid out for information that helps detain persons who blew up the Russian plane in Egypt.

According to several news reports, Egyptian authorities have detained two employees of Sharm al-Sheikh airport, where the downed plane originated, for questioning, two security officials and an airport employee said on Tuesday.

Most of the A321 passengers on the doomed plane were Russian tourists flying home from the Red Sea resort of Sharm el-Sheikh.