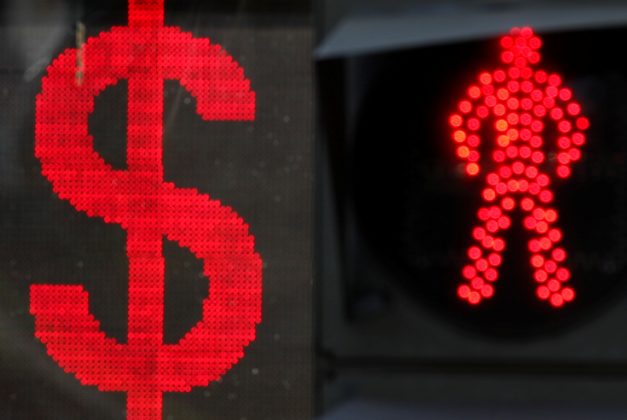 The U.S. dollar sign is seen on an electronic board next to a traffic light in Moscow, Russia August 10, 2018. REUTERS/Maxim Shemetov

By Andrew Osborn and Andrey Ostroukh

MOSCOW (Reuters) – Russia warned the United States on Friday it would regard any U.S. move to curb the activities of its banks as a declaration of economic war which it would retaliate against, stepping up a war of words with Washington over spiraling sanctions.

The warning, from Prime Minister Dmitry Medvedev, reflects Russian fears over the impact of new restrictions on its economy and assets, including the rouble which has lost nearly six percent of its value this week on sanctions jitters.

Economists expect the economy to grow by 1.8 percent this year. But if new sanctions proposed by Congress and the State Department are implemented in full, something that remains uncertain, some economists fear growth would be almost cut to zero in future.

In a sign of how seriously Russia is taking the threat, President Vladimir Putin discussed what the Kremlin called “possible new unfriendly steps by Washington” with his Security Council on Friday.

Moscow’s strategy of trying to improve battered U.S.-Russia ties by attempting to build bridges with President Donald Trump is backfiring after U.S. lawmakers launched a new sanctions drive last week because they fear Trump is too soft on Russia.

That, in turn, has piled pressure on Trump to show he is tough on Russia ahead of mid-term elections.

On Wednesday, the State Department announced a new round of sanctions that pushed the rouble to two-year lows and sparked a wider sell-off over fears Russia was locked in a spiral of never-ending sanctions.

Separate legislation introduced last week in draft form by Republican and Democratic senators, dubbed “the sanctions bill from hell” by one of its backers, proposes curbs on the operations of several state-owned Russian banks in the United States and restrictions on their use of the dollar.

Medvedev said Moscow would take economic, political or other retaliatory measures against the United States if Washington targeted Russian banks.

“I would not like to comment on talks about future sanctions, but I can say one thing: If some ban on banks’ operations or on their use of one or another currency follows, it would be possible to clearly call it a declaration of economic war,” said Medvedev.

“And it would be necessary, it would be needed to react to this war economically, politically, or, if needed, by other means. And our American friends need to understand this,” he said, speaking on a trip to the Russian Far East. 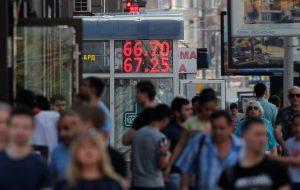 Pedestrians walk by an electronic board showing currency exchange rates of the U.S. dollar against Russian rouble in Moscow, Russia August 10, 2018. REUTERS/Maxim Shemetov

In practice, however, there is little Russia could do to hit back at the United States without damaging its own economy or depriving its consumers of sought-after goods, and officials in Moscow have made clear they do not want to get drawn into what they describe as a mutually-damaging tit-for-tat sanctions war.

The threat of more U.S. sanctions kept the rouble under pressure on Friday, sending it crashing past two-year lows at one point before it recouped some of its losses.

The Russian central bank said the rouble’s fall to multi-month lows on news of new U.S. sanctions was a “natural reaction” and that it had the necessary tools to prevent any threat to financial stability.

One tool it said it might use was limiting market volatility by adjusting how much foreign currency it buys. Central bank data showed on Friday it had started buying less foreign currency on Wednesday, the first day of the rouble’s slide.

The fate of the U.S. bill Medvedev was referring to is not certain.

The full U.S. Congress will not be back in Washington until September, and even then, congressional aides said they did not expect the measure would pass in its entirety.

While it was difficult to assess so far in advance, they said it was more likely that only some of its provisions would be included as amendments in another piece of legislation, such as a spending bill Congress must pass before Sept. 30 to prevent a government shutdown.