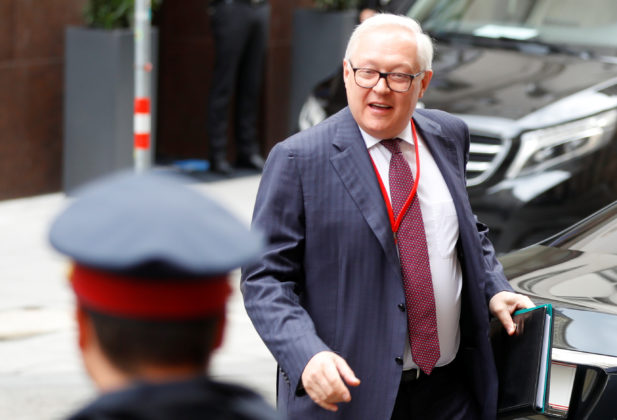 MOSCOW (Reuters) -Russia warned Britain and the United States on Friday against “tempting fate” by sending warships to the Black Sea, and said it would defend its borders using all possible means including military force.

In a statement broadcast on state television, the Defense Ministry said it was ill-advised for British and U.S. vessels to approach the coast of Crimea, a peninsula Moscow annexed from Ukraine in 2014.

“We call on the Pentagon and the British navy, which are sending their warships into the Black Sea, not to tempt fate in vain,” Major General Igor Konashenkov, the ministry’s spokesperson, said.

HMS Defender, a British destroyer that sailed through waters off Crimea on Wednesday, was “not more than a target” for the Black Sea fleet’s defenses, he said.

Russia considers Crimea part of its territory, but the peninsula is internationally recognized as part of Ukraine.

Russia said on Wednesday it had fired warning shots and dropped bombs in the path of a British warship to chase it out of Black Sea waters off the coast of Crimea.

Britain rejected Russia’s account of the incident. It said it believed any shots fired were a pre-announced Russian “gunnery exercise”, and that no bombs had been dropped.

It confirmed HMS Defender had sailed through what it said were waters belonging to Ukraine.

The British embassy in Tbilisi, the capital of Georgian the South Caucasus, wrote on Twitter on Friday that HMS Defender was set to arrive in the port city of Batumi on the eastern coast of the Black Sea.

Deputy Foreign Minister Sergei Ryabkov said separately that Washington and London were sowing strife by failing to accept Crimea was part of Russia, and that Russia was ready to defend its borders using all means, including military force.

Moscow warned Britain on Thursday that it would bomb British naval vessels in the Black Sea if what it called provocative actions by the British navy were repeated off the Crimean coast.

Russia’s Defense Ministry said separately on Friday that it was beginning joint navy and air force exercises in the eastern Mediterranean, where Moscow operates an air base on Syria’s coast.