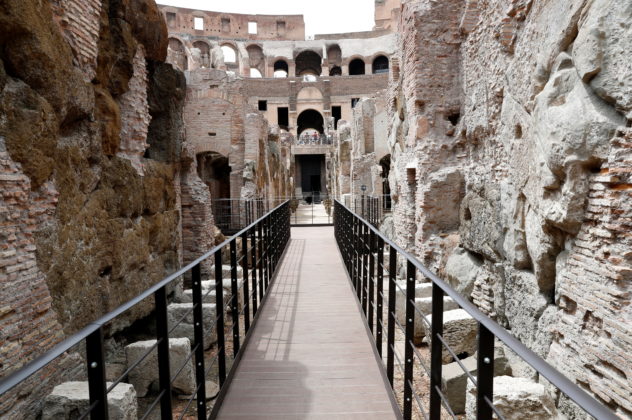 View of the Colosseum dungeons which have been restored in a multi-million euro project sponsored by fashion group Tod's in Rome, Italy, June 24 2021. Picture taken June 24 2021. REUTERS/Remo Casilli

By Giulia Segreti and Francesca Piscioneri

ROME (Reuters) – “The beating heart of Rome is not the marble of the Senate, it’s the sand of the Colosseum,” the Roman senator Gracchus said in the 2000 Oscar-winning movie “Gladiator”.

The towering 2,000-year-old stone amphitheater, the biggest in the Roman empire, is Italy’s most popular tourist attraction, drawing 7.6 million visitors in 2019.

But its own beating heart, the underground passages, cages and rooms where prisoners, animals and gladiators waited to pass through trapdoors to enter the arena above their heads – itself long gone – only opened to the paying public on Friday after lengthy renovations.

More than 80 archaeologists, architects and engineers worked on the 15,000 square meter “hypogeum” for two years to “bring back to the center of the attention a monument that the whole world loves,” according to Diego della Valle, chairman of Tod’s, the Italian fashion group that funded the work.

The circular balconies, long accessible to tourists, used to accommodate up to 70,000 spectators to watch gladiator fights, executions and animal hunts. The arena could also – before the hypogeum was built – be filled with water to re-enact sea battles.

Now a new 160 meter (525 ft) walkway reveals a part of the monument that has not been accessible to visitors.

It is the second part of a three-stage process that started eight years ago, with Tod’s pledging 25 million euros ($30 million) to pay for the project — one of a number of restorations of Italian landmarks funded by luxury goods firms.

“It is … important for relevant companies to make themselves available to the country, understanding what they can do for the country,” Della Valle said.

“This is about important pieces for Italy, monuments that are well-known all over the world, and tourism, which is not only entertainment but an important business in Italy which, if cared for properly, has no rival anywhere in the world.”

The first phase of the makeover, including a cleanup of the façade, was unveiled in 2016. The final phase involves renewing the galleries and the lighting system and creating a new visitor center. The project is set to be completed in about three years.

Separately, the government has decided to provide the ancient Roman landmark with new hi-tech flooring, which is expected to be in place by 2023.