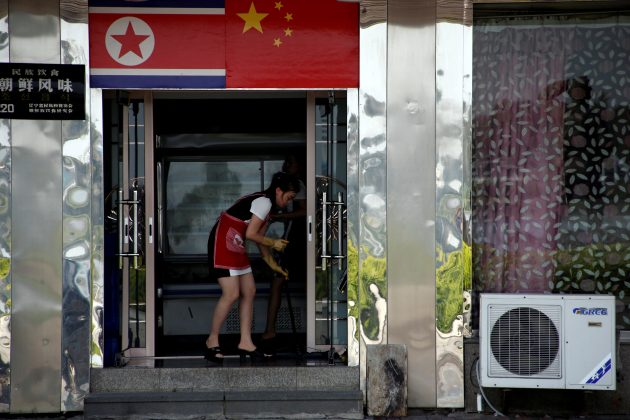 Almost 100,000 overseas workers, based predominantly in China and Russia, funnel some $500 million in wages a year to help finance the North Korean regime, the U.S. government says.

Dandong, a city of 800,000 along the Yalu river that defines the border with North Korea, is home to many restaurants and hotels that hire North Korean waitresses and musicians. Their colorful song and dance performances are a tourist attraction.

Thousands of predominantly female workers are also employed by Chinese-owned garment and electronics factories in Dandong, with a significant proportion of their wages going straight to the North Korean state.

The Wing Cafe used to advertise its “beautiful North Korean” waitresses on its shopfront by the Yalu. The sign is now gone, and cafe staff said the waitresses had returned home in recent weeks after their visas expired.

“There have been changes in government policy,” the manager of another restaurant said. “It’s not convenient to say more.”

HARDER TO SMUGGLE, TOO

Four traders, who deal in goods ranging from iron ore and seafood to ginseng and alcohol, told Reuters the sanctions had all but crippled the usual trade.

More stringent customs checks and patrols by Chinese border police have also made it harder to smuggle goods across the border, according to the traders, who declined to be named due to the subject’s sensitivity.

“The impact has been huge. Dandong’s economy has always counted on border trade,” said one Chinese trader.

In response to Pyongyang’s sixth and largest nuclear test last month, the U.N. Security Council on Sept. 11 passed a resolution prohibiting the use of North Korean workers, strengthening an Aug. 5 resolution that put a cap on the number of workers allowed overseas.

The Sept. 11 sanctions also ordered the closure of all joint business ventures with North Korea and added textiles to a list of banned exports, which already included coal, iron ore and seafood.

In a statement on Thursday, China’s Ministry of Commerce ordered the implementation of the new sanctions across the country within 120 days.

The sanctions allow workers to serve out existing contracts. Business people in Dandong, through which most of trade between the two countries flows, said contracts could not be renewed and new visas were not being approved.

A Chinese supervisor at a factory making electronic wiring for automobiles said while most of its 300 North Korean workers were on multi-year contracts expiring at different times, those who arrived in Dandong after Aug. 5 had already been forced to leave. He did not say how many.

The sanctions have come as a rude jolt to Dandong businesses and traders who had long rolled with North Korea’s unpredictability but believed their neighbor’s economic reliance on China would keep its belligerence in check.

Dandong is one of the larger cities in Liaoning province, whose rustbelt economy has struggled under national campaigns to curb industrial overcapacity and ease pollution. Liaoning was China’s worst performer in the first half of 2017, registering GDP growth of 2.1 percent, compared with the national rate of 6.9 per cent, according to official statistics.

“The economy hasn’t been doing well here for the past two years,” said one trader. “This is making a bad situation worse.”