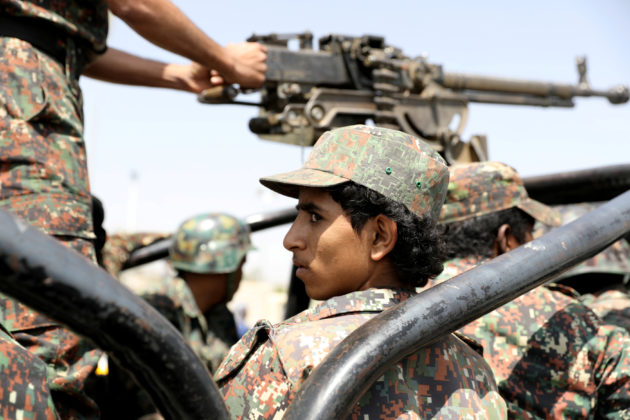 FILE PHOTO: A police trooper rides on the back of a patrol truck during the funeral of Houthi fighters killed during recent battles against government forces, in Sanaa, Yemen September 22, 2020. REUTERS/Khaled Abdullah/File Photo

DUBAI (Reuters) – Saudi Arabia has told Yemen’s Houthis in high-level back channel talks it would sign a UN proposal for a nationwide ceasefire if the Iran-aligned group agrees to a buffer zone along the kingdom’s borders, three sources familiar with the matter said.

If a deal is struck, it would mark the biggest breakthrough in efforts to reach a political settlement since the conflict – widely seen as a proxy war between arch-enemies Saudi Arabia and Iran – began in 2014.

U.S. President-elect Joe Biden pledged in his election campaign to halt arms sales to Saudi Arabia, the Middle East’s biggest buyer of American weapons, to pressure Riyadh to end the war that has caused the world’s worst humanitarian crisis.

But the Houthis, who control northern Yemen and its biggest populated areas, may be less willing to cooperate with Saudi Arabia if President Donald Trump carries out threats to designate them as a foreign terrorist organization (FTO) before leaving office, the sources said.

Washington and Riyadh see the Yemeni group as an extension of Iranian influence in the region.

A spokesman for the Saudi-led coalition and the Houthis’ spokesman did not respond to requests for comment.

Recently the two parties, holding virtual discussions, raised the level of representation in the talks, with Mohammed Abdulsalam, the Houthis’ chief negotiator, and a more senior Saudi official, two of the sources said.

Riyadh has demanded more security assurances from the Houthis, including a buffer zone along the borders with northern Yemen until a U.N.-backed transitional government is formed, the sources said.

Riyadh wants Houthi forces to leave a corridor along the Saudi borders to prevent incursions and artillery fire.

In exchange, the kingdom would ease an air and sea blockade as part of the U.N. proposal for a ceasefire, which already includes an end to cross-border attacks.

Last year, Riyadh launched indirect talks with the Houthis, as it seeks a way out of the conflict that has drawn criticism from Biden, killed tens of thousands of people and tarnished the reputation of Saudi Crown Prince Mohammed bin Salman.

The talks have stalled over the last two months, the sources said, as fighting escalated in the gas-rich region of Marib, where the Houthis have launched an offensive to drive out Saudi-backed forces.

Marib is the last stronghold of the internationally-recognized government of Abd-Rabbu Mansour Hadi, which was ousted from power in the capital, Sanaa, by the Houthis in late 2014.

That prompted the Saudi-led coalition, which also includes the United Arab Emirates, to intervene.

Trump’s administration, to support the Saudis, has exerted pressure on the Houthis by threatening to designate the group as a terrorist organization, said two of the three sources, who declined to be named because they were not authorized to speak to the media.

Any decision by Washington to blacklist the Houthis, part of its “maximum pressure” campaign against Tehran, would be “devastating” after years of peace efforts led by U.N. Special Envoy Martin Griffiths and other Western ambassadors, they added.

One of the sources said that experts in the U.S. administration have advised Trump against an FTO designation.

The State Department did not respond to a Reuters request for comment.

The discreet talks between the kingdom and the Houthis have dragged on for more than a year, in parallel with Griffiths’ efforts to reach an agreement on a ceasefire.

The U.N. is working to secure a face-to-face meeting before the end of the year, as well as an agreement on a joint declaration that would halt all air, ground and naval hostilities, two of the sources said.

Europe would be a logical venue for them to meet, one of the sources said, as the U.N. seeks neutral grounds for the talks. Griffith’s office declined to comment.