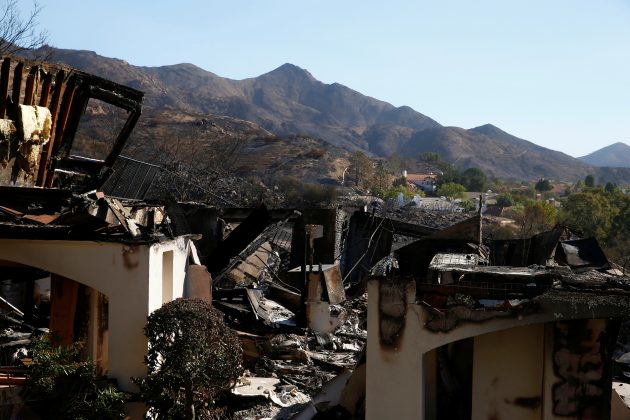 By Sharon Bernstein and Noel Randewich

PARADISE, Calif. (Reuters) – Search teams were set to sift through the charred wreckage of Paradise, California, on Tuesday in the search of human remains as authorities investigated the cause of state’s deadliest-ever wildfire. 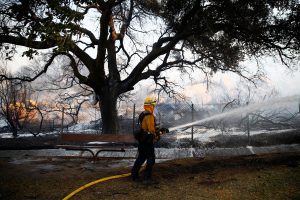 The “Camp Fire” blaze, still raging in northern California, has killed at least 42 people and left 228 others listed as missing.

Another two people died in the separate “Woolsey Fire,” which has destroyed 435 structures and displaced about 200,000 people in the mountains and foothills near Southern California’s Malibu coast, west of Los Angeles.

Authorities are probing the cause of the fires. A spokeswoman for the California Public Utilities Commission told the Chico Enterprise-Record on Monday the regulator has launched investigations that may include an inspection of the fire sites once the California Department of Forestry and Fire Protection (Cal Fire) allows.

The Camp Fire – California’s most destructive on record – has consumed more than 7,100 homes and other buildings since igniting on Thursday in Butte County’s Sierra foothills, about 175 miles (280 km) north of San Francisco. 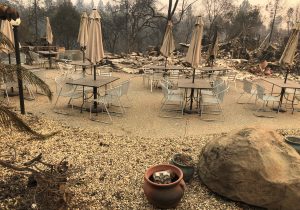 Cafe tables and umbrellas stand idle as the remains of Mama Celeste’s Gastropub and Pizzeria lies in ruins after wildfires devastated the area in Paradise, California, U.S., November 12, 2018. REUTERS/Sharon Bernstein

Nearly 9,000 firefighters have been battling the wildfires. Cal Fire said that 16 other states, including Oregon, Texas, Missouri, and Georgia, have sent fire crews or other resources to combat the fires.

Most of the Camp Fire’s destruction and deaths occurred in and around Paradise, a town of nearly 27,000 people that was virtually destroyed overnight Thursday, just hours after the blaze erupted. Some 52,000 people remained under evacuation orders, Sheriff Honea said.

Authorities said on Monday they found the bodies of 13 more victims, bringing the total killed by the Camp Fire to 42.

This makes it California’s deadliest ever wildfire, surpassing the death toll of 29 in the 1933 Griffith Park blaze in Los Angeles.

PG&E Corp, which operates in northern California, and Edison International, the owner of Southern California Edison Co, have reported to regulators that they experienced problems with transmission lines or substations in areas where fires were reported around the time they started.

Speaking to KRCR TV early Tuesday, PG&E spokesman Blair Jones said prior to the outbreak of the Camp Fire, the site had not been “an area we were looking as a potential shut-off area.”

More than 15,000 structures were threatened by the Camp Fire on Monday in an area where smoke had reduced visibility to under half a mile in some places.

To the south, Woolsey Fire has blackened nearly 94,000 acres and was also 30 percent contained as of Monday night, according to Cal Fire.

Winds of up to 40 miles per hour (60 km per hour) were expected to continue in Southern California through Tuesday, heightening the risk of fresh blazes ignited by scattered embers. Cal Fire said 57,000 structures were still in harm’s way from the Woolsey Fire.

Some evacuees in Malibu, a seaside community whose residents include a number of Hollywood celebrities, were allowed to return home Monday but found themselves without power or cell phone service.

California has recently endured two of the worst wildfire seasons in its history, a situation experts attribute in large part to prolonged drought across much of the western United States.

(Reporting by Brendan O’Brien in Milwaukee; Editing by Peter Graff and Steve Orlofsky)