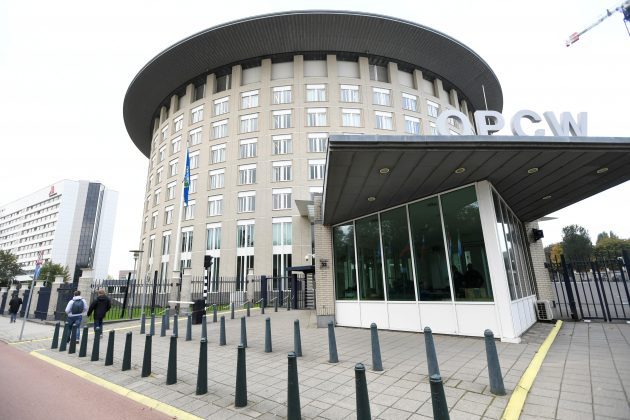 FILE PHOTO: The headquarters of the Organization for the Prohibition of Chemical Weapons (OPCW) is pictured in The Hague, Netherlands, October 4, 2018. REUTERS/Piroschka van de Wouw/File Photo

THE HAGUE (Reuters) – The global chemical weapons watchdog will in February begin to assign blame for attacks with banned munitions in Syria’s war, using new powers approved by member states but opposed by Damascus and its key allies Russia and Iran.

The agency was handed the new task in response to an upsurge in the use of chemical weapons in recent years, notably in the Syrian conflict, where scores of attacks with sarin and chlorine have been carried out by Syrian forces and rebel groups, according to a joint United Nations-OPCW investigation.

A core team of 10 experts charged with apportioning blame for poison gas attacks in Syria will be hired soon, Fernando Arias, the new head of the Organisation for the Prohibition of Chemical Weapons (OPCW), told the Foreign Press Association of the Netherlands on Tuesday.

The Syria team will be able to look into all attacks previously investigated by the OPCW, dating back to 2014.

The OPCW was granted additional powers to identify individuals and institutions responsible for attacks by its 193 member states at a special session in June. The decision was supported by the United States and European Union but opposed by Russia, Iran, Syria, and their allies, highlighting deep political division at the agency.

“The mandate is to identify the perpetrators of crimes committed with chemical weapons, but the OPCW is not a court or the police”, and will refer cases to U.N. organizations with powers to punish those responsible, Arias said.

The expert team will “be in charge of identifying the perpetrators for Syria in the first stage”, Arias said, and might later be expanded to look at attacks globally.

The June decision followed attacks with other chemical weapons. In Salisbury, England, a former Russian spy and his daughter were poisoned in March with the military-grade nerve agent novichok, and the half-brother of North Korean leader Kim Jong Un was assassinated in Malaysia with VX in February 2017.