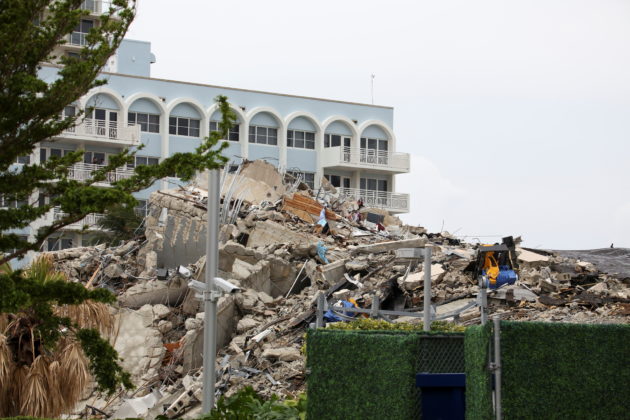 SURFSIDE, Fla. (Reuters) -Search and rescue workers on Wednesday recovered 10 more bodies from the rubble of an apartment block outside Miami that collapsed last month, bringing the death toll to 46, as hopes faded that any of the 94 people still unaccounted for would be found alive.

The effort to locate survivors of the Champlain Towers South building continued in warm, dry conditions with the threat from Tropical Storm Elsa, battering the opposite side of Florida, having receded.

Miami-Dade Mayor Daniella Levine Cava told a briefing that in addition to the 46 confirmed dead, 94 others who may have been inside the building in Surfside when it partially collapsed on June 24 were still unaccounted for.

Levine Cava, who shed tears as she repeated her remarks in Spanish, said the rescue effort had been made easier by the planned demolition on Sunday night of the half of building that had remained standing.

“The team continues to make progress in the areas of the pile that was inaccessible prior to the demolition,” Levine Cava said.

As she spoke, a new shift of workers walked by in small groups, wearing clean uniforms and not sharing a word with each other, while a group leaving the rubble pile looked exhausted and were drenched in sweat.

Though local officials say they have not given up hope of finding survivors, no one has been discovered alive in the rubble since the first few hours after the building came down.

Asked about whether continuing the search was giving families false hope, Levine Cava said: “They are being supported to come to closure as soon as possible.”