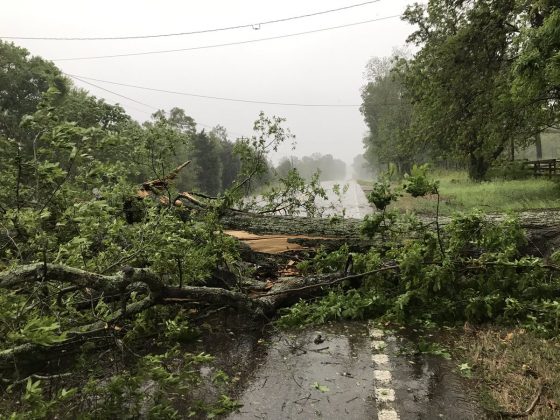 (Reuters) – A second wave of tornadoes and thunderstorms to hit the U.S. South and Midwest this week turned deadly on Thursday with three people reported killed, as the storms pushed eastward on Friday, officials and media accounts said.

One person was killed after a tree fell on his vehicle in Neshoba County, Mississippi, Thursday afternoon, the local paper, the Neshoba Democrat, reported.

A second death was reported in St. Clair County, Mississippi, after a tree fell on a home, late Thursday, according to AccuWeather.

A third death was reported late Thursday in the Wattsville community, north of Pell City, Alabama, the National Weather Service (NWS) reported, after a tree fell on a home.

The deaths come in the wake of at least five people, including three children, who were killed last weekend in a storm system that drove more than three dozen tornadoes across the U.S. South.

Communities in central Texas and western Louisiana, already hit by flash floods and twisters in the first round last weekend, were hit once more by high winds, twisters, egg-sized hail and intense rain Thursday and Friday, according to AccuWeather and the NWS.

In the latest storm system, multiple possible tornadoes hit southwest and central Mississippi Thursday night and early Friday, the NWS said, but the damage will have to be surveyed before confirmation of twisters.

“We’re still under some severe storm warnings, tornado watches and flood warnings into this morning and the afternoon across a broad swipe of the U.S.,” said NWS meteorologist Bob Oravec early Friday.

“The severe thunderstorms will impact the deep South and southeastern U.S., through Georgia and the Florida panhandle, before it heads up the Atlantic Coast,” he said.

The storm system will lose much of its punch late in the weekend, but the East Coast should expect a soggy Easter, Oravec said.

Power outages were reported early Friday in Texas, Mississippi, Alabama and Tennessee, affecting a total of about 91,800 homes and businesses, according to the tracking site PowerOutage.Us.