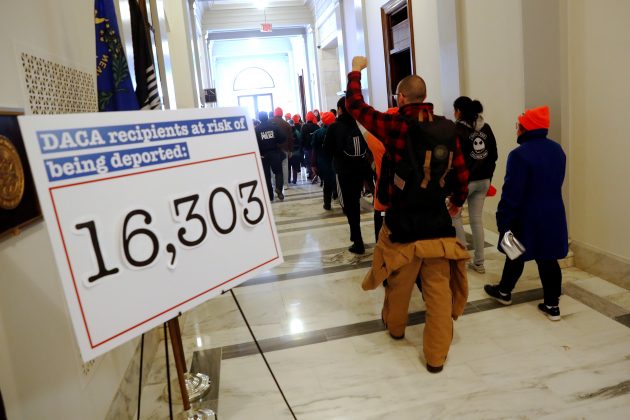 Demonstrators calling for new protections for so-called "Dreamers," undocumented children brought to the U.S. by their immigrant parents, walk through a senate office building on Capitol Hill in Washington, U.S. January 17, 2018. REUTERS/Jonathan Ernst

By Susan Heavey and Richard Cowan

In a statement overnight, the Department of Homeland Security dismissed what some thought was the bill most likely to win enough bipartisan support to pass the chamber, saying it failed to meet minimum criteria set out by President Donald Trump.

The plan, crafted by a bipartisan group of senators led by moderate Republican Susan Collins, would protect from deportation 1.8 million young adults who were brought to the United States illegally as children and who are known as Dreamers.

It also includes a $25 billion fund to strengthen border security and possibly even construct segments of Trump’s long-promised border wall with Mexico.

The immigration issue has become a matter of urgency for lawmakers after Trump in September ordered an Obama-era program that protected Dreamers to end by March 5, telling Congress it should come up with a solution by then.

The Department of Homeland Security blasted the Collins-led plan, saying it destroyed the ability of DHS officers to remove millions of undocumented immigrants from the country, and “is an egregious violation of the four compromise pillars laid out by the President’s immigration reform framework.”

Trump’s four provisions are for any bill to include funds to build the border wall, to end the visa lottery program, to impose curbs on visas for the families of legal immigrants, and to protect Dreamers.

The Republican president has backed a bill by Republican Senator Chuck Grassley that embraces Trump’s wish list but is unlikely to win support from enough Democrats in the closely-divided chamber.

A narrower third bill, by Republican John McCain and Democrat Chris Coons, has been dismissed by Trump.

Senate Majority Leader Mitch McConnell was expected to bring forward all three measures on Thursday to gauge which has enough support to move toward a vote in the Senate ahead of a Friday deadline he has imposed for the legislation.

Despite backing from several Republicans for the Collins-led plan, it was unclear if enough Democrats would get behind it to muster the 60 votes needed in the 100-member Senate that Republicans control 51-49.

Democratic U.S. Senator Tim Kaine told MSNBC on Thursday he thought lawmakers were “very close” to the 60 votes needed on the Collins-led measure. Republican Senator Marco Rubio told Fox News he was unsure whether any Senate plan would move forward.

Even if one of three bills passes, it must still win over the U.S. House of Representatives, where Republicans hold a larger majority and are pushing a more conservative proposal that is closer in line with Trump’s framework.

U.S. House Speaker Paul Ryan has said he will support only legislation backed by Trump, who has carried his tough law-and-order stance toward immigrants from his 2016 campaign into his administration.