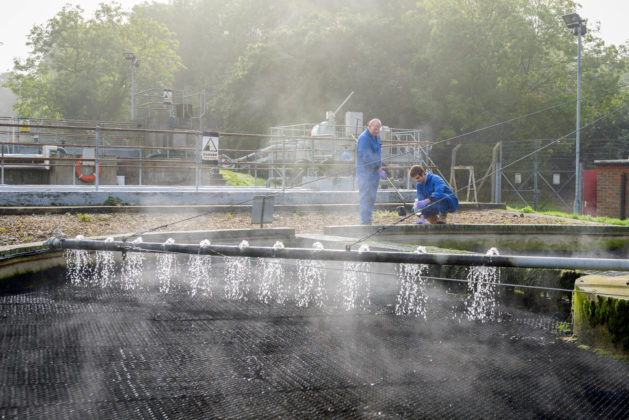 TORONTO (Reuters) – Early in the pandemic, a few cities and countries around the world began testing sewage for evidence of the coronavirus, hoping to detect rising infections early.

Now some researchers are fine-tuning that strategy by moving upstream to test waste from single hospitals or other buildings, aiming to quickly pinpoint burgeoning COVID-19 outbreaks and stop them with testing and isolation.

While the virus primarily spreads through droplets expelled from the mouth and nose, it can also be shed via human waste.

Testing sewage is cheaper and less invasive than swabbing hundreds of people, and it could be done more frequently. With the virus again surging across much of the world, schools, hospitals and care homes badly need to catch new cases early.

“What we’re trying to do is identify outbreaks before they happen,” said Francis Hassard, a lecturer at Cranfield University, part of a project that started collecting samples at 20 London secondary schools last month.

Hassard’s UK government-funded team will expand sampling to at least 70 schools. The program is a research project, meant to test the approach, and is not yet a full-fledged surveillance system.

In the Canadian province of Alberta, researchers at the University of Calgary have been gathering samples from three local hospitals, including the site of a recent outbreak in which 12 people died.

The team was still refining their methods when that outbreak began. When they went back to test wastewater, they found the amount of coronavirus genetic material rose 580% as the virus spread, said Kevin Frankowski, executive director of Advancing Canadian Wastewater Assets.

“We saw a very significant change,” said Frankowski. “It was really strong proof that this … approach works.”

The project shares data with Alberta Health Services, which runs the province’s hospitals. If levels spike again, they could respond by testing individuals or taking other steps to mitigate spread, depending on the situation, said Frankowski.

CLOSE TO THE SOURCE

However, it can take 24-to-36 hours for waste to arrive at a treatment plant, and heavy rain or industrial effluent can dilute samples.

When viral levels rise at a treatment plant, it is not always obvious what should be done. But when virus material suddenly appears in sewage leaving a single building, the path forward is more clear.

At the University of Arizona, for example, sewage from one residence turned positive on August 25. The next day, the university began testing students. Two tested positive and were isolated, heading off what could have been an outbreak, the school said in a release.

With most of these efforts in early stages, it is not yet clear how well the approach will work at scale.

Not every infected person sheds virus in their waste, and there is some disagreement among researchers on how early in the course of COVID-19 that shedding begins on average.

Human behavior can affect data collection. Do enough children use the bathroom at school to generate good data? The virus does not show up in urine, just solid waste.

There are also logistical issues.

“Buildings have multiple discharge points,” said GHD’s Capponi. “Some of them are not accessible. Some may show up on a design drawing, but were not constructed that way.”

Outside the controlled environment of a treatment plant, sewage is less uniform. Sampling equipment can get clogged with toilet paper and other debris, said Hassard.

And a single “grab” sample might miss the virus. The UK project collects throughout the school day.

Higher-tech auto-samplers can collect waste over a longer period, but are in increasingly short supply as more testing programs ramp up.

The company has doubled production, a spokeswoman said, after an “unprecedented surge in demand” from governments hoping to test for the virus.

(Reporting by Allison Martell in Toronto; Edilting by Caroline Humer and Bill Berkrot)