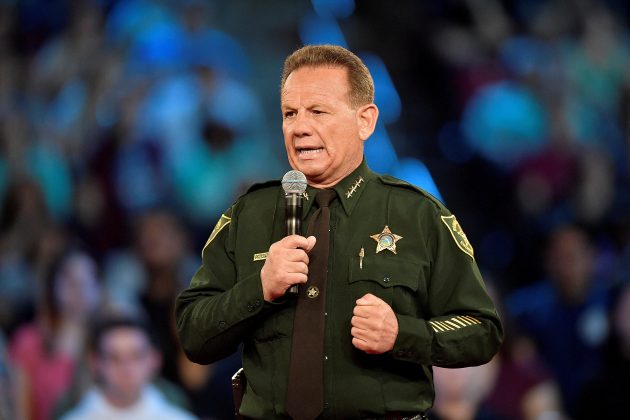 By Steve Gorman and Daniel Trotta

(Reuters) – A Florida sheriff came under mounting criticism on Sunday for his deputies’ response to this month’s deadly high school shooting and potential warning signs as dozens of state lawmakers called for his ouster and the governor ordered an independent inquiry.

Broward County Sheriff Scott Israel insisted that only one of his armed deputies is so far known to have been at fault for staying outside the school while it was under attack rather than entering to confront the gunman who shot 17 people to death.

That deputy, identified as the school’s assigned resource officer, Scot Petersen, has resigned rather than face suspension and possible dismissal after his actions were caught on video during the massacre, the sheriff acknowledged last week.

News outlets including CNN and NBC have since reported that at least three more armed Broward County sheriff’s deputies were present on the scene, taking cover behind their vehicles instead of immediately going into the school.

Israel sought to dismiss those reports, based on unnamed sources from the neighboring Coral Springs Police Department, which also responded to the shooting.

“Our investigation to this point shows that during this horrific attack, while this killer was inside the school, there was only one law enforcement person, period, and that was former deputy Scot Peterson,” Israel said in a CNN interview on Sunday.

Israel did not rule out, however, that the investigation could find other deputies who failed to act properly during or immediately after the Feb. 14 rampage, which authorities said lasted about six or seven minutes.

The sheriff said separately on Twitter that he welcomed an investigation by the Florida Department of Law Enforcement, as requested by Governor Rick Scott, to examine the response by local police and the sheriff’s office.

“This independent, outside review will ensure public confidence in the findings,” Israel said.

Fourteen students and three adult educators were slain when a gunman opened fire with a semiautomatic AR-15-style assault rifle inside Marjory Stoneman Douglas High School in Parkland, an affluent suburb of Fort Lauderdale.

Nikolas Cruz, a 19-year-old former student who was expelled last year for disciplinary problems, was later arrested and charged with 17 counts of premeditated murder.

Authorities have said Cruz made his getaway moments after the shooting by blending in with students fleeing the school and was later apprehended after strolling through a nearby Walmart store and stopping at two fast-food outlets. 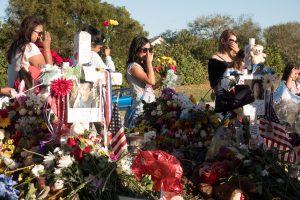 The sheriff rejected calls for his removal as politically motivated and defended his department from criticism that his deputies overlooked a number of telltale signs that Cruz posed a threat of violence.

“I can only take responsibility for what I knew about,” Israel, a Democrat, told CNN, adding that he had “given amazing leadership” since he was first elected sheriff in 2012.

Besides Peterson’s resignation, Israel has previously said two other deputies have been placed on restricted duty pending an internal review of whether they properly handled two telephone tips – from 2016 and 2017 – warning that Cruz was collecting weapons and might be inclined to commit a school shooting.

The sheriff told CNN on Sunday that 16 other “calls for service” his department received about Cruz before the massacre were properly handled. Others disagreed.

A letter on Sunday signed by 74 Republican members of the Florida House of Representatives urged Scott, also a Republican, to suspend Israel under a provision of the state constitution that lets the governor remove a sheriff for “malfeasance, misfeasance, neglect of duty [or] incompetence.”

“In the years leading up to this unspeakable tragedy, Sheriff Israel, his deputies and staff ignored repeated warning signs about the violent, erratic, threatening and antisocial behavior” of the accused gunman, the letter said. It cited additional questions raised about the actions of the first deputies on the scene of the shooting.

The Federal Bureau of Investigation also has drawn public outrage by acknowledging it failed to follow proper protocols after receiving a tip that Cruz possessed a gun, had indicated the desire to kill and could carry out a school shooting.

FBI officials have told families of victims they “deeply regret” their mishandling of the matter.

(Reporting by Steve Gorman in Los Angeles and Daniel Trotta in New York; Editing by Jeffrey Benkoe and Daniel Wallis)