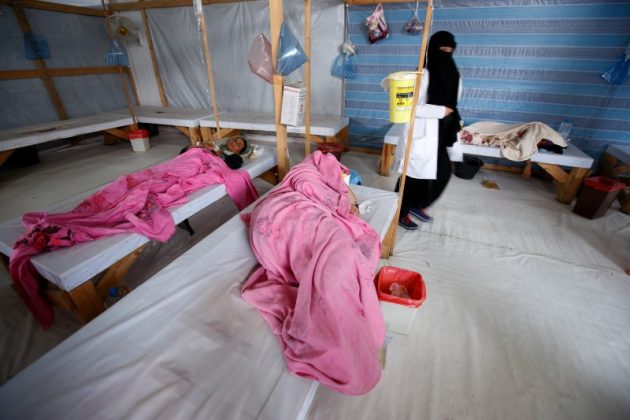 FILE PHOTO: A nurse walks by women being treated at a cholera treatment center in the Red Sea port city of Hodeidah, Yemen October 8, 2017. REUTERS/Abduljabbar Zeyad

RIYADH (Reuters) – The World Health Organization warned on Monday that a cholera epidemic in Yemen that killed more than 2,000 people could flare up again in the rainy season.

WHO Deputy Director General for Emergency Preparedness and Response Peter Salama said the number of cholera infections had been in decline in Yemen over the past 20 weeks after it hit the 1 million mark of suspected cases.

“However, the real problem is we’re entering another phase of rainy seasons,” Salama told Reuters on the sidelines of an international aid conference in Riyadh.

“Usually cholera cases increase corresponding to those rainy seasons. So we expect one surge in April, and another potential surge in August.”

A proxy war between Iran-aligned Houthis and the internationally recognized government of President Abd-Rabbu Mansour Hadi, which is backed by a Saudi-led alliance, has killed more than 10,000 people since 2015, displaced more than 2 million and destroyed much of the country’s infrastructure, including the health system.

Yemen relies heavily on food imports and is on the brink of famine. The United Nations says more than 22 million of Yemen’s 25 million population need humanitarian assistance, including 11.3 million who are in acute need.

Salama said the country had also had an outbreak of diphtheria, a vaccine-preventable disease that usually affects children and which has largely been eliminated in developed countries.

Both cholera and diphtheria outbreaks are a product of the damage to the health system in the country, he said, adding that less than half of Yemen’s health facilities are fully functioning.

However, Salama said that despite more than 2,000 deaths from cholera, the fatality rate has been low, at around 0.2 to 0.3 percent.

The WHO has approval from the government for vaccination campaigns and is working on ensuring all parties to the conflict implement the plan, he added.