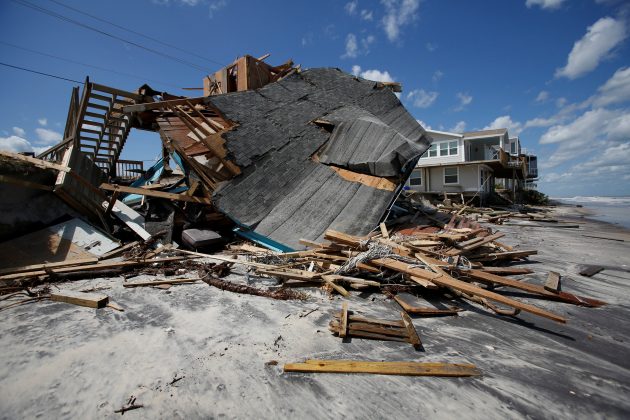 ISLAMORADA, Fla. (Reuters) – Evacuees from Hurricane Irma were early on Wednesday returning to the Florida Keys, where sunrise will give them a first glimpse of devastation that has left countless homes and businesses in ruins.

Categorized as one of the most powerful Atlantic storms on record, Irma claimed more than 60 lives, officials said.

At least 18 people died in Florida and destruction was widespread in the Keys, where Irma made initial U.S. landfall on Sunday to become the second major hurricane to strike the mainland this season.

A resort island chain that stretches from the tip of the state into the Gulf of Mexico, the Keys are connected by a bridges and causeways along a narrow route of nearly 100 miles (160 km).

“I don’t have a house. I don’t have a job. I have nothing,” said Mercedes Lopez, 50, whose family fled north from the Keys town of Marathon on Friday and rode out the storm at an Orlando hotel, only to learn their home was destroyed, along with the gasoline station where she worked.

“We came here, leaving everything at home, and we go back to nothing,” Lopez said. Four families from Marathon including hers planned to venture back on Wednesday to salvage what they can.

The Keys had been largely evacuated by the time Irma barreled ashore as a Category 4 hurricane with sustained winds of up to 130 mph (215 km/hour). 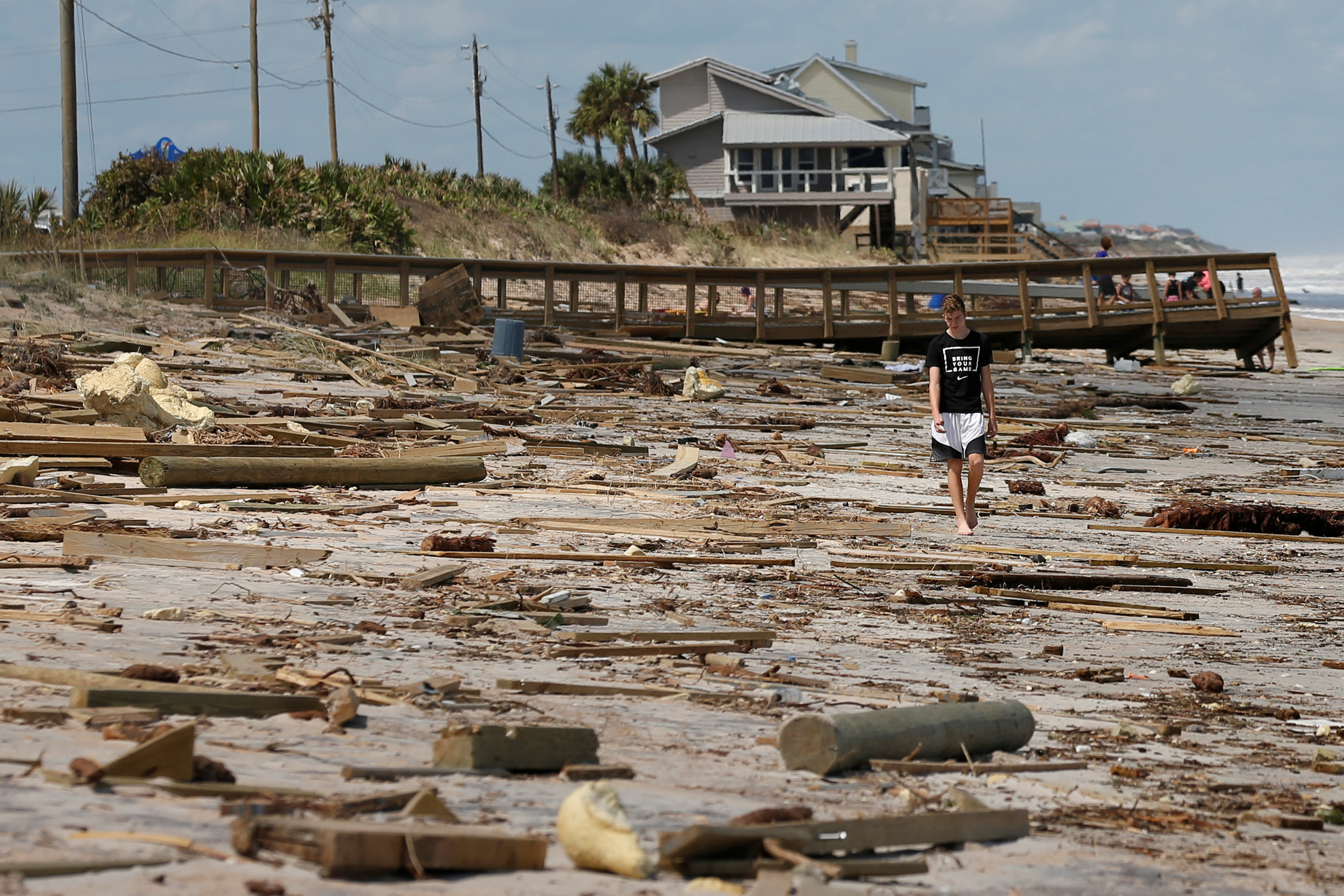 A boy walks amongst debris on the beach after Hurricane Irma passed the area in Ponte Vedra Beach, Florida, U.S., September 12, 2017. REUTERS/Chris Wattie

‘SAILBOAT IN OUR BACKYARD’

Authorities allowed re-entry to the islands of Key Largo, Tavernier and Islamorada for residents and business owners on Tuesday. The extent of the devastation took many of the first returnees by surprise.

“I expected some fence lines to be down and some debris,” said Orlando Morejon, 51, a trauma surgeon from Miami as he hacked away at a tree blocking his Islamorada driveway. “We were not expecting to find someone else’s sailboat in our backyard.”

A boil water notice was in effect for the Keys late on Tuesday, while its airports remained closed to commercial flights.

Several major airports in Florida that had halted passenger operations resumed with limited service on Tuesday, including Miami International, one of the busiest in the United States.

All 42 bridges in Monroe County, which includes the Keys, were deemed safe and one of two washed out sections of U.S. 1 Roadway was now navigable, the county said on its Twitter account.

At the end of Islamorada, roughly the halfway point of the Keys, police at a checkpoint turned around returning residents seeking to travel farther south and waved through utility crews, law enforcement and healthcare workers.

Authorities said they were barring re-entry to the remainder of the Keys to allow more time to restore electricity, water, fuel and medical service. U.S. officials have said some 10,000 Keys residents stayed put when the storm hit and may ultimately need to be evacuated.

Across Florida and nearby states, some 5.8 million homes and businesses were late on Tuesday estimated to be still without power, down from a peak of 7.4 million on Monday. 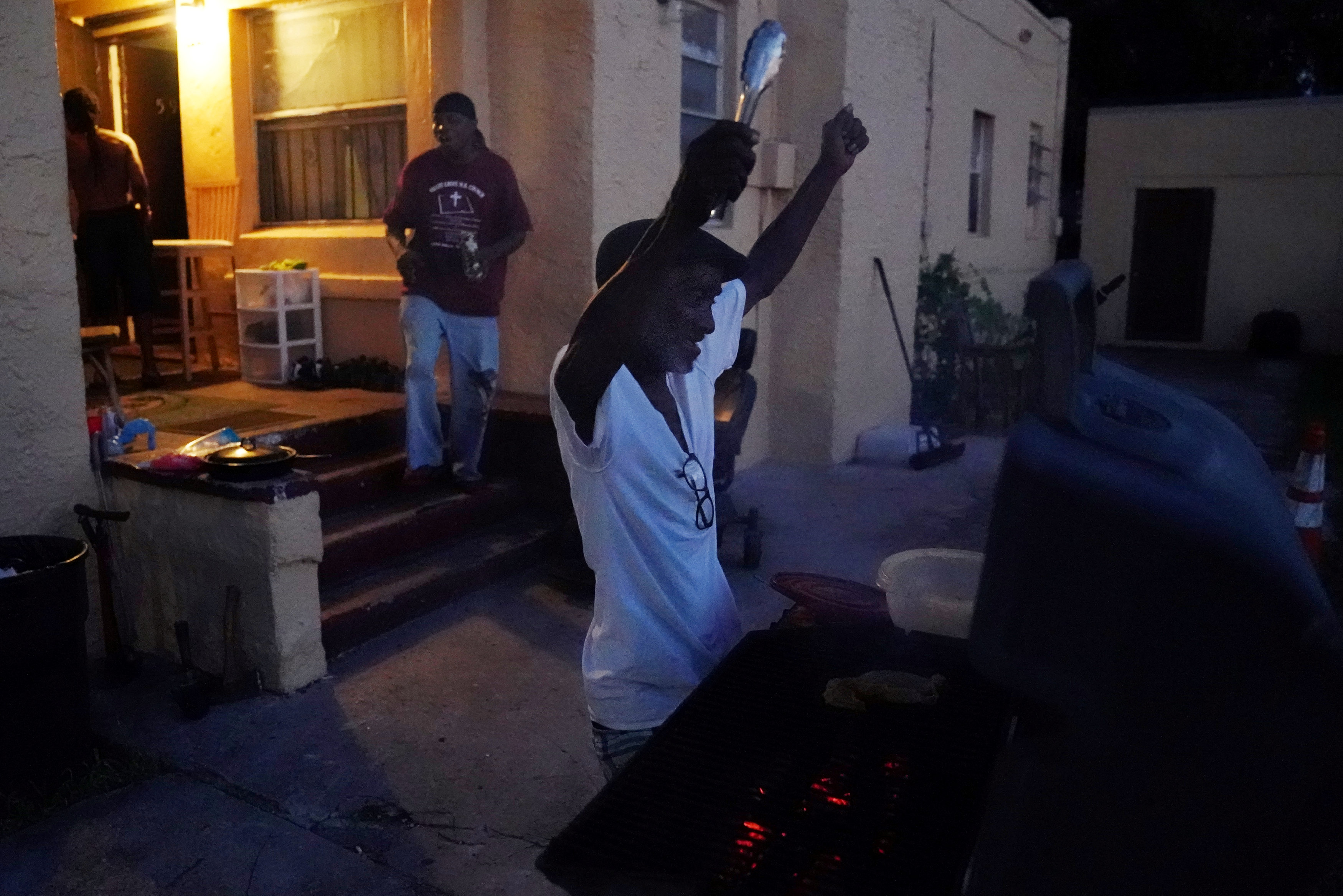 A man cheers just as power is restored to his house after Hurricane Irma struck the Little Haiti neighborhood of Miami, Florida, U.S., September 12, 2017. REUTERS/Carlo Allegri

The state’s largest city, Jacksonville, in its northeastern corner, was still recovering from heavy flooding on Wednesday.

While damage across Florida was severe, it paled in comparison with devastation wrought by Irma in parts of the Caribbean, which accounted for the bulk of the hurricane’s fatalities.

It destroyed about one-third of the buildings on the Dutch-governed portion of the eastern Caribbean island of St. Martin, the Dutch Red Cross said on Tuesday.

Irma was a post-tropical cyclone late on Tuesday as it drifted north as it brought rain to the Mississippi Valley, the National Hurricane Center said.

It hit the United States soon after Hurricane Harvey, which plowed into Houston late last month, killing about 60 and causing some $180 billion in damage, mostly from flooding. 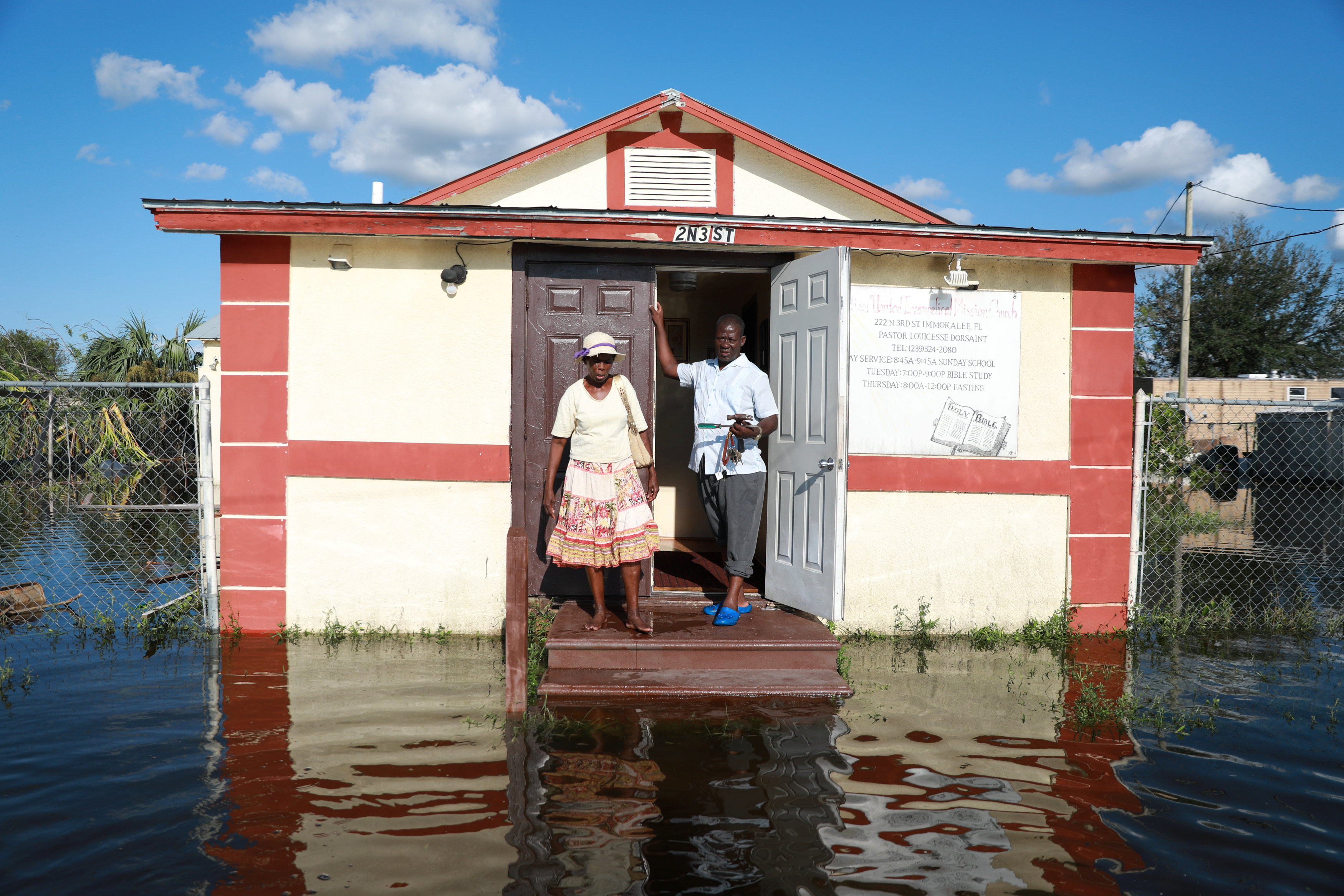 Pastor Louicesse Dorsaint stands with his wife Maria Dorsaint in front of their church, Haitian United Evangelical Mission, which was damaged by flooding from Hurricane Irma in Immokalee, Florida, U.S. September 12, 2017 REUTERS/Stephen Yang