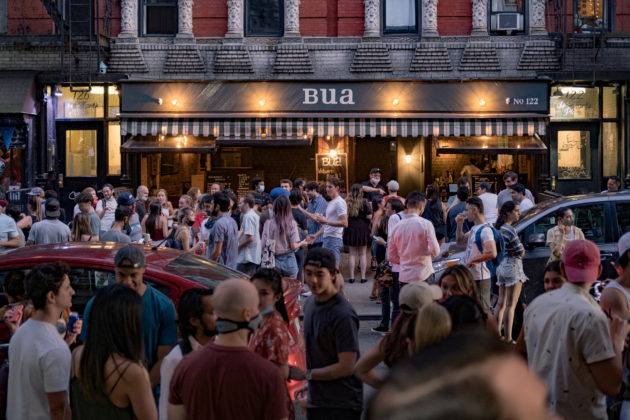 Scenes of merrymakers gathering outside bars prompted the governor of New York, the state hardest hit along with New Jersey by the coronavirus pandemic, to urge local officials and businesses on Monday to strictly enforce reopening guidelines.

“To the local governments I say, ‘Do your job,'” Governor Andrew Cuomo told reporters. Over the weekend he criticized New York City street crowds outside bars and asked people to adhere to six feet (two meters) of distance from others.

Both Cuomo and neighboring New Jersey Governor Phil Murphy said they were keeping open the option of reimposing restrictions if officials fail to stop large public gatherings that risk leading to a second wave of infections.

In California, Governor Gavin Newsom has left it up to individual counties on when to reopen once they meet state guidelines. He reminded county officials of the risks of not restarting economies, as well as reopening them.

Newsom told a news briefing on Monday people could not be “locked away for months and months and months,” especially those among the 5.5 million Americans who have lost their jobs since mid-March. He said some had also lost health coverage and were among the many people suffering severe mental and physical health problems during the pandemic.

In enforcing coronavirus restrictions, he said the state and counties could not “see lives and livelihoods completely destroyed without considering the health impact of those decisions as well.”

“As we mix, as we reopen, inevitably we’re going to see an increase in the total number of cases; it’s our capacity to address that that is so foundational,” said Newsom.

California is one of four states that is projected to see the biggest spike in deaths in the months ahead, according to the Institute for Health Metrics and Evaluation (IHME) at the University of Washington.

Its new forecast on Monday forecast over 200,000 deaths due to COVID-19 in the United States through the beginning of October, mainly due to reopening measures underway.

The IHME, whose estimates are cited by many health experts, projected Florida will see its deaths nearly triple to 18,675 deaths from 6,559 on June 10, while California can expect to see deaths increase by 72 percent to 15,155 from 8,812, it said.

Georgia and Arizona also have sharp increases in deaths forecast by the institute.

New York and New Jersey between them account for more than a third of the nearly 116,000 U.S. deaths, but deaths and hospitalizations have been on the decline of late. Both have followed strict health guidelines for reopening businesses when all measures of infection drop – new cases, deaths, hospitalizations and positive rates among those getting tested.

Scott Gottlieb, the former Food and Drug Administration director who has advised the White House on the coronavirus, said on Monday that flare-ups needed to be addressed with aggressive contact tracing and targeted responses.