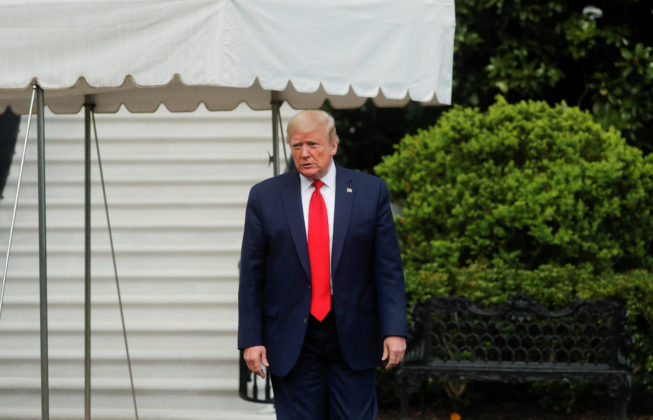 FILE PHOTO: U.S. President Donald Trump heads to the Marine One helicopter to depart for a weekend at Camp David from the South Lawn of the White House in Washington, U.S., May 1, 2020. REUTERS/Carlos Barria

Trump, asked whether those who serve him food would now cover their faces, told Fox News in an interview that such White House staff would now be covering their faces.

“They’ve already started,” he said on the network’s “Fox and Friends” morning program.

The White House on Thursday said Trump and Vice President Mike Pence tested negative for the virus and were feeling well after the staffer – a U.S. military service member who works at the White House as a valet – came down with the virus. It also said the two leaders would now be tested daily, versus weekly.

Trump has said he would not wear a mask and has not publicly worn a mask to any of his events so far amid the COVID-19 pandemic, but told reporters this week that he tried some on behind the scenes during his visit to a Honeywell face mask factory in Arizona.

He is scheduled to attend a public event at the World War Two memorial later on Friday before meeting with Republican members of Congress at the White House, according to the White House.

The Republican president also told Fox News that he has not yet been tested for antibodies to the novel coronavirus but probably would be soon. Such a test could confirm previous exposure to the virus.