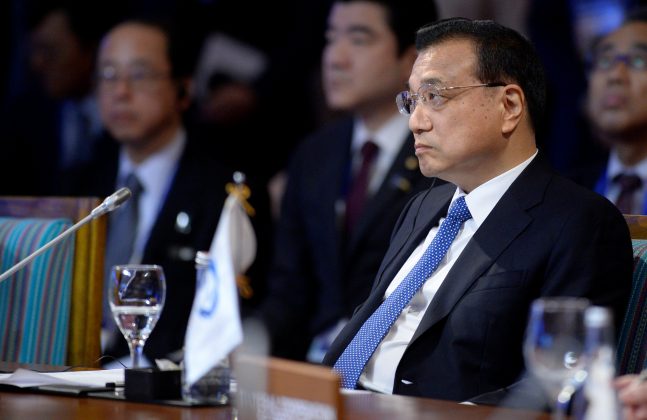 MANILA (Reuters) – China’s agreement to begin discussions with the Association of Southeast Asian Nations (ASEAN) on the fine print of a code of conduct framework for the disputed South China Sea will be a “stabilizer” for the region, Chinese Premier Li Keqiang said.

“China’s greatest hope is for peace and stability in the South China Sea,” Li told ASEAN leaders in Manila.

Southeast Asia and China foreign ministers in August adopted a negotiating framework for a code of conduct in the South China Sea, a move they hailed as progress but seen by critics as a tactic to buy China time to consolidate its maritime power.

Li, addressing leaders of ASEAN grouping during a summit in the Philippines capital Manila on Monday, said there was a consensus on moving forward and to try to peacefully resolve the thorny issue.

“We hope the talks on the code of conduct will bolster mutual understanding and trust. We will strive under the agreement, to reach a consensus on achieving early implementation of the code of conduct,” Li said, according to a transcript of his speech released by China’s Foreign Ministry on Tuesday.

Li didn’t give a timeframe, but said he hoped this move would be a “stabilizer” for the region.

Critics say the agreement to talk on the details of the code of conduct is only an incremental move, with a final agreement not likely anytime soon. Despite a period of relative stability in the South China Sea, some countries at the summit said this shouldn’t be taken for granted.

The framework seeks to advance a 2002 Declaration of Conduct (DOC) of Parties in the South China Sea, which has mostly been ignored by claimant states, particularly China, which has built seven manmade islands in disputed waters, three of which are equipped with runways, surface-to-air missiles and radars.

All parties say the framework is only an outline for how the code will be established but critics say the failure to outline as an initial objective the need to make the code legally binding and enforceable, or have a dispute resolution mechanism, raises doubts about how effective the pact will be.

Signing China up to a legally binding and enforceable code for the strategic waterway has long been a goal for claimant members of ASEAN, some of which have sparred for years over what they see as China’s disregard for their sovereign rights and its blocking of fishermen and energy exploration efforts.

Malaysia, Taiwan, Brunei, Vietnam and the Philippines all claim some or all of the South China Sea and its myriad shoals, reefs and islands.

(Reporting by James Pomfret in Manila; Editing by Michael Perry)