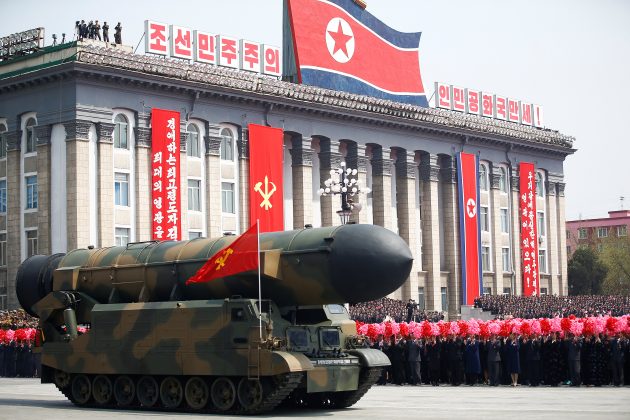 By Ju-min Park and Ben Blanchard

SEOUL/BEIJING (Reuters) – South Korea said on Friday it was on heightened alert ahead of another important anniversary in North Korea, with a large concentration of military hardware amassed on both sides of the border amid concerns about a new nuclear test by Pyongyang.

U.S. officials said there was a higher-than-usual level of activity by Chinese bombers, signaling a possible heightened state of readiness by Beijing, reclusive North Korea’s sole major ally, although the officials played down concern and left open a range of possible reasons.

In Russia, a Kremlin spokesman declined to comment on media reports that Russia was moving military hardware and troops toward the border with North Korea, the RIA news agency quoted him as saying.

U.S. and South Korean officials have been saying for weeks that the North could soon stage another nuclear test in violation of United Nations sanctions, something both the United States and China have warned against.

Top envoys from the United States, South Korea and Japan on North Korea are due to meet on Tuesday, South Korea’s foreign ministry said, to “discuss plans to rein in North Korea’s additional high-strength provocations, to maximize pressure on the North, and to ensure China’s constructive role in resolving the North Korea nuclear issue”.

South Korea and the United States have also been conducting annual joint military exercises, which the North routinely criticizes as a prelude to invasion.

“It is a situation where a lot of exercise equipment is amassed in North Korea and also a lot of strategic assets are situated on the Korean peninsula because of the South Korea-U.S. military drills,” Lee told a briefing.

“We are closely watching the situation and will not be letting our guards down,” Lee said.

U.S. Defense Secretary Jim Mattis said on Friday North Korea’s rhetoric was provocative but he had learned not to trust it.

Trump told a news conference “some very unusual moves have been made over the last two or three hours”, and that he was confident Chinese President Xi Jinping would “try very hard” to pressure North Korea over its nuclear and missile programs.

Trump gave no indication of what the moves might be. None of the U.S. officials who told Reuters about the heightened level of activity by Chinese bombers suggested alarm or signaled that they knew the precise reason for such activity.

Chinese Foreign Ministry spokesman Lu Kang referred questions about the air force to the Defence Ministry, which has yet to publicly comment.

Asked about Trump’s comment about Xi trying hard, Lu said Xi and Trump had had a full and deep discussion about North Korea when they met this month.

An official Chinese newspaper said there was optimism about persuading the North to end its pursuit of a nuclear program without the use of force, “now that even the once tough-talking Donald Trump is onboard for a peaceful solution”.

“Beijing has demonstrated due enthusiasm for Washington’s newfound interest in a diplomatic solution and willingness to work more closely with it,” the state-run China Daily said in an editorial.

In Russia’s Ear East, some media have cited residents as saying they have seen military hardware being moved toward North Korea but Kremlin spokesman Dmitry Peskov said deployment of Russian troops inside Russia were not a public matter.

Tensions have risen sharply in recent months after North Korea conducted two nuclear weapons tests last year and carried out a steady stream of ballistic missile tests. Trump has vowed to prevent North Korea from being able to hit the United States with a nuclear missile.

North Korea has said it would test missiles when it sees fit and a South Korean analyst said he believed they would do so.

“Without crossing the red line such as a nuclear test or a test launch of an intercontinental ballistic missile, until the April 25 anniversary of the Korean People’s Army, North Korea is expected to continue to launch mid-range missiles,” said Cheong Seong-chang, a senior research fellow at Sejong Institute outside Seoul.

The joint U.S.-South Korea military exercises are due to finish at the end of April.

A U.S. aircraft carrier strike group, led by the USS Carl Vinson, is heading toward the Korean Peninsula, Trump’s administration has said.

North Korea test-fired what the United States believed was a mid-range missile on Sunday. It blew up almost immediately.

The failed launch came a day after the 105th anniversary of the birth of North Korea’s founding father, Kim Il Sung, the current leader’s grandfather.

There is concern the North will use the next big day on its calendar, April 25, to show off its strength.

“Although North Korea attempted a missile launch but failed on April 16, considering the April 25 anniversary of the Korean People’s Army, there are concerns that it can make another provocation again at any time,” South Korea’s acting president Hwang Kyo-ahn told top officials on Thursday.

He called on the military to maintain readiness.