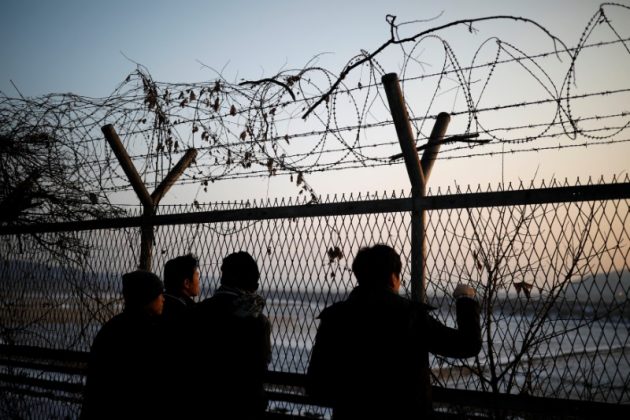 People look toward the north through a barbed-wire fence near the militarized zone separating the two Koreas, in Paju, South Korea, December 21, 2017. REUTERS/Kim Hong-Ji

SEOUL (Reuters) – South Korea on Tuesday offered talks with North Korea amid a standoff over its weapons programs, a day after North Korean leader Kim Jong Un said he was open to negotiations but that his country would push ahead with “mass producing” nuclear warheads.

The offer for high-level talks next Tuesday had been discussed with the United States, the South’s unification minister said, while a decision on whether to push back a massive joint military drill between South Korea and the United States until after the Winter Olympics was pending.

Tension has been rising over North Korea’s nuclear and missile programs, which it pursues in defiance of years of U.N. Security Council resolutions, with bellicose rhetoric coming from both Pyongyang and the White House. The North sees the regular war drills between the South and the United States as preparations for war.

“We look forward to candidly discussing interests from both sides face-to-face with North Korea along with the North’s participation in the Pyeongchang Winter Olympics,” Unification Minister Cho Myong-gyon told reporters.

“I repeat, the government is open to talking with North Korea, regardless of time, location and form.”

Cho said he expects the dialogue at the border village of Panmunjom, if it happens, to be focused on North Korea’s participation at the Olympics in February, but other issues would likely arise, including the decentralization of North Korea.

Should the talks be held on Jan. 9, it would be the first such dialogue since a vice-ministerial meeting in December 2015.

The offer landed after a New Year’s Day speech by Kim who said he was “open to dialogue” with Seoul, and for North Korean athletes to possibly take part in the Winter Games, but he persistently declared North Korea a nuclear power.

After welcoming Kim’s address, South Korean President Moon Jae-in had asked his government earlier in the day to move as quickly as possible to bring North Korea to the Olympics.

Chinese Foreign Ministry spokesman Geng Shuang said the recent positive comments from both sides about improving relations, and Kim’s remarks about participating in the upcoming Olympics, were a “good thing”.

“China welcomes and supports North Korea and South Korea taking earnest efforts to treat this as an opportunity to improve mutual relations, promote the alleviation of the situation on the Korean peninsula and realize denuclearization on the peninsula.”

“I regret the government had even lost the flexibility to spend one day or two taking a deep breath and meticulously analyzing Kim Jong Un’s ulterior motive before hastily issuing a welcoming statement,” he said.

“The government will have to strive more to come up with a countermeasure not to get caught in a trap set by Kim Jong Un.”

Choi Moon-soon, governor of Gangwon Province where the Olympics are to be held next month, has proposed South Korea send cruise ships to bring North Korean athletes and officials to Pyeongchang, according to South Korean media.

The governor did not immediately respond to a request by Reuters for comment.

This week’s exchanges follow a year dominated by fiery threats form Kim and U.S. President Donald Trump who vowed to destroy North Korea if threatened, even as U.S. diplomats pushed for a diplomatic solution.

North Korea, which regularly threatens to destroy the United States, South Korea and Japan, tested its most powerful intercontinental ballistic missile in November, which it said was capable of delivering a warhead to anywhere in the United States.

Kim said in a New Year’s Day speech on Monday he would consider sending a delegation to the Olympics.

“North Korea’s participation in the Winter Games will be a good opportunity to showcase the national pride and we wish the Games will be a success. Officials from the two Koreas may urgently meet to discuss the possibility,” Kim said.

North Korea would focus in 2018 on “mass-producing nuclear warheads and ballistic missiles for operational deployment”.

“The whole territory of the U.S. is within the range of our nuclear strike and a nuclear button is always on the desk of my office and this is just a reality, not a threat,” he said, while emphasizing that the weapons would only be used if North Korea was threatened.

The U.S. State Department did not respond to a requests for comment on Kim’s address, but analysts said it was an attempt to weaken the U.S.-South Korean alliance.

Trump said on Twitter last week that China has been “caught” allowing oil into North Korea and said such moves would prevent “a friendly solution” to the crisis.

(Reporting by Christine Kim; Additional reporting by Jane Chung and Hyonhee Shin in Seoul, and Michael Martina in Beijing; Editing by Nick Macfie)