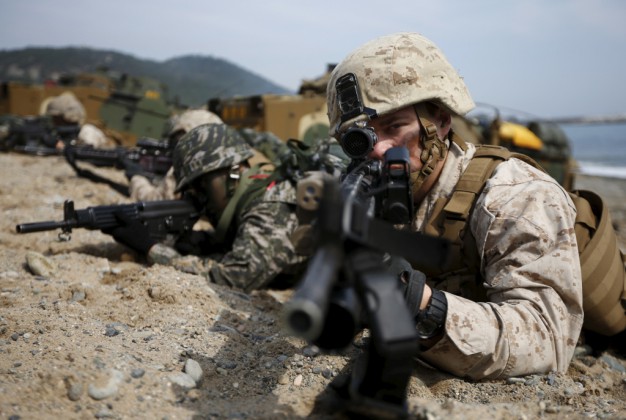 SEOUL (Reuters) – South Korean and U.S. troops began large-scale military exercises on Monday in an annual test of their defenses against North Korea, which called the drills “nuclear war moves” and threatened to respond with an all-out offensive.

South Korea said the exercises would be the largest ever following North Korea’s fourth nuclear test in January and a long-range rocket launch last month that triggered a U.N. Security Council resolution and tough new sanctions.

Isolated North Korea has rejected criticism of is nuclear and rocket programs, even from old ally China, and last week leader Kim Jong Un ordered his country to be ready to use nuclear weapons in the face of what he sees as growing threats from enemies.

The joint U.S. and South Korean military command said it had notified North Korea of “the non-provocative nature of this training” involving about 17,000 American troops and more than 300,000 South Koreans.

South Korea’s Defence Ministry said it had seen no sign of any unusual military activity by the North.

North Korea’s National Defence Commission said the North Korean army and people would “realize the greatest desire of the Korean nation through a sacred war of justice for reunification”, in response to any attack by U.S. and South Korean forces.

“The army and people of the DPRK will launch an all-out offensive to decisively counter the U.S. and its followers’ hysterical nuclear war moves,” the North Korean commission said in a statement carried by the North’s KCNA news agency.

The North, the Democratic People’s Republic of Korea (DPRK), as it is officially known, routinely issues threats of military action in response to the annual exercises that it sees as preparation for war against it.

The threat on Monday was in line with the usual rhetoric it uses to denounce the drills.

Chinese Foreign Ministry spokesman Hong Lei noted that North Korea had already said it opposed the drills, adding that Beijing was “deeply concerned” about the exercises.

“China is linked to the Korean Peninsula. In terms of the peninsula’s security, China is deeply concerned and firmly opposed to any trouble-making behavior on the peninsula’s doorstep. We urge all sides to keep calm, exercise restraint and not escalate tensions,” he told a daily news briefing.

South Korea’s spy agency said it would hold an emergency cyber-security meeting on Tuesday to check readiness against any threat of cyber attack from the North, after detecting evidence of attempts by the North to hack into South Korean mobile phones.

South Korea has been on heightened cyber alert since the nuclear test and the rocket launch.