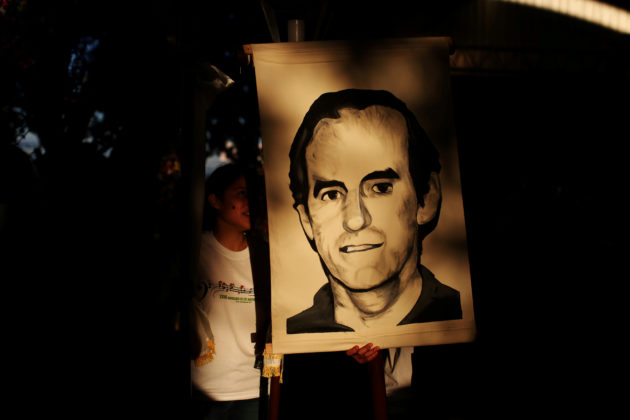 FILE PHOTO: Students hold a portrait of Jesuit priest Ignacio Ellacuria prior to a procession commemorating the 28th anniversary of the murder of several Jesuit priests and two employees, who were killed by government military forces during the Salvadoran civil war, at the Central American University (UCA) in San Salvador, El Salvador, November 11, 2017. REUTERS/Jose Cabezas

MADRID (Reuters) – Spain’s High Court sentenced a former army colonel from El Salvador on Friday to 133 years in prison for the murder of five Spanish Jesuit priests in 1989 during the Central American country’s civil war.

Inocente Orlando Montano Morales, 77, was also found responsible by the judges for the murders of the priests’ housekeeper and her 15-year-old daughter, as well as a local Jesuit priest. The court could not convict him of these crimes because his extradition to Spain did not cover these cases.

The massacre was one of the most notorious acts of a decade-long civil war during which 75,000 people were killed and 8,000 went missing.

The judges said they found Montano Morales guilty of five counts of “murder of terrorist nature,” adding that the killings were committed by the state apparatus, making them what “is commonly known as terrorism implemented by the state”.

They added that the total maximum prison term is 30 years.

Montano Morales has been in custody since 2011 when he was arrested in the United States on immigration fraud charges. He was deported to Spain in 2017.

The Spanish government has indicted 20 former Salvadoran army officers for the killings of the priests, their housekeeper and her daughter. One of the priests, Father Ignacio Ellacuria, was a prominent critic of the U.S.-backed right-wing government.

The massacre occurred on Nov. 16, 1989, when a group of soldiers from the U.S.-trained Atlacatl Battalion entered the campus of the Central American University where Ellacuria was rector.

Ellacuria had advocated a negotiated settlement to the military-led junta government’s war against the left-wing Farabundo Marti National Liberation Front (FMLN). International revulsion at the murders of the priests helped to push through such a solution, with the war ending in 1992.