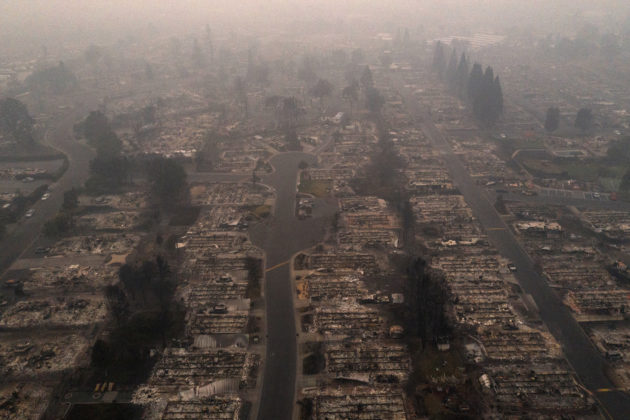 A haze from wildfire smoke lingers over the gutted Medford Estates neighborhood in the aftermath of the Almeda fire in Medford, Oregon, U.S., September 10, 2020. Picture taken with a drone. REUTERS/Adrees Latif

By Carlos Barria and Adrees Latif

(Reuters) – Around half a million people in Oregon evacuated as dozens of extreme, wind-driven wildfires scorched U.S. West Coast states on Friday, destroying hundreds of homes and killing at least 16 people, state and local authorities said.

Since Monday 11 people have died from fires in California, while four were killed in Oregon and a 1-year-old boy died in Washington state, police reported.

In Oregon alone the number of people under evacuation orders climbed to some 500,000 – about an eighth of the state’s total population – as Portland suburbs came under threat from the state’s biggest blaze, the state Office of Emergency Management said.

Thousands more were displaced north and south in the neighboring states of Washington and California.

Oregon bore the brunt of nearly 100 major wildfires raging across Western states, with around 3,000 firefighters battling nearly three dozen blazes and officials saying about twice as many people were needed.

Police have opened a criminal arson investigation into at least one Oregon blaze, the Almeda Fire, which started in Ashland near the border with California and incinerated several hundred homes in adjacent communities along Bear Creek, Ashland Police Chief Tighe O’Meara said.

The Oregon blazes tore through multiple communities in the Cascade mountain range as well as areas of coastal rainforest normally spared from wildfires. In eastern Washington state a fire destroyed most of the tiny farming town of Malden.

To the south, a string of small communities along Interstate 5 near Medford were reduced to ashes after embers from a wildfire blew for miles.

Firefighters said unusually hot, dry winds out of the east supercharged blazes, spreading flames from community to community, and then from house to house.

“This will not be a onetime event,” Brown told a Thursday news conference. “We are feeling the acute impacts of climate change”

Climate scientists say global warming has contributed to greater extremes in wet and dry seasons, causing vegetation to flourish then dry out in the U.S. West, leaving more abundant, volatile fuel for fires.

In California, the United States’ most populous state, wildfires have burned over 3.1 million acres (1.25 million hectares) so far this year, marking a record for any year, with six of the top 20 largest wildfires in state history occurring in 2020.

About a third of evacuees were displaced in Butte County alone, north of Sacramento, where the North Complex wildfire has scorched more than 247,000 acres (99,960 hectares) and destroyed over 2,000 homes and structures.

The remains of 10 victims have been found in separate locations of that fire zone, according to a spokesman for the Butte County Sheriff’s Office.