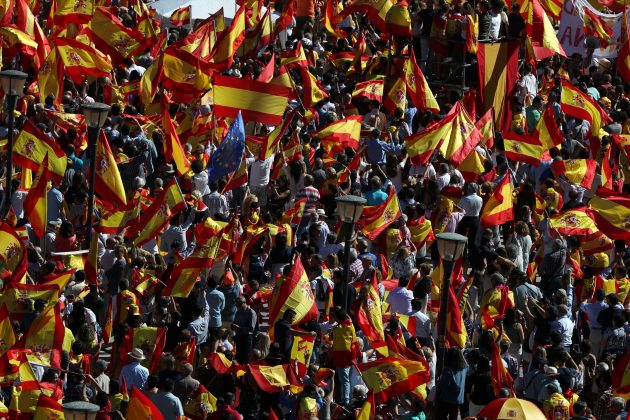 By Raquel Castillo and Sam Edwards

MADRID/BARCELONA (Reuters) – Tens of thousands of people gathered in Madrid and Barcelona on Saturday as Catalonia prepared to declare independence, many dressed in white and calling for talks to defuse Spain’s worst political crisis for decades.

The wealthy northeastern region of Catalonia, with its own language and culture, has long claimed to be distinct from the rest of the country and on Sunday held a referendum on leaving Spain, a vote the constitutional court had banned.

The Catalan authorities say that a majority of those who voted supported a split from Spain, something Madrid says is illegal under the country’s 1978 constitution.

The political stand-off has divided the country, pushed banks and companies to move their headquarters outside Catalonia and shaken market confidence in the Spanish economy, prompting calls from the European Commission for Catalan and Spanish leaders to find a political solution.

In protests called across 50 Spanish cities, thousands gathered dressed in white and carrying banners calling for peace and dialogue between leaders.

Meanwhile in Barcelona, protesters chanted “let’s talk” in Catalan, while many carried signs criticizing political leaders for not finding a diplomatic solution to the impasse.

“This is producing a social rupture in Catalonia and this has to be resolved through dialogue, never via unilateralism,” Jose Manuel Garcia, 61, an economist who attended the protest dressed in white said.

“I’m very worried. This will end badly and everyone will lose (without dialogue).”

While Catalan leader Carles Puigdemont has said he is open to mediation, Prime Minister Mariano Rajoy insists he gives up the independence campaign, which grew in strength during a near-six year economic crisis, before he will discuss the matter.

Meanwhile, in Madrid, parallel to the “Let’s talk” march, thousands gathered beneath the enormous Spanish flag in Colon Plaza waving their own flags, singing and chanting “Viva España” and “Viva Cataonia”.

“I’ve come because I feel very Spanish and makes me very sad what’s happened,” Rosa Borras, 47, an unemployed secretary who had joined a noisy gathering in central Madrid, said.

Borras, wearing a “Catalonia, we love you” sticker and surrounded by thousands waving Spanish flags, added: “I wanted to be here for unity, because I also feel very Catalan. My family lives in Catalonia.”

Rajoy’s government mobilized thousands of national police to stop Sunday’s vote, leading to clashes with would-be voters as they tried to close polling stations in schools and remove ballot boxes.

The police violence drew widespread condemnation and forced the government to issue an apology on Friday, although tensions continued to rise after reports that plans for a unilateral declaration of independence will be handed to the Catalan parliament on Tuesday.

Concern is growing in EU capitals about the impact of the crisis on the Spanish economy, the fourth largest in the euro zone, and on possible spillovers to other economies.

European finance ministers, gathering in Brussels on Monday and Tuesday for a regular meeting, could discuss the issue, although it is not formally on the agenda, EU officials said.

The support given in public statements by EU leaders to Rajoy is combined with concern expressed in private about how the Spanish government’s use of police to prevent Catalans from voting last week in an independence referendum could backfire.

Some EU states are worried that talk of Catalan independence could fuel secessionist feelings in other parts of Europe.