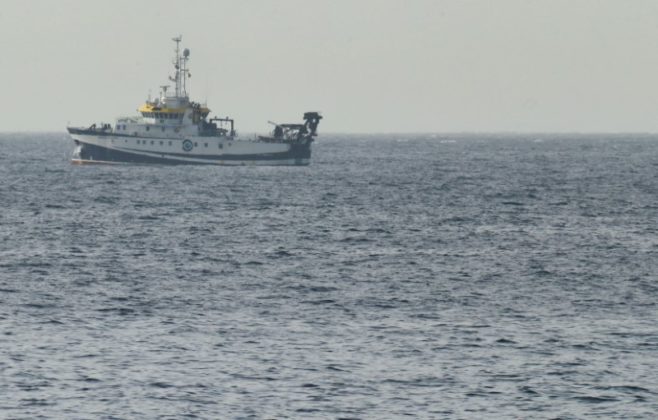 The Spanish vessel Angeles Alvarino carries out a search operation to try to locate a second missing girl and her father, near the coast of the Spanish island of Tenerife, Spain, June 11, 2021. REUTERS//Borja Suarez

By Borja Suarez and Emma Pinedo

TENERIFE, Spain (Reuters) -Spanish rescuers were searching waters off the coast of Tenerife for a one-year-old girl on Friday after a body which was reportedly confirmed to be her six-year-old sister was found weighed down in the ocean to an outpouring of rage and grief on the island.

Their father, Tomas G., is the main suspect in the disappearance of Olivia, 6, and Anna, 1, after failing to return them to their mother as agreed at the end of April. He is also missing.

Fingerprint checks have confirmed that the body found weighed down in the sea was that of Olivia, according to judicial sources cited by El Pais newspaper.

The family lived on Tenerife, where officials and a few local residents observed a minute of silence in memory of the sisters in front of the main city hall and outside other official buildings on the Canary Islands.

“All Spain is shocked, all our support for the families whose pain is absolutely unbearable and unimaginable, all our rejection of sexist violence, the vicarious violence that some still deny in our country,” Spanish Prime Minister Pedro Sanchez said on Friday during a visit to Costa Rica.

The body of the 6-year-old, which authorities said was likely that of Olivia, was found on Thursday afternoon at a depth of 1,000 meters inside a sports bag tied to an anchor, near where her father’s boat was drifting.

Another empty sports bag was also found next to them, a court statement said.

Authorities were about to call off the maritime search earlier this week when they found personal belongings of the father at sea.

On the streets of Tenerife people mourned the girls.

“Every mother and grandmother feels the greatest sorrow, mainly for her (the girls’ mother)… It’s as if they were our own daughters or granddaughters,” said local resident Maria Victoria.

Spain’s left-wing government has put women’s rights at the top of its political agenda and sought to combat prevailing macho attitudes.

In Seville, a former boyfriend of Rocio Caiz, 17, was arrested after he allegedly confessed to killing her and cutting up her body.