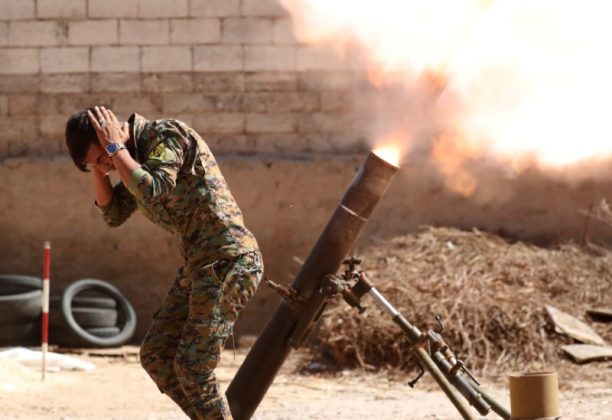 A Kurdish fighter from the People's Protection Units (YPG) fires a 120 mm mortar round in Raqqa, Syria, June 15, 2017. REUTERS/Goran Tomasevic

RAQQA, Syria (Reuters) – Kurdish fighter Habun Kamishli proudly recalled the cat and mouse game she played with an Islamic State suicide bomber in the Syrian town of Raqqa, where the militant group is likely to make its last stand.

“I was standing on a rooftop yesterday as our forces advanced. I noticed he was trying to sneak from one street to another to get into the building and kill us,” she said.

“Then I took a picture of his body with my phone. We are avenging the deaths of our fellow Kurds.”

The U.S.-backed Syrian Democratic Forces, made up predominantly of Kurdish fighters, has seized territory to the north, east and west of Raqqa. The city of about 200,000 has been the base of operations for Islamic State, which has claimed responsibility for multiple attacks on civilians across the globe.

The assault on Raqqa is likely to be a defining moment in the U.S.-led war on Islamic State in Iraq and Syria.

Along with the Iraqi army’s campaign to drive out Islamic State in Mosul, the other center of its self-proclaimed caliphate, it threatens to deal a major blow to the militants.

Spirits were high among Kurds on Thursday, as they identified Islamic State targets on an iPad and fired mortar rounds toward them.

Nearby, a Kurdish fighter listened to communications on a radio. Coalition aircraft had spotted militants in a car and were about to attack.

The mood along a Raqqa street was a far cry from the fear that took hold when the extremist Sunni militants group declared a caliphate in Iraq and Syria and moved towards building a self-sufficient state.

Kurdish YPG militia flags hang on the walls of buildings beside names of fighters and women sang patriotic songs.

Shops taken over by the militants were abandoned, with just a few empty chocolate boxes left. Large billboards with the group’s original name Islamic State in Iraq and Syria felt like part of a bygone era.

Kurdish women commanders seemed confident of victory in the next few months.

“We have them surrounded on three sides and many can’t escape anymore,” said Samaa Sarya. “Some manage to escape on wooden boats along the river at night.”

The number of car bombs, a favorite Islamic State weapon, has fallen from about 20 to 7 a day. Coalition air strikes are exerting heavy pressure on Islamic State.

Some Kurdish fighters estimate there could be as many as 3,000 militants left in Raqqa, where buildings are pockmarked from fighting.

Gunfire could be heard as Kurdish militiaman Orkash Saldan pointed to a wall about 500 meters away.

“Daesh are just beyond that point,” he said, walking past a rocket Islamic State fired two days ago.

In a nearby building, where Islamic State had left behind mattresses and clothes, he pointed to a small teapot.

“You never know they could have put a bomb in that teapot or that television,” he said.