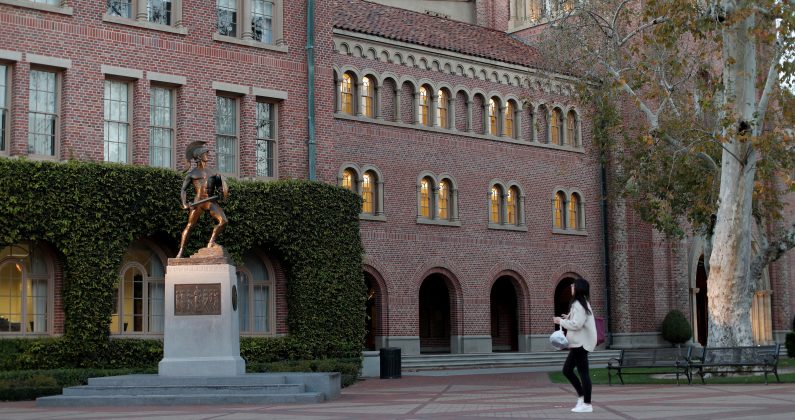 A person walks by the Trojan Shrine at University of Southern California in Los Angeles, California, U.S., March 13, 2019. REUTERS/Mario Anzuoni

(Reuters) – The U.S. college admissions scandal that erupted this week has spawned lawsuits accusing rich, well-connected parents and prestigious schools of conspiring to admit those parents’ children at the expense of the less affluent.

Lawsuits began emerging on Wednesday, a day after federal prosecutors said a California company made about $25 million from parents seeking spots for their children in top schools including Georgetown University, Stanford University, the University of Southern California and Yale University.

In one civil lawsuit, Stanford students Erica Olsen and Kalea Woods said they were denied a fair opportunity to win admission to Yale and USC because of alleged racketeering, and said their degrees from Stanford will be devalued.

Singer and eight schools, including Stanford, were named as defendants in the lawsuit, which seeks unspecified damages.

Another lawsuit by Joshua Toy and his mother said he was denied college admission despite a 4.2 grade point average, and seeks $500 billion of damages from 45 defendants for defrauding and inflicting emotional distress on everyone whose “rights to a fair chance” to enter college was stolen.

“These class-action cases are opportunistic creatures of lawyers trying to obtain a windfall,” Donald Heller, a lawyer for Singer, said in a phone interview.

Lawyers for the plaintiffs did not immediately respond to requests for comment.

Both lawsuits were filed in California. More lawsuits are likely.

The Stanford case is notable because that school is among the country’s most prestigious and selective, admitting just 4.3 percent of its applicants last year.

But Olsen and Woods said their degrees are “now not worth as much” because prospective employers might question whether they were admitted on merit, or had parents whose bribes got them in.

A Stanford spokesman said the university is reviewing the lawsuit.