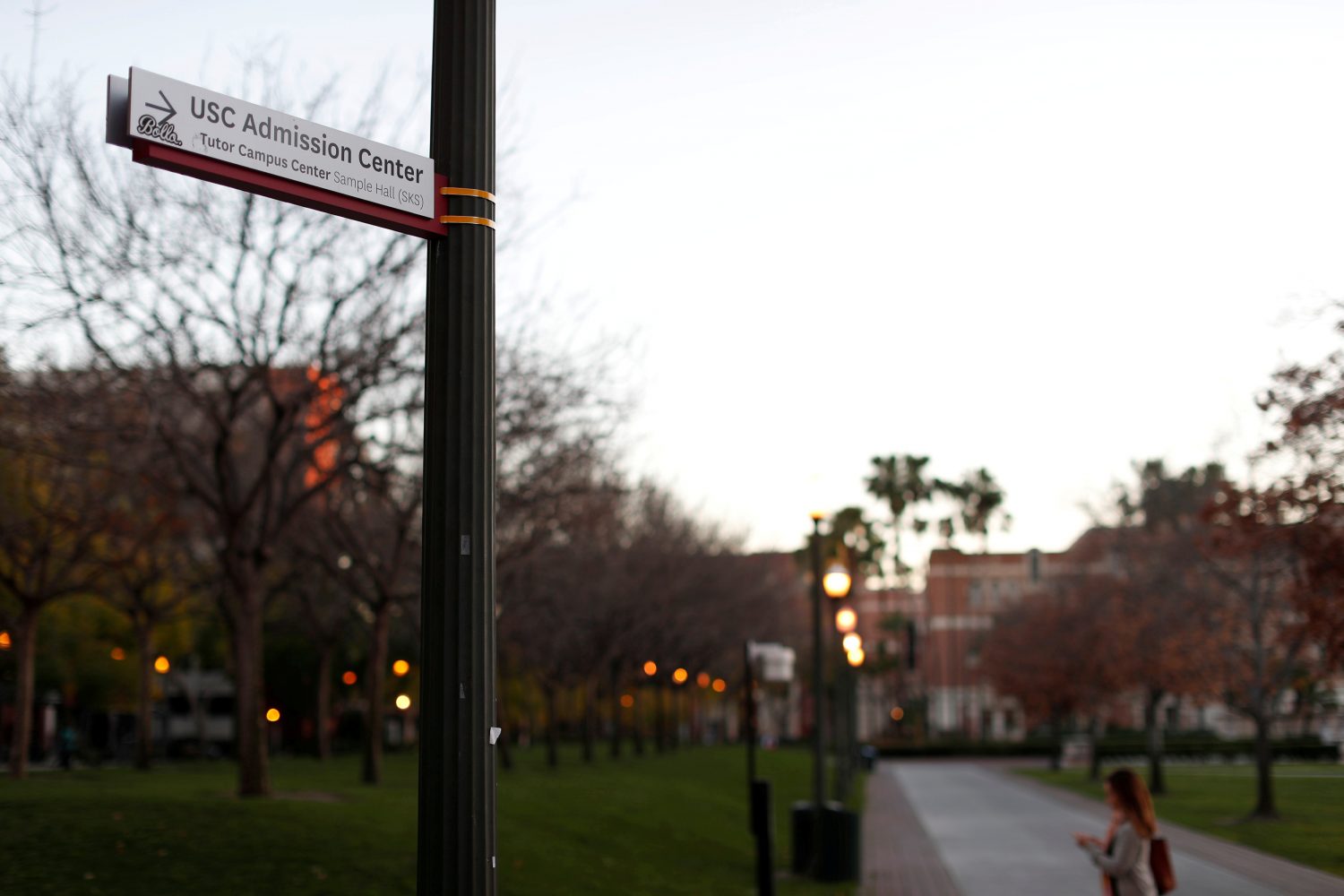 (Reuters) – The University of Southern California said it may expel students linked to the largest college-admissions cheating scandal in U.S. history after it completes a review of their records.

The school said on Monday night that it has already “placed holds on the accounts of students who may be associated with the alleged admissions scheme,” preventing them from registering for classes or acquiring transcripts.

“Following the review, we will take the proper action related to their status, up to revoking admission or expulsion,” the college said in a tweet on Monday night.

The move would affect the daughters of “Full House” actress Lori Loughlin and fashion designer Mossimo Giannulli. The parents were among 50 people charged last week with participation in what federal prosecutors called a $25 million bribery and fraud scam.

The mastermind of the scheme last week pleaded guilty to racketeering charges for bribing coaches, cheating on standardized tests and fabricating athletic profiles to help children of wealthy families gain admission to top universities including Yale, Stanford and Georgetown.

A spokesman for Georgetown on Tuesday said the school would not comment on disciplinary action against individual students linked to the scandal but added that it is “reviewing the details of the indictment, examining our records, and will be taking appropriate action.”

Yale, UCLA, and the University of Texas said last week that any students found to have misrepresented any part of their applications may have their admission rescinded. Stanford said it is “working to better understand the circumstances around” one of its students linked to the scheme.

Wake Forest’s president said in a statement last week, “We have no reason to believe the student was aware of the alleged financial transaction.”

Prosecutors said some students involved in the scandal were not aware that their parents had made the alleged arrangements, although in other cases they knowingly took part. None of the children were charged.

The Hallmark cable channel last week cut ties with Loughlin for her alleged role in the fraud. 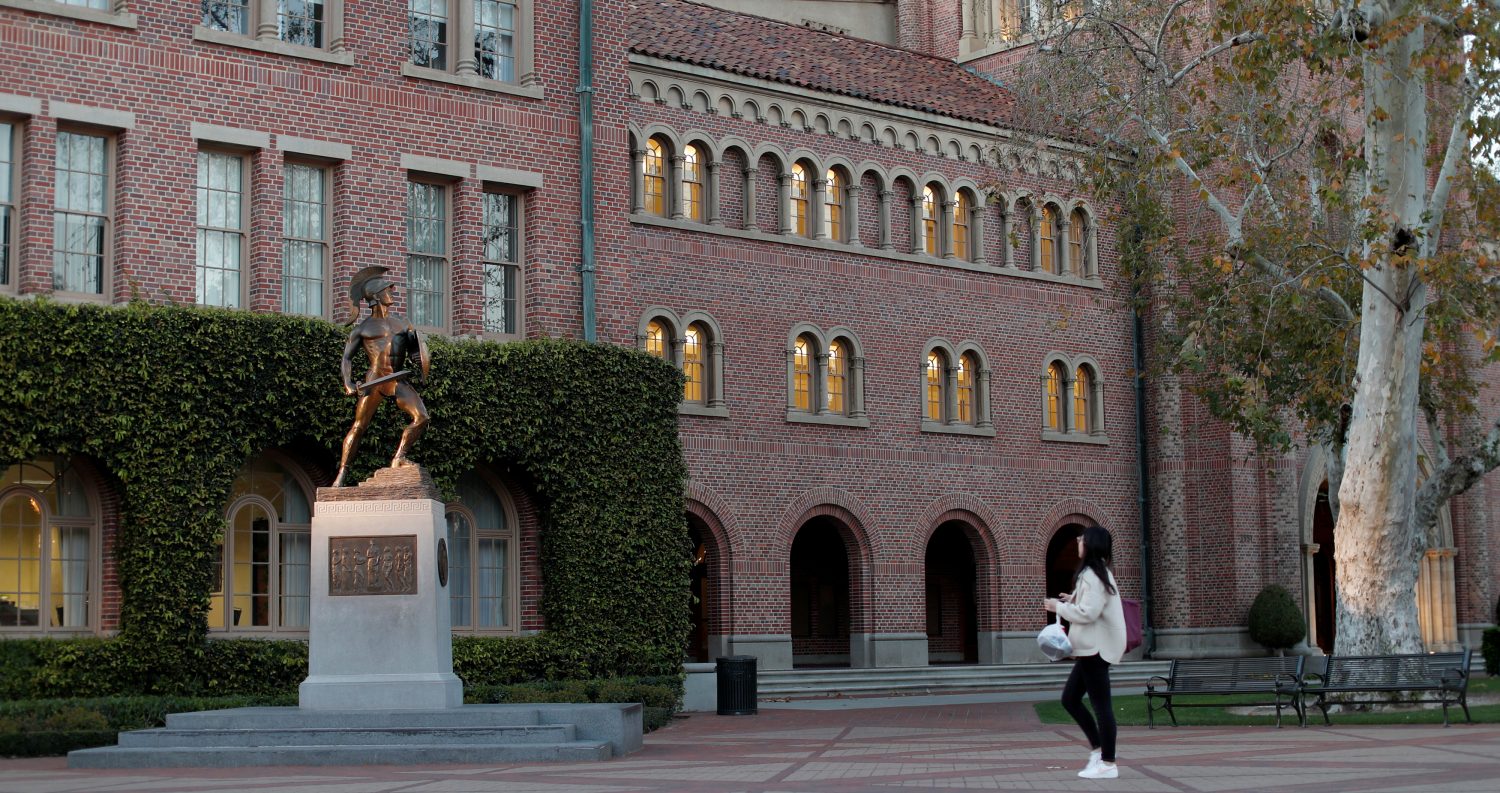 (Reuters) – The U.S. college admissions scandal that erupted this week has spawned lawsuits accusing rich, well-connected parents and prestigious schools of conspiring to admit those parents’ children at the expense of the less affluent.

Lawsuits began emerging on Wednesday, a day after federal prosecutors said a California company made about $25 million from parents seeking spots for their children in top schools including Georgetown University, Stanford University, the University of Southern California and Yale University.

In one civil lawsuit, Stanford students Erica Olsen and Kalea Woods said they were denied a fair opportunity to win admission to Yale and USC because of alleged racketeering, and said their degrees from Stanford will be devalued.

Singer and eight schools, including Stanford, were named as defendants in the lawsuit, which seeks unspecified damages.

Another lawsuit by Joshua Toy and his mother said he was denied college admission despite a 4.2 grade point average, and seeks $500 billion of damages from 45 defendants for defrauding and inflicting emotional distress on everyone whose “rights to a fair chance” to enter college was stolen.

“These class-action cases are opportunistic creatures of lawyers trying to obtain a windfall,” Donald Heller, a lawyer for Singer, said in a phone interview.

Lawyers for the plaintiffs did not immediately respond to requests for comment.

Both lawsuits were filed in California. More lawsuits are likely.

The Stanford case is notable because that school is among the country’s most prestigious and selective, admitting just 4.3 percent of its applicants last year.

But Olsen and Woods said their degrees are “now not worth as much” because prospective employers might question whether they were admitted on merit, or had parents whose bribes got them in.

A Stanford spokesman said the university is reviewing the lawsuit. 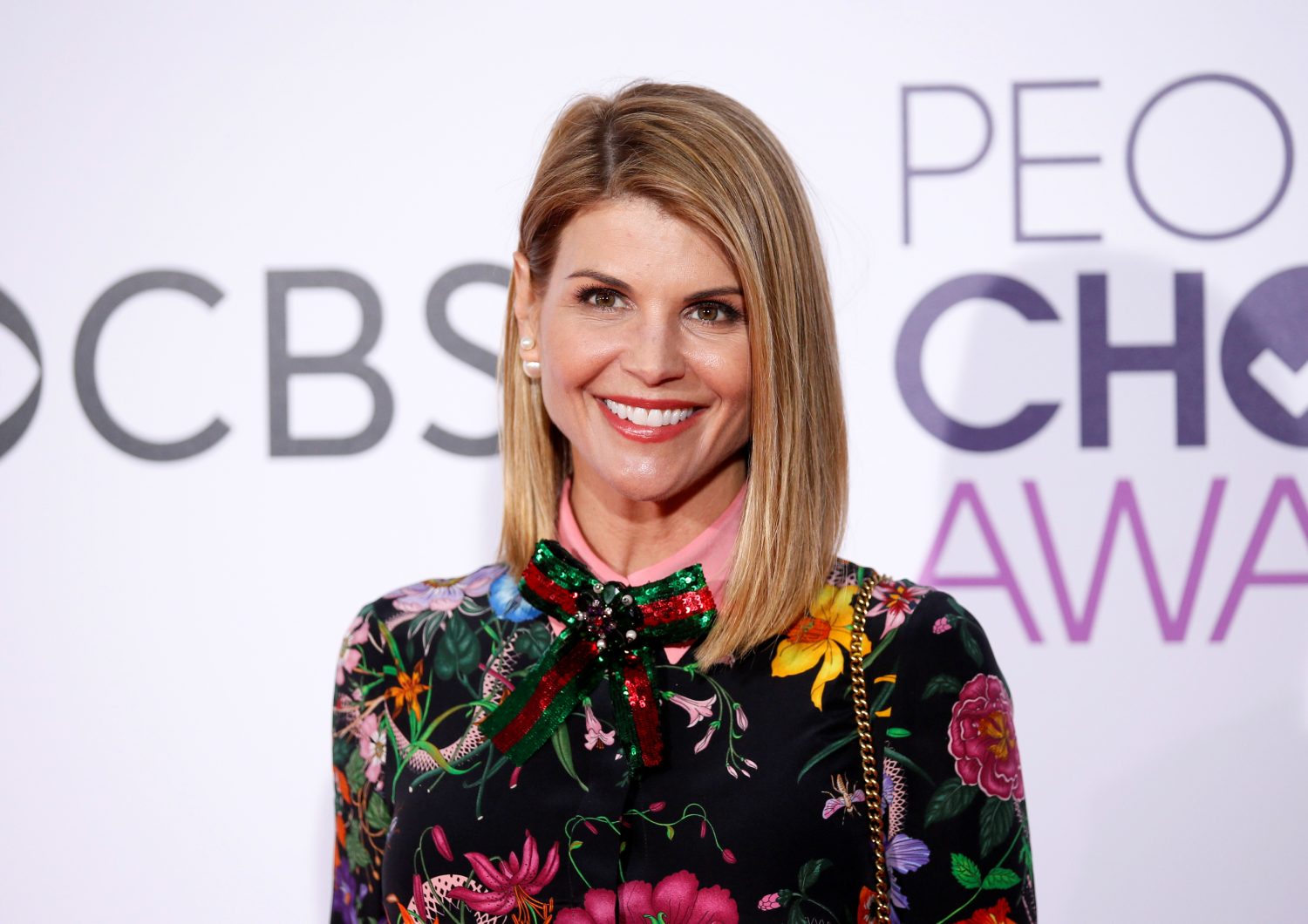 By Nate Raymond and Alex Dobuzinskis

BOSTON/LOS ANGELES (Reuters) – “Full House” actor Lori Loughlin and the former head of financial firm Pimco are due to face criminal charges on Wednesday related to a $25 million scheme to help wealthy Americans secure places for their children in top U.S. colleges.

The two are among 50 people charged for taking part in the largest such scam in U.S. history, which steered students into elite universities including Yale, Georgetown and Stanford by cheating the admissions process.

Loughlin was taken into custody by FBI agents in Los Angeles on Wednesday morning, Laura Eimiller, a spokeswoman for the Federal Bureau of Investigation, said. Former Pimco Chief Executive Douglas Hodge is due to be arraigned in federal court in Boston, officials said.

Another parent charged in the scheme, Manuel Henriquez, resigned as chief executive officer of the finance company Hercules Capital, the company said early on Wednesday.

The mastermind of the scheme, William “Rick” Singer, on Tuesday pleaded guilty to racketeering charges. Prosecutors in the U.S. attorney’s office in Boston say his company, Edge College &amp; Career Network, amassed $25 million through the fraud.

Singer ended up cooperating with investigators last year, helping them record incriminating conversations he had with Loughlin, Henriquez and other parents.

The elaborate scheme involved bribing the administrators of college entrance tests to allow a child’s wrong answers to be corrected and bribing university athletic coaches to attest a child was a gifted athlete even if he or she was anything but.

In some instances, Singer helped doctor photographs to make a child appear athletic. Parents made their payments to a sham charity that Singer ran, prosecutors said, which also allowed them to make a fraudulent tax write-off. The sham charity, the Key Worldwide Foundation, purported to help provide an education to “underprivileged students.”

It was unclear how many children benefited from the scheme, though investigators said more parents and coaches may yet be charged. In telephone conversations intercepted by investigators, Singer brags he helped 760 students in just the first few months of 2018 and 96 the year before, while in other conversations he reassures parents that he has helped more than 20 or 30 other students cheat in recent years.

Loughlin is accused of paying Singer $500,000 to help cheat her daughters’ way into the University of Southern California (USC) by bribing rowing coaches at the school to pretend the girls were gifted rowers. Her husband, the designer Mossimo Gianulli, is also charged with fraud, and appeared in court in Los Angeles on Tuesday before being released on $1 million bail.

One of the daughters, Olivia Gianulli, has become a prominent influencer on social media under the name “Olivia Jade.”

“Officially a college student!” she captioned an Instagram photograph she posted in September, which showed her in her USC dorm room decorated with items she had ordered from online retailer Amazon, which paid her for the post.

Representatives of accused parents either declined to comment or did not respond to inquiries. Several of the coaches accused of accepting bribes have been fired, placed on leave or have resigned. 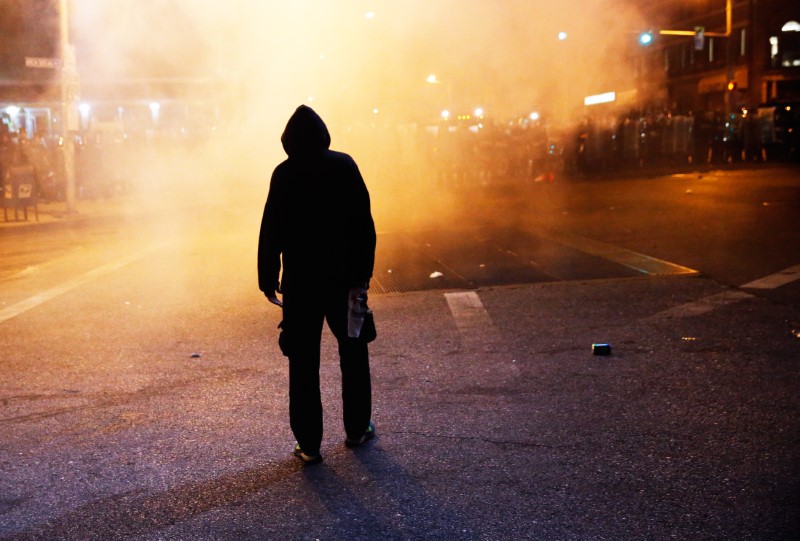 (Reuters) – Seven Baltimore police officers were arrested on Wednesday on federal racketeering charges for robbing and extorting up to $200,000 from victims, along with stealing guns and drugs, prosecutors said.

Many of the alleged shakedowns took place while the Baltimore Police Department was under intense media scrutiny and facing a U.S. Justice Department civil rights investigation for the 2015 police-involved death of a black man that plunged the largely African-American city into turmoil.

The officers, all members in 2015 and 2016 of a gun-crime investigation unit, stole firearms, drugs and cash ranging from $200 to $200,000 from victims, some of whom had not committed crimes, Rosenstein’s office said in a statement.

The investigation began about a year ago as an outgrowth of a federal Drug Enforcement Administration probe into a drug-trafficking ring, Rosenstein said. One of the officers also faces a charge of possessing and planning to distribute heroin.

The officers had initial appearances on Wednesday in a U.S. court in Baltimore and were ordered held pending detention hearings, a spokeswoman for Rosenstein said.

In a statement, Police Commissioner Kevin Davis said: “Reform isn’t always a pretty thing to watch unfold, but it’s necessary in our journey toward a police department our City deserves.”

The head of the Baltimore City Fraternal Order of Police union, Gene Ryan, said in a statement he was “very disturbed” over the charges, but declined further comment until the cases were resolved.

They face a maximum of 20 years in prison for each count.

Baltimore was torn by rioting in April 2015 after a black man, Freddie Gray, died from an injury suffered in police custody. Six officers were indicted, but none were convicted.

Baltimore and the Justice Department reached agreement last month on a consent decree that calls for police reforms. The decree is awaiting approval by a federal judge.

(Reporting by Ian Simpson in Washington; Editing by Peter Cooney)