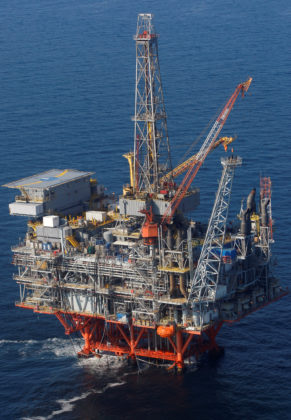 FILE PHOTO: The Petronius oil platform is seen from the air, located 100 miles (161 km) off the coast of New Orleans in the Gulf of Mexico June 3, 2008. REUTERS/Jessica Rinaldi

HOUSTON (Reuters) – Oil and gas workers withdrew en masse from U.S. offshore production facilities and onshore refineries began preparations on Wednesday as Hurricane Delta was forecast to grow into a powerful storm over the Caribbean on its way to the Gulf of Mexico.

Delta’s winds declined to 105 miles per hour (169 kph) as it tore across Mexico’s Yucatan peninsula early Wednesday. It is expected to enter the Gulf of Mexico and re-intensify into a Category 3 storm, the National Hurricane Center said.

Oil producers had evacuated 57 production facilities in the U.S. Gulf of Mexico by Tuesday and halted 540,000 barrels per day of oil and 232 million cubic feet per day of natural gas production. The region accounts for about 17% of U.S. oil output.

After weakening over the Yucatan, Delta is expected to re-strengthen and grow into a massive storm. A “life-threatening storm surge and strong winds are likely over a large portion of the northwestern and northern Gulf coast,” the NHC said.

Energy prices were mixed. Natural gas futures were up nearly 2% on storm shut-ins and export disruptions. U.S. crude oil and gasoline futures each fell about 3%.

Delta is expected to strike the U.S. Gulf Coast on the weekend as the 10th named storm to make a U.S. landfall this year, eclipsing a record that has held since 1916.

Oil companies have had to evacuate workers repeatedly this year with departures and returns complicated by pandemic related quarantines and virus testing for offshore staff.

Delta’s evacuations were at least the sixth time that some companies have had to remove staff and curtail production since June.

W&T Offshore Inc, one of the smaller Gulf of Mexico producers, estimated the storms cost it 9,000 barrels of oil and gas per day in the latest quarter, more than a fifth of its targeted output.

Phillips 66 said Delta would delay the restart of its Lake Charles refinery, a Louisiana plant shut by August’s Hurricane Laura. A second plant, on the Louisiana coast, has remained closed since a mid-September storm for maintenance.

Shell, the largest Gulf of Mexico offshore oil producer by volume, evacuated staff from nine facilities and Chevron Corp evacuated and shut production on all its Gulf of Mexico platforms. BP Plc, BHP, Occidental Petroleum Corp, and Murphy Oil pulled workers out and halted some production.