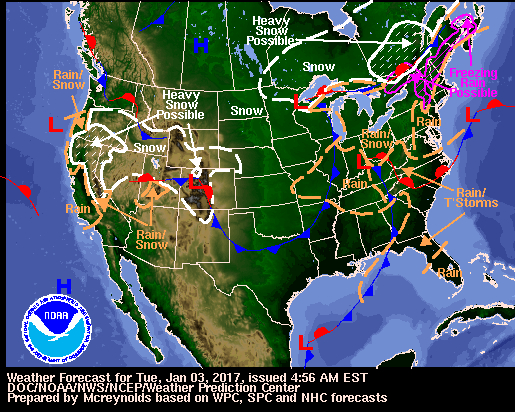 (Reuters) – A severe storm system that left five people dead in the U.S. South is expected to weaken significantly on Tuesday, bringing only light rainfall along the East Coast, officials said.

The storms eased a day after strong winds from what is believed to have been a tornado killed four people in southeast Alabama, and a man was found drowned in floodwater in northwest Florida, state officials said.

“The threat of severe weather is much lower today,” meteorologist Bob Oravec of the Weather Prediction Center said by telephone.

Between half an inch and an inch (1.3 to 2.5 cm) of rain was expected to fall along the East Coast on Tuesday, including in Washington D.C. and in parts of Virginia, Pennsylvania, New York and New Jersey, Oravec said.

The rainfall threat was diminishing as the storm moved out of the South toward the U.S. Northeast, he said.

Unlike on Monday, when 3 to 5 inches (7.6 to 12.7 cm) of rain soaked parts of the U.S. South, causing flooding in some areas, no major floods were expected along the East Coast.

“Without a doubt it will be quieter” than on Monday, John Hart, a meteorologist with the Storm Prediction Center, said.