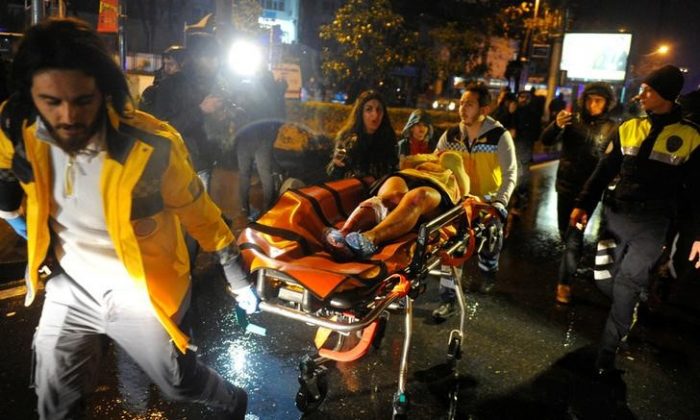 An injured woman is carried to an ambulance from a nightclub where a gun attack took place during a New Year party in Istanbul, Turkey. Murat Ergin/Ihlas News Agency via REUTERS

By Humeyra Pamuk and Daren Butler

ISTANBUL (Reuters) – The gunman who killed 39 people in an Istanbul nightclub on New Year’s Day in an attack claimed by Islamic State appears to have been well versed in guerrilla warfare and may have trained in Syria, a newspaper report and a security source said on Tuesday.

The attacker, who remains at large, shot dead a police officer and a civilian at the entrance to the exclusive Reina nightclub on Sunday. He then opened fire with an automatic rifle inside, reloading his weapon half a dozen times and shooting the wounded as they lay on the ground.

In a statement claiming the attack on Monday, Islamic State described the club as a gathering point for Christians celebrating their “apostate holiday” and said the shooting was revenge for Turkish military involvement in Syria.

“The assailant has experience in combat for sure … he could have been fighting in Syria for years,” one security source told Reuters, saying that he was likely to have been directed in his actions by the jihadist group. 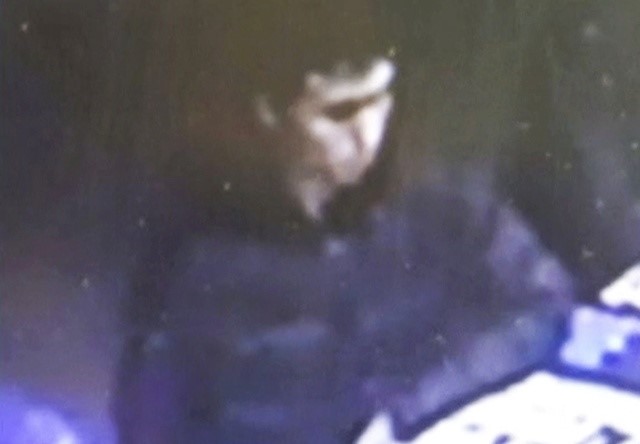 A Turkish police handout picture made avalible on January 2, 2017 of a suspect in Istanbul nightclub attack which killed at least 39 people on New Year’s Eve. REUTERS/Reuters TV/Handout

The Haberturk newspaper said police investigations revealed that the gunman had entered Turkey from Syria and went to the central city of Konya in November, traveling with his wife and two children so as not to attract attention.

Some Turkish media reported that police were seeking a 28-year-old Kyrgyz national believed to be the gunman.

Kyrgyzstan’s security service said it was in touch with Turkish authorities and that a man had been questioned by Kyrgyz police and then released.

Turkish officials have not commented on the details of the investigation. But government spokesman Numan Kurtulmus said on Monday that the authorities were close to fully identifying the gunman, after gathering fingerprints and information on his appearance.

The state-run Anadolu news agency said a total of 14 people had been detained. Two foreign nationals were detained at Istanbul’s main Ataturk airport in connection with the attack, broadcaster NTV said.

A selfie video of the alleged attacker, apparently walking around Istanbul’s central Taksim Square, was broadcast by Turkish news channels on Tuesday as police operations to track him down continued.

Kurtulmus made no reference to the Islamic State claim of responsibility on Monday but said it was clear Turkey’s military operations in Syria had annoyed terrorist groups and those behind them.

NATO member Turkey is part of the U.S.-led coalition against Islamic State and since August has been conducting military operations inside Syria to drive the radical Sunni militants, as well as Kurdish militia fighters, away from its borders.

Islamic State has been blamed for at least half a dozen attacks on civilian targets in Turkey over the past 18 months; but, other than assassinations, it was the first time it has directly claimed any of them. It made the statement on one of its Telegram channels, a method used after attacks elsewhere.

Haberturk cited a barman at the club as saying the gunman had thrown explosive devices several times during the shooting spree, apparently in order to disorientate people and give himself time to reload.

Several witnesses who spoke to Reuters also said there had been small explosions during the attack.