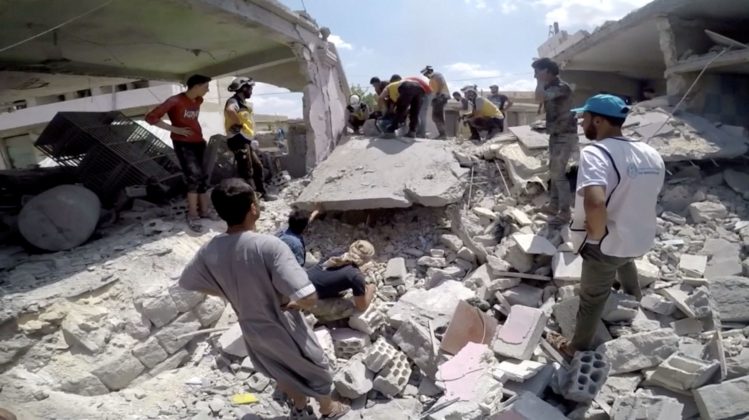 GENEVA (Reuters) – More than 60 medical facilities have been hit in Syria’s Idlib province in the past six months, including four this week, and appear to have been deliberately targeted by government-affiliated forces, a U.N. rights spokesman said on Friday.

Idlib in Syria’s northwest, the target of a Russian-backed offensive launched this summer to capture it and surrounding areas, is part of the last major rebel bastion in Syria’s 8 1/2-year war.

Since April 29, 61 medical facilities have been hit there, including some that were struck several times, U.N. human rights spokesman Rupert Colville told journalists.

“We can’t determine if every single attack is deliberate but the large scale of these attacks…strongly suggests that government-affiliated forces conducting these strikes are, at least partly, if not wholly, deliberately striking health facilities,” he said at a Geneva news briefing.

“They can’t possibly all be accidents,” he told Reuters later. He said that, if it is proven that any or some of these were deliberate, they would amount to war crimes.

Damage was reported at the Kafr Nobol hospital on Nov. 6 – which had also been hit in May and July – and two air strikes also directly hit the al-Ikhlas hospital in southern Idlib, incapacitating it this week, Colville said.

Pressure is building for an investigation into attacks on Syrian hospitals amid allegations that hundreds have taken place over the course of the 8-1/2 year conflict.

The United Nations passes on information provided by NGOs about the location of medical facilities along with other data to parties to the conflict. The aim of this is to avoid attacks on such facilities, which are protected under international humanitarian law, but it has been criticized as a means of facilitating exactly the opposite.

Syria’s war has claimed the lives of hundreds of thousands and forced 13 million people from their homes, half of whom have left their wrecked country.

Since a Turkish-led offensive across Syria’s northern border a month ago to push out Kurdish YPG fighters, at least 92 civilians have been killed in northern and northeastern Syria, Colville added.

That offensive displaced 200,000 people, of whom nearly half of them remain displaced are dispersed across camps and shelters, Najat Rochdi, Senior Humanitarian Adviser to the United Nations Special Envoy for Syria, said on Friday.

A U.N.-backed panel met for the first time in Geneva this week, with delegates from the government, opposition and civil society, in what the United Nations says is an important step on the long road to political rapprochement in Syria.