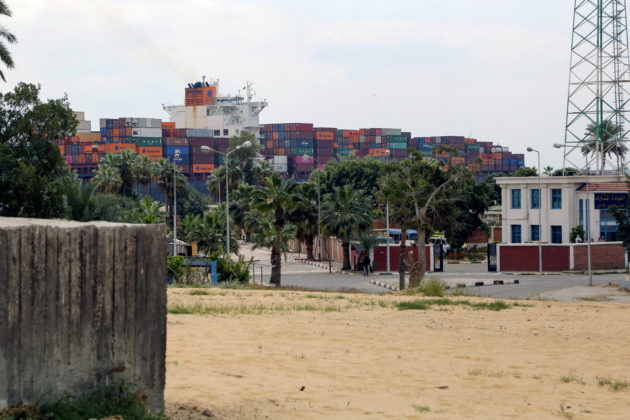 Ships are seen after sailing through Suez Canal as traffic resumes after a container ship that blocked the waterway was refloated, in Ismailia, Egypt, March 30, 2021. REUTERS/Hanaa Habib

ISMAILIA, Egypt (Reuters) – The Suez Canal expects 140 ships to pass on Tuesday after the freeing of a container ship stranded for nearly a week allowed it to reopen, but disruptions to global shipping and at ports could take months to resolve, experts warned.

Shipping convoys through the canal resumed on Monday evening after tugs pulled the 400-metre-long (430-yard) Ever Given container carrier free from the spot where it became wedged amid high winds on March 23.

The Ever Given’s grounding across a southern section of the canal forced a halt to all traffic, leading to a build-up of 422 ships at either end of the canal and along its course.

Suez Canal Authority chairman Osama Rabie said 95 ships would pass by 1900 local time (1700 GMT) on Tuesday and a further 45 by midnight, reasserting that he hoped a backlog caused by the blockage would be cleared in three to four days.

However, knock-on effects to global shipping and at ports could take much longer to resolve.

Though the build-up around the Suez Canal might be cleared in four to five days, it could take several months to deal with backlogs at ports, Jan Hoffmann, an UNCTAD expert on logistics, told a briefing.

Egyptian President Abdel Fattah al-Sisi said the Ever Given’s grounding had drawn attention to the importance of the waterway for global trade.

“We didn’t hope for something like this, but fate was doing its work. It showed and reaffirmed the reality and importance” of the canal, Sisi said as he greeted staff on a visit to the Suez Canal Authority in Ismailia.

“We want to reaffirm in a clear message to the world that everything is back to the way it was,” he later told reporters from a platform on the canal, as container ships passed behind him.

Shipping group Maersk has said the knock-on disruptions to international shipping could take weeks or months to unravel.

Rabie has said the SCA will look at giving discounts to shippers affected by the stoppage.

The Japanese owner of the Ever Given said it had not received any claims or lawsuits over the blockage.