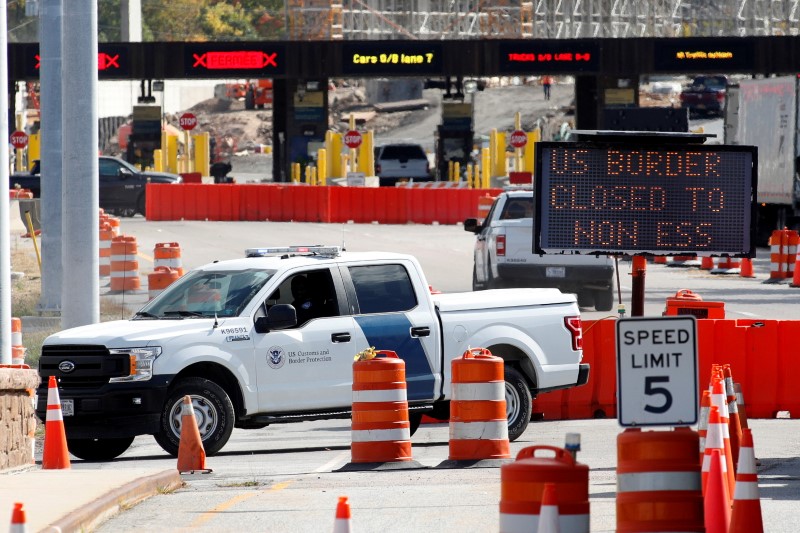 OTTAWA (Reuters) -Canada is extending a ban on non-essential travel with the United States and the rest of the world until July 21, Public Safety Minister Bill Blair said on Friday, prompting frustration from businesses worried about the economic damage.

Canada’s Liberal government is under increasing pressure from businesses and the tourism industry to ease the ban, which was first imposed in March 2020 to help contain spread of the coronavirus and has been renewed on a monthly basis ever since.

“In coordination with the U.S., we are extending restrictions on non-essential international travel and with the United States until July 21st, 2021,” Blair said on Twitter.

Ottawa will reveal on June 21 how it plans to start lifting the measures for fully vaccinated Canadians and others who are currently permitted to enter Canada, he added.

Although the ban does not affect trade in goods, it is hitting travel operators and the export of services.

The Canadian Chamber of Commerce – a national group that advocates for businesses – lamented what it said was Ottawa’s sluggishness, especially as around 75% of Canada’s population had already had at least one dose of a coronavirus vaccine.

“I’m disappointed … all of the science would say we should be moving ahead to reopen the border. We don’t even have a plan at this point,” said Perrin Beatty, the group’s president and chief executive.

“Unfortunately, Canada is the proverbial deer caught in the headlights … we are the world leader in terms of first shots and we are a world laggard when it comes to having a strategy,” he said in a phone interview.

Health Minister Patty Hajdu last week said the federal government was preparing to lift quarantine protocols for citizens who had received their second dose of a vaccine.

The U.S. government has created working groups with both Mexico and Canada to discuss the restrictions. The groups held their initial meetings this week, sources told Reuters.

(Additional reporting by David Shepardson in Washington;Editing by Bill Berkrot and Paul Simao) 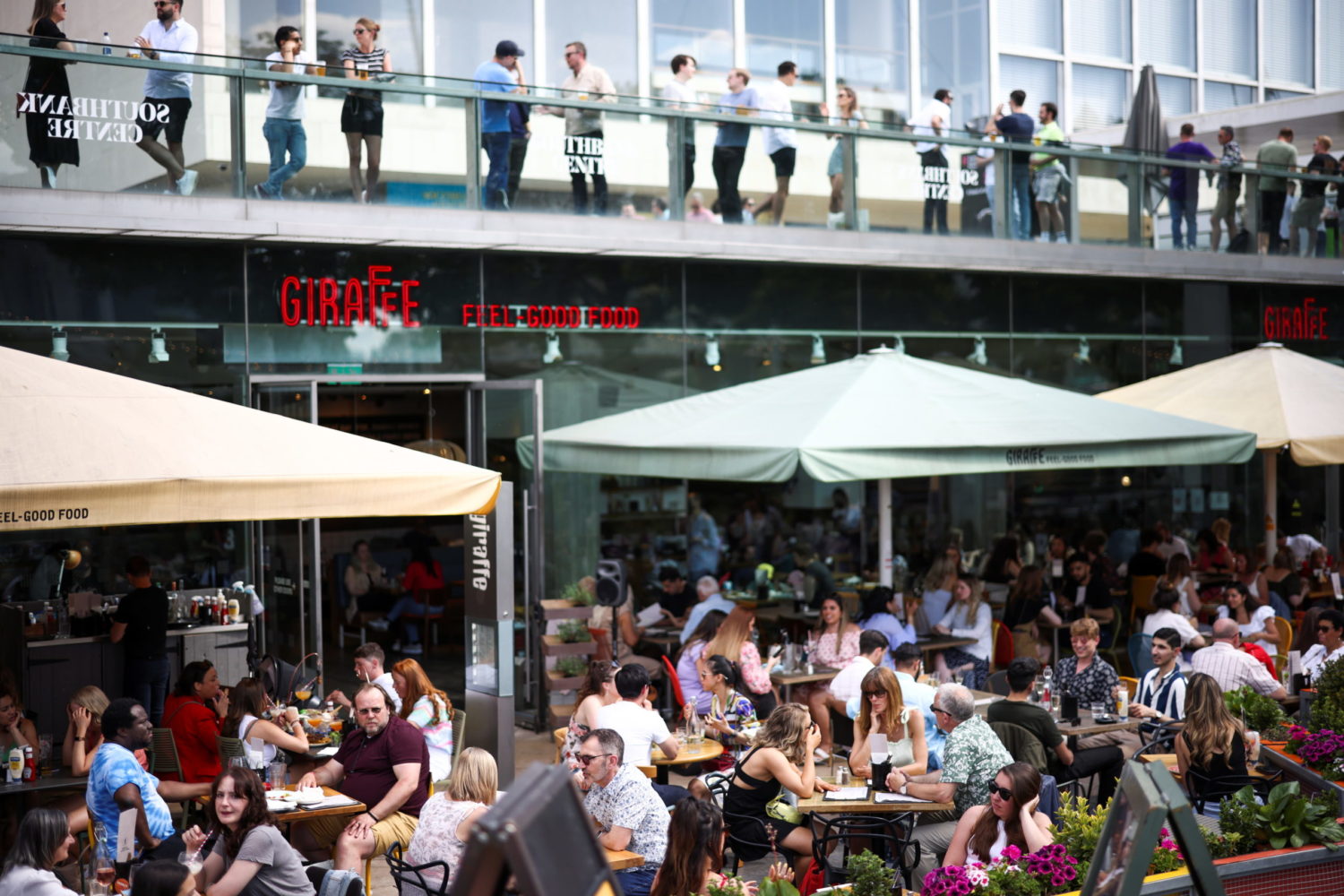 By Alistair Smout and William James

LONDON (Reuters) -Prime Minister Boris Johnson delayed his plans to lift most remaining COVID-19 restrictions by a month on Monday, warning that thousands more people might die if he did nothing because of the rapid spread of the more infectious Delta variant.

Under the final stage of a plan outlined by Johnson in February, he had hoped to lift most social restrictions on June 21, meaning pubs, restaurants, nightclubs and other hospitality venues could fully reopen.

That much-anticipated step was pushed back to July 19.

“I think it is sensible to wait just a little longer,” Johnson told a news conference. “As things stand, and on the evidence that I can see right now, I’m confident that we will not need more than four weeks.”

The extra time would be used to speed up Britain’s vaccination program – already one of the world’s furthest advanced – by shortening the recommended time between doses for those aged over 40 to eight weeks from 12 weeks.

The situation would be reviewed on June 28, which could allow the reopening to be brought forward, although Johnson’s spokesman said that was considered unlikely.

In recent weeks there has been fast growth in new cases caused by the Delta variant, first discovered in India. Health officials believe it is 60% more transmissible than the previous dominant strain and scientists have warned that it could trigger a third wave of infections.

The opposition Labor Party blamed the government for the delay, saying it had been too slow to close borders to travelers from India.

On Monday, Britain recorded 7,742 new COVID-19 cases and three deaths. Johnson said the number of cases was growing by about 64% per week and the number of people in hospitals’ intensive care units was rising.

“By being cautious now we have the chance in the next four weeks to save many thousands of lives by vaccinating millions more people,” he said.

Britain has officially reported almost 128,000 deaths since the start of the pandemic, the seventh highest number globally.

Monday’s decision was based on scientific modelling which showed that, if the reopening went ahead as planned, under some scenarios hospitalizations could match those in March last year when ministers feared the health system could be overwhelmed.

“The four week delay should reduce the peak – whatever it would be – by something between 30 and 50%,” the government’s Chief Scientific Adviser Patrick Vallance said.

Unlike in March 2020, the increase in hospitalizations was likely to be among younger people who require shorter treatment and are less at risk of dying.

Nevertheless, the risk of increased pressure on the health system meant that the tests the government set out for going ahead with the reopening had not been met.

Johnson sets COVID-19 restrictions for England, with devolved administrations in Scotland, Wales and Northern Ireland making their own policy.

There are no plans to extend new economic help to businesses as a result of the delay, Johnson said. He said current data on vaccines and infections showed no need to do so.

Britain’s furlough program supports just over 2 million jobs and is due to continue until the end of September. But from July employers will have to pay 10% of furloughed staff’s wages, rising to 30% in September.

The hospitality industry has also called for an extension of other sector-specific aid. The Society of London Theatre and UK Theatre said thousands of jobs were hanging in the balance.

Despite Monday’s delay, the government lifted some restrictions on the number of guests allowed to attend weddings, and will continue pilots of crowds at sporting events and theatrical shows.

Deutsche Bank estimated last week that a four-week delay would temporarily reduce gross domestic product by around 0.25% – a fraction of the historic 9.8% slump recorded in 2020.

It comes despite Britain having one of the fastest vaccine rollouts in the world. More than 41 million people have received their first shot and nearly 30 million have had both doses – about 57% of the adult population. 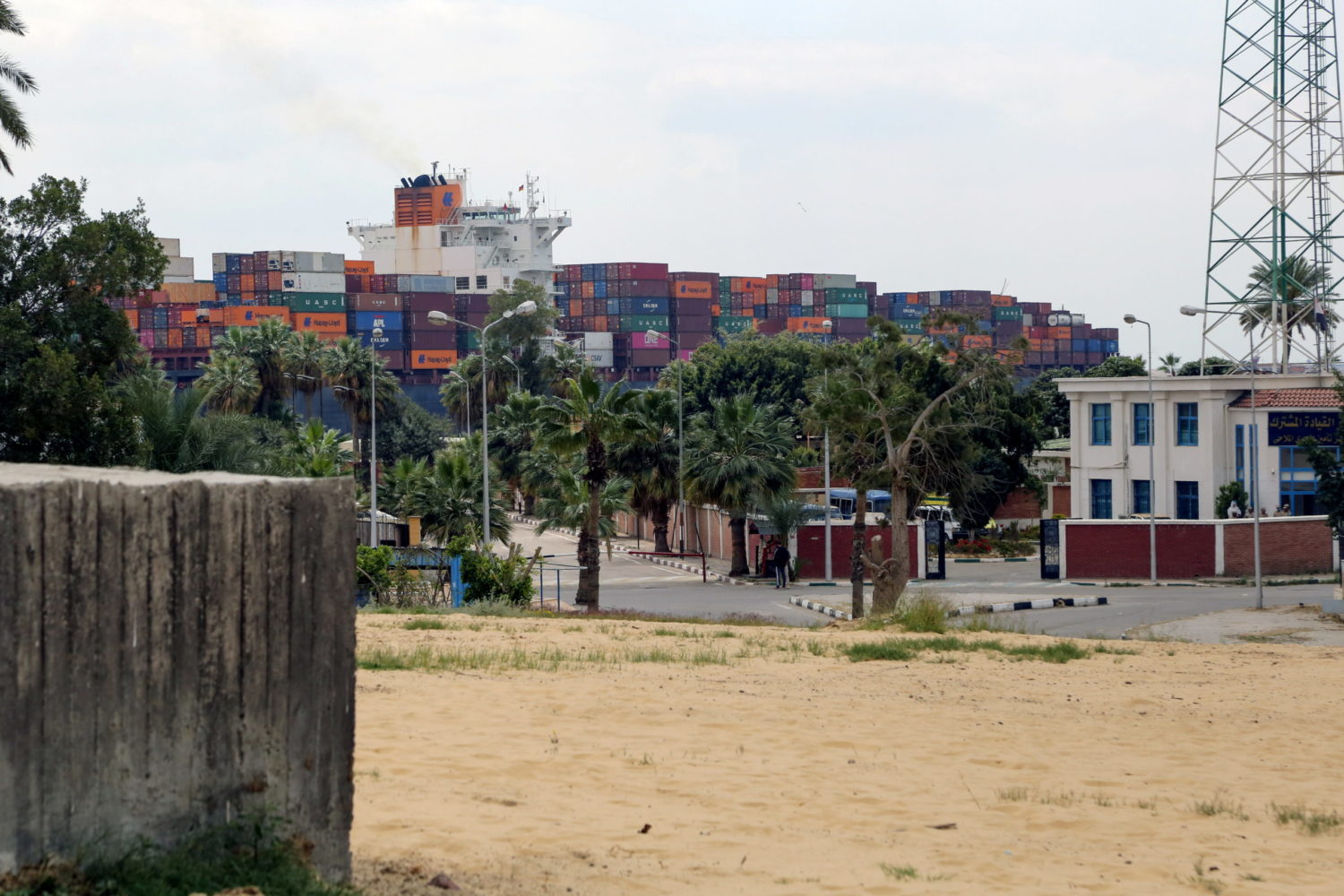 ISMAILIA, Egypt (Reuters) – The Suez Canal expects 140 ships to pass on Tuesday after the freeing of a container ship stranded for nearly a week allowed it to reopen, but disruptions to global shipping and at ports could take months to resolve, experts warned.

Shipping convoys through the canal resumed on Monday evening after tugs pulled the 400-metre-long (430-yard) Ever Given container carrier free from the spot where it became wedged amid high winds on March 23.

The Ever Given’s grounding across a southern section of the canal forced a halt to all traffic, leading to a build-up of 422 ships at either end of the canal and along its course.

Suez Canal Authority chairman Osama Rabie said 95 ships would pass by 1900 local time (1700 GMT) on Tuesday and a further 45 by midnight, reasserting that he hoped a backlog caused by the blockage would be cleared in three to four days.

However, knock-on effects to global shipping and at ports could take much longer to resolve.

Though the build-up around the Suez Canal might be cleared in four to five days, it could take several months to deal with backlogs at ports, Jan Hoffmann, an UNCTAD expert on logistics, told a briefing.

Egyptian President Abdel Fattah al-Sisi said the Ever Given’s grounding had drawn attention to the importance of the waterway for global trade.

“We didn’t hope for something like this, but fate was doing its work. It showed and reaffirmed the reality and importance” of the canal, Sisi said as he greeted staff on a visit to the Suez Canal Authority in Ismailia.

“We want to reaffirm in a clear message to the world that everything is back to the way it was,” he later told reporters from a platform on the canal, as container ships passed behind him.

Shipping group Maersk has said the knock-on disruptions to international shipping could take weeks or months to unravel.

Rabie has said the SCA will look at giving discounts to shippers affected by the stoppage.

The Japanese owner of the Ever Given said it had not received any claims or lawsuits over the blockage. 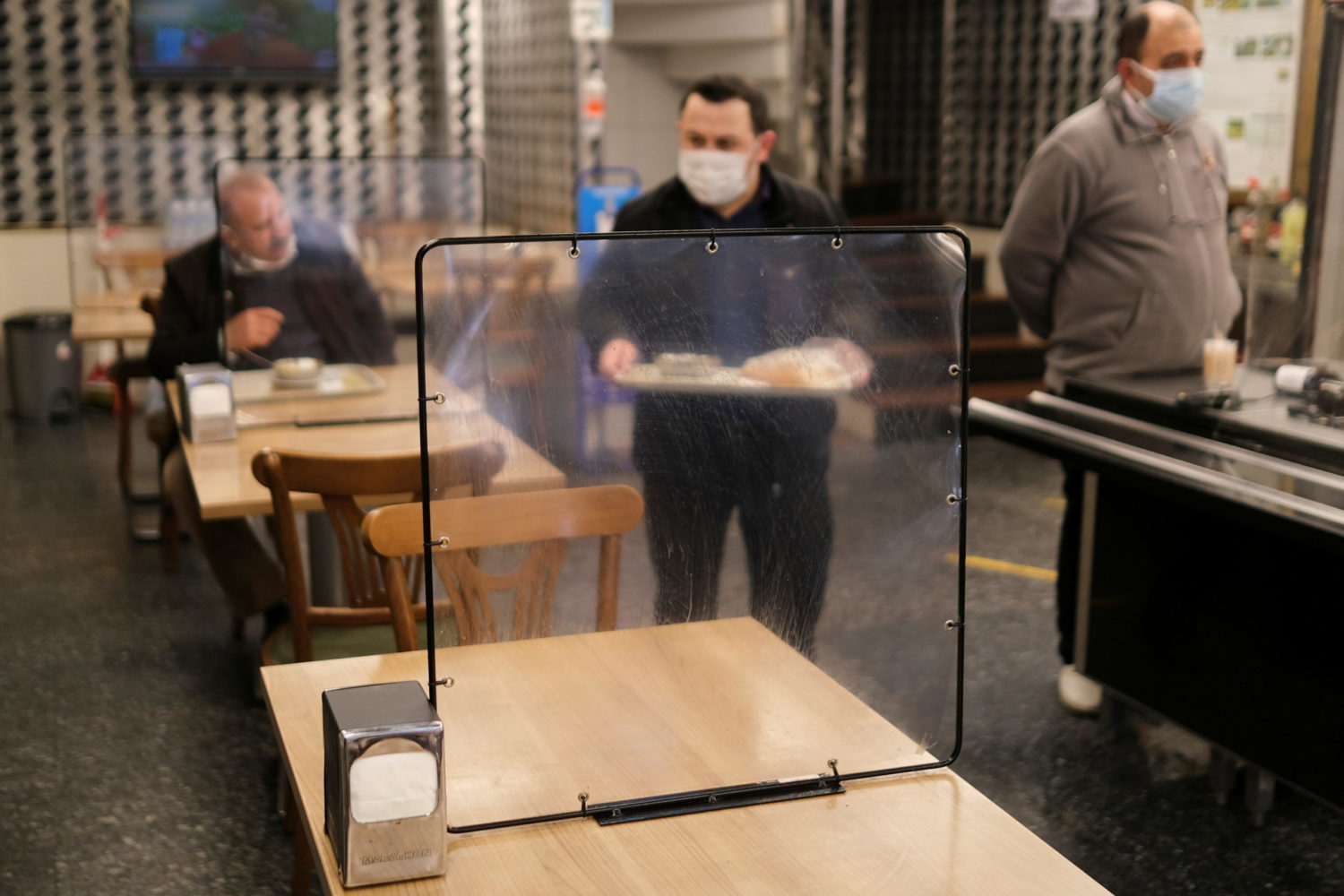 By Canan Sevgili and Daren Butler

ISTANBUL (Reuters) – Turkish restaurants reopened and many children returned to school on Tuesday after the government announced steps to ease COVID-19 restrictions even as cases edged higher, raising concerns among the top medical association.

On Monday evening, President Tayyip Erdogan lifted weekend lockdowns in low- and medium-risk cities and limited lockdowns to Sundays in those deemed higher risk under what he called a “controlled normalization.”

Café and restaurant owners, limited to takeaway service for much of last year, have long urged a reopening of in-house dining after sector revenues dropped 65%. They also want relief from growing debt, and from social security and tax payments.

“We were serving 4,000-5,000 people a week. Now with takeaway services we are serving only 500 people,” Istanbul-based Pideban restaurant owner Yusuf Kaptanoglu said before the easing measures were announced.

“I did not benefit from any support including loan support,” he said.

Yet the moves come as new daily coronavirus cases rose to 11,837 on Tuesday, the highest since Jan. 7 and up from 9,891 a day earlier, according to official data. Cases were around 6,000 in late January.

“The number of mutant virus cases is increasingly rising. We do not see conditions to return to an old ‘normal’,” the Turkish Medical Association said on Twitter, calling for higher rates of testing and inoculation.

“Political and economic interests must not take precedence over human life and science,” it added.