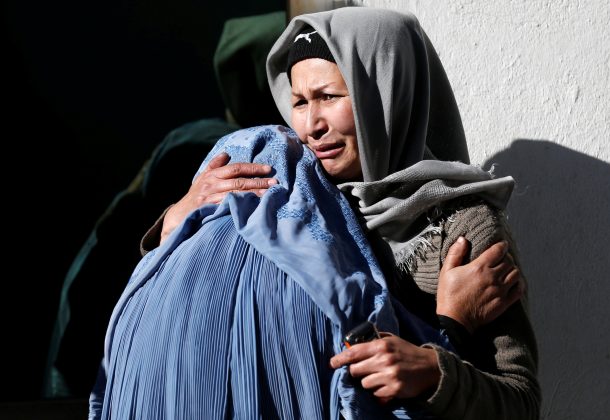 KABUL (Reuters) – Suicide bombers stormed a Shi’ite cultural center and news agency in the Afghan capital on Thursday, killing more than 40 people and wounding scores, many of them students attending a conference.

Islamic State said in an online statement that it was responsible for the attack, the latest in a series the movement has claimed on Shi’ite targets in Kabul.

Waheed Majrooh, a spokesman for the ministry of public health, said 41 people, including four women and two children, had been killed and 84 wounded, most suffering from burns.

The attack occurred during a morning panel discussion on the anniversary of the Soviet invasion of Sunni-majority Afghanistan at the Tabian Social and Cultural Centre, witnesses said.

The floor of the center, at the basement level, was covered in blood as wailing survivors and relatives picked through the debris, while windows of the news agency, on the second floor, were all shattered.

“We were shocked and didn’t feel the explosion at first but we saw smoke coming up from below,” said Ali Reza Ahmadi, a journalist at the agency who was sitting in his office above the center when the attack took place.

“Survivors were coming out. I saw one boy with cuts to his feet and others with burns all over their faces,” he said. “About 10 minutes after the first explosion, there was another one outside on the street and then another one.”

Deputy Health Minister Feda Mohammad Paikan said 35 bodies had been brought into the nearby Istiqlal hospital. Television pictures showed many of the injured suffered serious burns.

“There was a reading and an academic discussion and then there was a huge bang,” said Sayed Jan, a participant in the conference, from his bed in the hospital.

“I felt my face burning and I fell down and saw other colleagues lying around me and smoke everywhere.”

The bloodshed followed an attack on a private television station in Kabul last month, which was also claimed by the local affiliate of Islamic State.

Taliban spokesman Zabihullah Mujahid issued a statement on Twitter denying involvement in the attack, which was condemned by both the Kabul government and Afghanistan’s international partners including NATO and the United Nations.

“I have little doubt that this attack deliberately targeted civilians,” said Toby Lanzer, acting head of the United Nations Assistance Mission in Afghanistan. 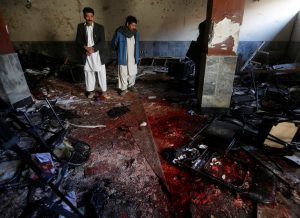 Afghan men inspect at the site of a suicide attack in Kabul, Afghanistan December 28, 2017. REUTERS/Omar Sobhani

“Today in Kabul we have witnessed another truly despicable crime in a year already marked by unspeakable atrocities.”

Over the past two years, Islamic State in Khorasan, as the local group is known, has claimed a growing number of attacks on Shi’ite targets in Afghanistan, where sectarian attacks were previously rare.

The movement, which first appeared in eastern Afghanistan in 2015, has extended its reach steadily, although many security officials question its ability to conduct complex attacks and believe it has help from criminals or other militant groups.

Prior to Thursday’s attack, there had been at least 12 attacks on Shi’ite targets since the start of 2016, in which almost 700 people were killed or wounded, according to United Nations figures. Before that, there had only been one major attack, in 2011.

Backed by the heaviest U.S. air strikes since the height of the international combat mission in Afghanistan, Afghan forces have forced the Taliban back in many areas and prevented any major urban center from falling into the hands of insurgents.

But high-profile attacks in the big cities have continued as militants have looked for other ways to make an impact and undermine confidence in security.

The attacks have increased pressure on Ghani’s Western-backed government to improve security. Much of the center of Kabul is already a fortified zone of concrete blast walls and police checkpoints, following repeated attacks on the diplomatic quarter of the city.

But militant groups have also hit numerous targets outside the protected zone, many in the western part of the city, home to many members of the mainly Shi’ite Hazara community.

“This gruesome attack underscores the dangers faced by Afghan civilians,” rights group Amnesty International said in a statement from its South Asia Director, Biraj Patnaik. “In one of the deadliest years on record, journalists and other civilians continue to be ruthlessly targeted by armed groups.”

According to a report this month by media freedom group Reporters without Borders, Afghanistan is among the world’s most dangerous countries for media workers with two journalists and five media assistants killed doing their jobs in 2017, before Thursday’s attack.

According to Sayed Abbas Hussaini, a journalist at Afghan Voice, one reporter at the agency was killed in Thursday’s attack and two were wounded.