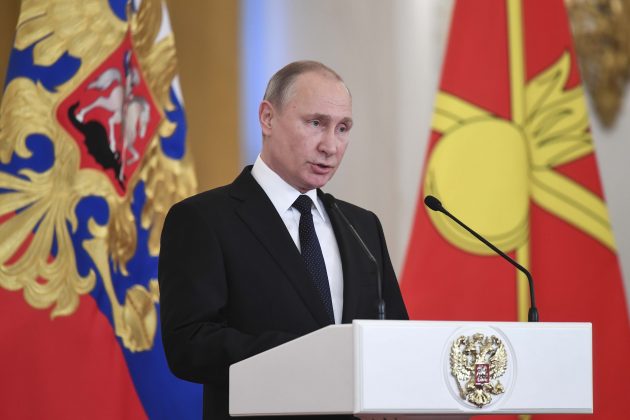 Russian President Vladimir Putin delivers a speech during a state awards ceremony for military personnel who served in Syria, at the Kremlin in Moscow, Russia December 28, 2017. REUTERS/Kirill Kudryavtsev/Pool

By Andrew Osborn and Denis Pinchuk

MOSCOW (Reuters) – Russian President Vladimir Putin said a bomb blast in a St. Petersburg supermarket on Wednesday was an act of terrorism, and that security forces whose lives were threatened by terrorist suspects should shoot to kill if necessary.

Putin, who is running for re-election in March, was speaking on Thursday at an awards ceremony in the Kremlin for Russian personnel who served in Russia’s Syria campaign, which Moscow has framed as an anti-terrorism operation.

“You know that yesterday in St. Petersburg a terrorist act was carried out,” Putin told the audience, referring to the explosion that injured 13 shoppers in a branch of the Perekrestok supermarket chain.

Investigators have opened a criminal case into Wednesday evening’s blast, which they say was caused by a homemade bomb packed with pieces of metal.

Russian media reports said the bomb was hidden inside a rucksack in a locker where shoppers leave their belongings and said the person who left the bomb, described as being of “non-Slavic appearance”, had been caught on CCTV.

No group has claimed responsibility.

Russia has repeatedly been the target of attacks by Islamist militant groups, including an attack in April that killed 14 people when an explosion tore through a train carriage in a metro tunnel in St. Petersburg.

That attack was claimed by a militant group which said the suicide bomber was acting on the orders of al Qaeda. Russian police detained several suspects in that attack from mainly Muslim states in ex-Soviet central Asia.

Putin told the ceremony the FSB security service, which he used to run before he became president, had also prevented “another attempted terrorist act”.

A Kremlin spokesman said Putin was referring to a foiled attack on Kazansky Cathedral, in St. Petersburg, Russia’s second city.

The Kremlin said earlier this month that a U.S. tip-off had helped thwart the attack in a rare public show of cooperation despite deep strains between the two countries. 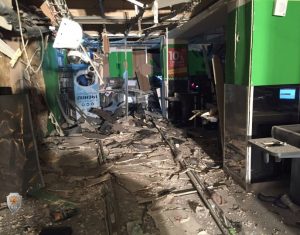 Russian media reported earlier this month that the Federal Security Service had detained seven members of an Islamic State cell who had been planning the attack.

Putin told the same awards ceremony that the security situation in Russia would be much worse if thousands of Russian citizens who fought with Islamic State in Syria had been allowed to return home.

“What would have happened if those thousands of people … returned to us (from Syria). If they returned with good weapons training …,” he said.

Russian security officials have said that thousands of citizens from ex-Soviet Central Asia or from the Muslim-majority North Caucasus region of Russia, which includes Chechnya, traveled to Syria or Iraq to fight with Islamic State.

Putin said security forces should take no chances with their own lives if confronted by terrorist suspects.

“I yesterday ordered the FSB director to act within the framework of the law when detaining these bandits of course, but if there is a threat to the life and well-being of our employees … to act decisively, not take any prisoners, and liquidate the bandits on the spot.”