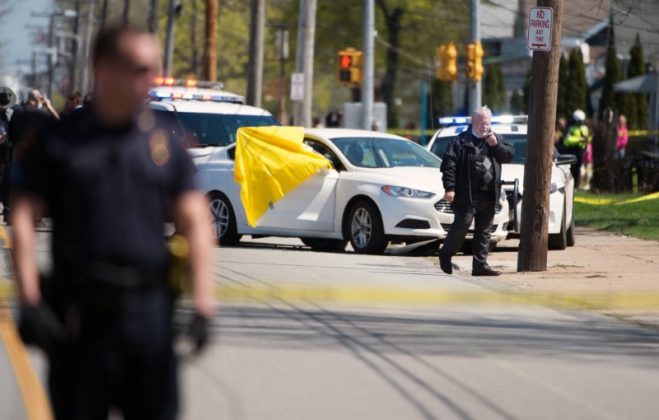 Coroner Lyell P. Cook (R) examines the car of a fugitive, who police said posted a video of himself on Facebook killing an elderly man in Cleveland, is seen after he shot and killed himself following a brief police pursuit in Erie, Pennsylvania, U.S. April 18, 2017. REUTERS/Robert Frank

ERIE, Pa. (Reuters) – A murder suspect who police said posted a video on Facebook of the killing of a Cleveland man fatally shot himself after a “brief pursuit” by Pennsylvania State Police officers on Tuesday, police said.

Steve Stephens was accused of shooting Robert Godwin Sr., 74, on a sidewalk on Sunday before fleeing in a car and uploading a video of the murder to Facebook, becoming the focus of a nationwide manhunt.

Pennsylvania State Police officers found Stephens in Erie County, Pennsylvania, after getting a tip from the public that his white Ford Fusion was parked outside a McDonald’s fast-food restaurant, Calvin Williams, the Cleveland police chief, told a news conference.

After a brief chase, Stephens stopped his vehicle, Williams said.

“As the officers approached that vehicle Steve Stephens took his own life,” Williams said. “We would have preferred that it had not ended this way,” he added, saying he and the community would have had “a lot of questions” for Stephens.

Stephens, who had no prior criminal record, was not suspected in any other killings, Cleveland officials said. Stephens said in a separate video on Facebook on Sunday that he had already killed a dozen others.

The company will do all it can to prevent content like Stephens’ post, Chief Executive Mark Zuckerberg told Facebook’s annual conference for software developers on Tuesday in San Jose.

Facebook on Monday said it would review how it monitors violent footage and other objectionable material in response to the killing after Stephens’ post was visible on the social media site for about two hours.

Beech Brook, a behavioral health facility in a Cleveland suburb where Stephens had worked since 2008, said in a statement on Tuesday that Stephens had cleared an extensive background check.

In interviews before Stephens’ death, some of Godwin’s relatives forgave his killer.

“I forgive him because we are all sinners,” Robby Miller, Godwin’s son, said in an interview with CNN.

Others were less sympathetic.

“All I can say is that I wish he had gone down in a hail of 100 bullets,” Godwin’s daughter, Brenda Haymon, told CNN. “I wish it had gone down like that instead of him shooting himself.”