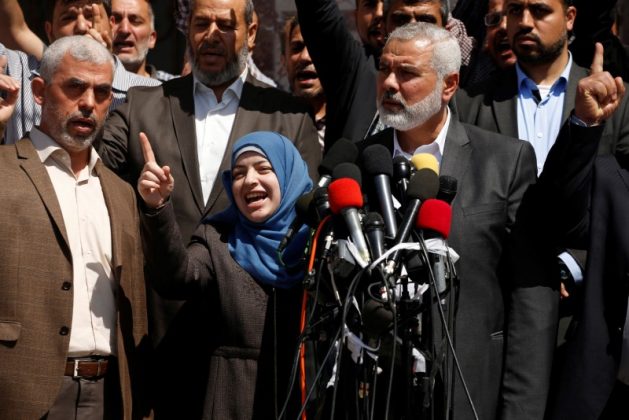 GAZA (Reuters) – Hamas and Iran have patched up relations, the Palestinian militant group’s new leader in Gaza said on Monday, and Tehran is again its biggest backer after years of tension over the civil war in Syria.

“Relations with Iran are excellent and Iran is the largest supporter of the Izz el-Deen al-Qassam Brigades with money and arms,” Yehya al-Sinwar, referring to Hamas’s armed wing, told reporters.

Neither Hamas nor Iran have disclosed the full scale of Tehran’s backing. But regional diplomats have said Iran’s financial aid for the Islamist movement was dramatically reduced in recent years and directed to the Qassam Brigades rather than to Hamas’s political institutions.

“The relationship today is developing and returning to what it was in the old days,” Sinwar, who was elected in February, said in his first briefing session with reporters.

“This will be reflected in the resistance (against Israel) and in (Hamas’s) agenda to achieve the liberation,” he said.

Hamas seeks Israel’s destruction. It has fought three wars with Israel since seizing the Gaza Strip from forces loyal to Western-backed Palestinian President Mahmoud Abbas in 2007.

Sinwar, a former Hamas security chief who had spent 20 years in Israeli jails, said the group is always preparing for a possible war with Israel. But he said such a conflict was not in Hamas’s strategic interests at the moment.

“We are not interested in a war, we do not want war and we want to push it backward as much as we could so that our people will relax and take their breath and in the same time we are building our power,” he said. “We do not fear war and we are fully ready for it.”

Hamas and Abbas’s Palestinian Authority (PA), which exercises limited self-rule in the Israeli-occupied West Bank, are locked in political dispute over the issue of Palestinian unity.

Abbas’s slashing of PA funding for Israeli-supplied electricity to Gaza has led to prolonged daily blackouts in the coastal enclave.

Sinwar, in his remarks, invited Abbas’s Fatah movement for talks on forming a new national unity government to administer both the Gaza Strip and the West Bank.

There was no immediate response from PA officials. Abbas has called on Hamas to first relinqish control of Gaza before he removes economic sanctions and to prepare for the formation of a new unity government that will be tasked with holding presidential and parliament elections.