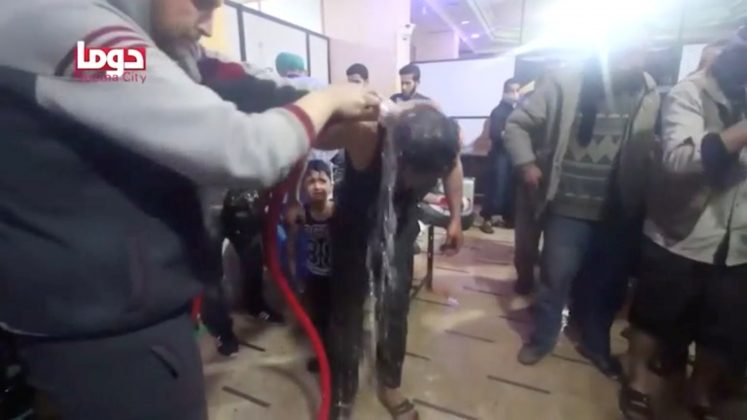 A man is washed following alleged chemical weapons attack, in what is said to be Douma, Syria in this still image from video obtained by Reuters on April 8, 2018. White Helmets/Reuters TV via REUTERS

AMMAN (Reuters) – The Russian and Syrian military on Monday said Israeli war planes carried out missile strikes on a Syrian air base, hours after U.S. President Donald Trump warned of a “big price to pay” following reports of a poison gas attack on a rebel-held town.

Syrian state TV initially said the United States was suspected of carrying out a missile attack on the T-4 airfield near Homs, after harsh words by Trump over the reported chemical attack on Saturday in the town of Douma which killed dozens of people.

The United States denied attacking the Syrian base, and France also said its forces had not carried it out.

The Russian military, whose forces are supporting Syrian President Bashar al-Assad, said two Israeli F-15 war planes had carried out the strikes on the Syrian T-4 air base, the Interfax news agency reported.

Interfax cited the Russian Defence Ministry as saying the Israeli war planes had carried out the strikes from Lebanese air space, and that Syrian air defense systems had shot down five of eight missiles fired.

Syrian state media, citing a military source, then carried a similar report. “The Israeli aggression on the T4 airport was carried out with F-15 planes that fired several missiles from above Lebanese land,” state news agency SANA said.

When asked earlier about the explosions from the air base, an Israeli spokeswoman declined to comment. Israel had no immediate comment to the Syrian and Russian military charges.

Israel has struck Syrian army locations many times in the course of the conflict, hitting convoys and bases of Iranian-backed militias that fight alongside Assad’s forces.

Israel has accused Damascus of allowing Iran to set up a complex at the T-4 base to supply arms to its ally, Lebanon’s Shi’ite Hezbollah.

Syrian state TV, in its initial report, said there had been casualties in what it said was a suspected U.S. missile attack on the T-4 airfield near Homs, close to the ancient city of Palmyra in central Syria. The Pentagon denied U.S. war planes were carrying out any air strikes in Syria at the present time.

“However, we continue to closely watch the situation and support the ongoing diplomatic efforts to hold those who use chemical weapons, in Syria and otherwise, accountable,” it said.

Defence analysts say there are large deployments of Russian forces at the T-4 base and jets fly regular sorties from there to strike rebel-held areas.

The Syrian state broadcaster said there were several dead and wounded in the strike.

The Syrian Observatory for Human Rights, a British-based monitor, said at least 14 people were killed including some fighters of various nationalities, a reference to Iranian-backed Shi’ite militia members, mostly from Iraq, Lebanon and Iran fighting alongside the Syrian army.

Reuters could not independently verify the report.

The Syrian opposition blamed the suspected chemical attack on Saturday in Douma on government forces.

As international officials worked to try to confirm the chemical attack, Trump took the rare step of directly criticizing Russian President Vladimir Putin in connection with the incident.

Trump said on Twitter on Sunday there would be a “big price to pay” after medical aid groups reported dozens of civilians, including many children and women, were killed by poison gas in the besieged rebel-held town.

“Many dead, including women and children, in mindless CHEMICAL attack in Syria. Area of atrocity is in lockdown and encircled by Syrian Army, making it completely inaccessible to outside world. President Putin, Russia and Iran are responsible for backing Animal Assad. Big price to pay,” Trump wrote.

The Syrian government denied its forces had launched any chemical assault, while Russia, Assad’s most powerful ally, called the reports fake and warned against military action on the basis of “invented and fabricated excuses”.

The Syrian government launched an air and ground assault on Douma, the last rebel-held town in the eastern Ghouta district, on Friday.

French President Emmanuel Macron spoke to Trump by telephone and the two agreed they would work together to establish clear responsibility for what Macron’s office said they had agreed was a confirmed chemical attack.

Macron said in February “France will strike” in the event of lethal chemical weapon attack on civilians by government forces in Syria. A French defense ministry official said on Monday France did not carry out the air strike on the T-4 base.

The medical relief organization Syrian American Medical Society (SAMS) and the civil defense service, which operates in rebel-held areas, said in a joint statement 49 people had been killed in the suspected gas attack.

One video shared by activists showed bodies of about a dozen children, women and men, some with foam at the mouth. “Douma city, April 7 … there is a strong smell here,” a voice can be heard saying.

The United States launched a cruise missile strike on a Syrian air base a year ago in response to the killing of dozens of civilians in a sarin gas attack in an opposition-held town in northwest Syria. The gas attack was blamed on Assad.

U.S. government sources said Washington’s assessment of the Saturday attack was that chemical weapons were used. The European Union also said evidence pointed to the use of chemical weapons by Assad’s forces.

A European diplomat said Western allies would work on building a dossier based on photos, videos, witness testimony and satellite images of Syrian flights and helicopters. However gaining access to samples on the ground would be difficult.

The U.N. Security Council will meet twice on Monday following rival requests by Russia and the United States.

U.N. war crimes investigators had previously documented 33 chemical attacks in Syria, attributing 27 to the Assad government, which has repeatedly denied using the weapons.