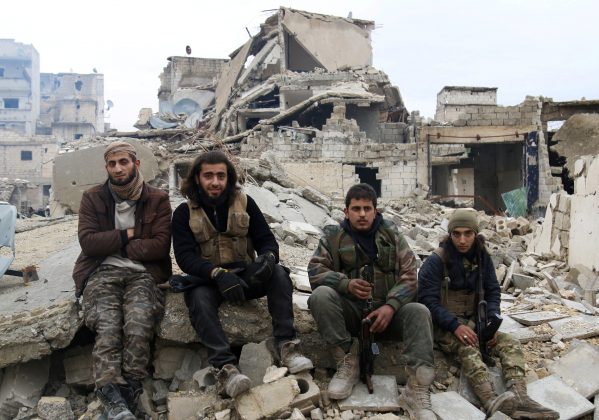 FILE PHOTO: Rebel fighters sit on the rubble of damaged buildings as they wait to be evacuated from a rebel-held sector of eastern Aleppo, Syria December 16, 2016. REUTERS/Abdalrhman Ismail/File Photo

By Tom Perry and Suleiman Al-Khalidi

BEIRUT/AMMAN (Reuters) – Syrian President Bashar al-Assad’s opponents appear more divided than ever as they prepare for peace talks next week, demoralized by their defeat in Aleppo and unable to unite into a single force to defend their remaining territory.

The new diplomacy led by Assad’s Russian allies has exposed yet more splits in a rebellion that has never had a clear chief, with rebel factions long fractured by regional rivalries, their ties to foreign states, and an ideological battle over whether to pursue Syrian national or Sunni jihadist goals.

Several leaders have became prominent only to be killed in the nearly six-year-old conflict and numerous military and political coalitions have come and gone. After the rebels’ defeat in Aleppo last month, the latest effort to unify the jihadist and moderate wings of the insurgency collapsed.

By contrast Assad is as strong as at any time since the fighting began, his Russian and Iranian backers committed to his survival while the differing agendas of foreign states backing the rebels have added to their divisions.

The delegation of rebels that will attend the talks with the Syrian government starting on Monday in the Kazakh capital Astana represents only part of the moderate opposition that has fought Assad in a loose alliance known as the Free Syrian Army.

Most are from groups fighting in northern Syria with the backing of Turkey. Other rebel groups seen closer to the United States and Saudi Arabia have been left out.

The delegation will be led by Mohammad Alloush, the politburo chief of the Jaish al-Islam rebel group, which is at the more moderate end of the Sunni Islamist spectrum and has its main stronghold near Damascus.

Alloush, who lives outside Syria, has not been appointed to the role because he wields influence over the rebellion as a whole — he does not. He was chosen because he is a member of the High Negotiations Committee (HNC), an alliance set up with Saudi and Western support in 2015.

The HNC itself, the broadest opposition body formed since the war began, has not been invited to Astana.

Its chairman, former prime minister Riad Hijab, is the nearest thing the moderate opposition has to “a face”. But his role is closer to that of a spokesman for the myriad groups on the ground and he will not be in Astana either.

The HNC has said it hopes the Astana talks will be a step towards new peace talks in Geneva. But while Russia says Astana aims to supplement Geneva, some in the opposition fear Moscow is trying to supplant the U.N.-backed process with its own and wants to increase divisions in the rebel camp.

“Going to Astana has more danger than going to Geneva,” said

Mohammad Aboud, a member of the HNC.

“In Geneva, there was a political front for the opposition

that had gained international recognition while in Astana there

an occupying force and not a mediator.”

He said “polarisation may increase” in the opposition and

added: “This is perhaps one of the real goals of the Russians –

to increase the division.”

Russia’s peace moves have also exacerbated the split between the moderate and jihadist wings of the insurgency, fuelling tensions that have spilled into confrontation in Idlib, the rebels’ main remaining foothold.

A ceasefire brokered by Russia and Turkey last month has excluded the main jihadist group in northwestern Syria, Jabhat Fateh al-Sham, while a spate of air strikes targeting its leaders have increased mistrust in the rebel camp.

All this plays further to Assad’s advantage, as his Russian and Iranian allies want to lead diplomacy over Syria, with Donald Trump indicating he will cut backing for the moderate Syrian opposition as U.S. president.

The rebels going to Astana say the meeting must focus on shoring up the ceasefire and will resist political discussions although Assad has said he is open to such talks.

“If Astana is just about a mechanism for a ceasefire, and humanitarian access, then it is positive. But it won’t be good if they discuss political affairs in Astana because that will amount to the marginalization of the other political forces,” said one FSA commander.

After years of failed international diplomacy, Moscow says it wants to advance peace by dealing directly with rebels fighting on the ground. It says the aim of the talks, which Iran will also attend, is to consolidate the ceasefire.

Turkey, which backs the revolt against Assad, is also behind the new peace drive and is widely believed to have put pressure in the rebels to go to Astana.

This reflects its shifting goals in Syria, where its priorities are now shaped around combating Kurdish militia and Islamic State near its border.

The outlook for the moderate rebels is more uncertain than ever as Trump has signaled he will cut American support for rebels who have been armed under an aid program backed by the United States, Arab states and Turkey.

An invitation to Astana has been sent to the United States, but Saudi Arabia and Qatar have been left out.

The rebel divisions have long worked in Assad’s favor in the conflict, which grew out of protests against Assad and his government in March 2011 and is estimated to have killed several hundred thousand people.

Assad’s foreign allies have had a critical role in helping to shore up his control over a rump state in western Syria, even as large swathes of territory in the east and north remain in the hands of Kurdish militia and Islamic State.

Many of the rebels fighting Assad in western Syria have themselves fought Islamic State, and at times the Kurds. While they are in retreat, they still hold significant territory including nearly all of Idlib province in the northwest.

Jihadist groups such as Jabhat Fateh al-Sham, formerly known as the al Qaeda-linked Nusra Front, were left out of the latest ceasefire. Adding to the tensions among the rebels, Fateh al-Sham’s leaders have been targeted in a spate of recent U.S. air strikes, fuelling accusations of treachery among rebel groups.

Fateh al-Sham launched an attack on another powerful Islamist group, Ahrar al-Sham, in Idlib province on Thursday. Until recently both sides were at the heart of the merger talks.

Sheikh Abdullah al-Mohaisany, a Saudi Islamist cleric who has played a prominent role in Syria mobilizing support for the insurgency, called the failure of the merger talks a “saddening, regrettable” moment that left Idlib vulnerable to attack.

“If the attack on Idlib starts … the people will say ‘come on, let’s merge’,” he said in comments to an Islamist media outlet on YouTube after the rebels were dislodged from Aleppo, Syria’s biggest city and economic hub before the conflict.