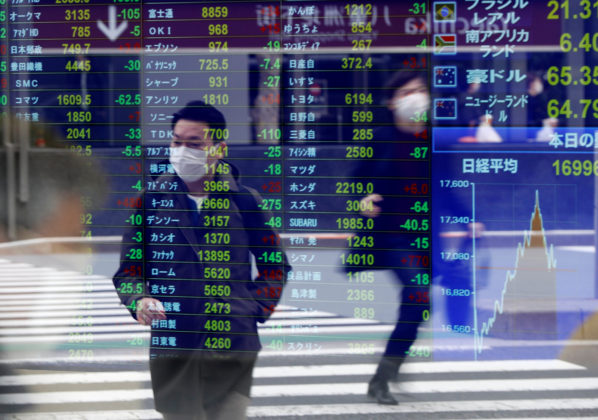 (Reuters) – U.S. President Donald Trump has put his faith in anti-malarial drug hydroxychloroquine to ward off COVID-19, but governments and investors are focusing on a vaccine. Without one, it’s unlikely economic activity can resume fully.

So the race is on, and the rewards are rich: AstraZeneca has vaulted into the position of the most valuable British company after receiving a U.S. pledge for up to $1.2 billion for its experimental vaccine.

The United States has vaccine development deals with Johnson & Johnson and Sanofi, too. But many others, big and small, are in the race: Imperial College, Gilead Sciences, Roche, China’s CanSino Biologics and India’s Glenmark to name just a few.

European clashes over how to handle the economic impact of the COVID-19 crisis raised fears for the bloc’s future, but a Franco-German proposal aimed at helping the worst-hit states represents a pivotal moment. The markets want to see the details, however. All eyes will be on the European Commission, which on Wednesday presents its pandemic recovery plan.

The task is to ensure weaker states such as Italy can access funding without adding to their debt burden. But EU states remain divided over whether recovery funds should be funneled through loans or transfers. If those opposed to big-spending manage to water down the plan, the euro and southern European bonds will take a knock.

The change in Germany’s previously hardline stance was momentous. Now it’s the turn of others such as Austria and the Netherlands to decide whether they are ready to cross the Rubicon.

Beijing’s control has long been a sore point for some Hong Kongers. Its latest proposal for a tougher national security regime for the city will almost certainly lead to further violent confrontations on the streets and open a new venue for Sino-U.S. tension.

Only this time it may be worse, which is why the Hang Seng index was hit harder on Friday than even the worst days in the March selldown. China has replaced the leadership in its Hong Kong Liaison office and, foreign envoys reckon, quietly doubled the number of staff there.

The United States has already warned of a tough response. Investors will look there, and to the situation on the ground for cues. As for markets, Hong Kong’s property index posted its worst drop in 11.5 years on Friday. European luxury shares and banks such as HSBC also took a hammering on Friday, meaning ripples could spread.

Coronavirus is a double-edged sword for cloud-computing firms. It has supercharged demand for data center services to support video-streaming and other remote services but is also forcing corporates to slash budgets amid a deep recession.

Cloud computing players take the spotlight on Wall Street in the coming days as they report quarterly results and guide investors on the outlook. Autodesk and Workday report on Wednesday. Salesforce.com  – viewed as the gold standard – follows on Thursday, along with systems software seller VMWare.

The First Trust Cloud Computing index ETF  has gained over 10% in 2020, although some big-name cloud-computing stocks have yet to fully recover from their March lows.

Armed with less fiscal firepower and weaker healthcare systems than richer peers, emerging economies have been less able to counter coronavirus-induced drops in consumption, foreign investment and exports, or alleviate the effects of job losses.

That strain shows up in economic data, not least the 6.8% Q1 contraction in China’s economy, the biggest in decades. Soon four other emerging market heavyweights – Turkey, Mexico, Brazil and India – will tell us how their growth fared in the January-April quarter.

Expect gloomy readings. India, not long ago, the fastest-growing big economy, is expected to have expanded 2% in Q1; Turkey’s economy is seen contracting this year for the first time in over a decade. For Brazil and Mexico Goldman Sachs predicts full-year contractions of 7.4% and 8.5% respectively.