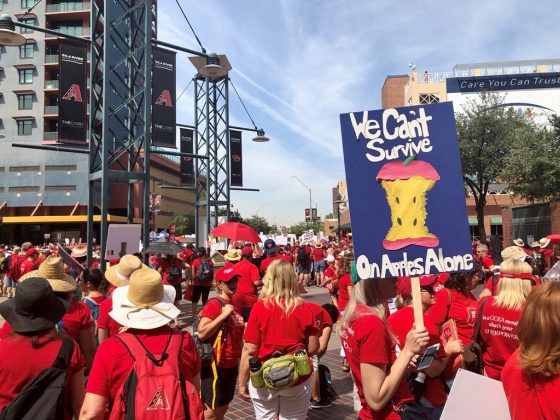 (Reuters) – It has been called the “Teachers’ Spring” in the United States, with educators from five states staging an unprecedented wave of protests demanding increases in pay and school budgets.

Encouraged by progressive resistance to President Donald Trump and the #MeToo movement, the protests by the nation’s teachers, more than three-quarters of whom are women, mark the first statewide walkouts since the 1990s.

Some educators have likened their movement to the “Arab Spring”, a series of anti-government uprisings that hit Arab countries in North Africa and the Middle East beginning in 2010.

The movement has already prompted lawmakers to allocate pay increases for teachers and more money for schools in West Virginia, Oklahoma and Colorado, while Arizona’s legislature is also trying to hammer out a deal.

The strikes started in West Virginia in February and then spread to Kentucky, Oklahoma and Arizona, all of them Republican-controlled states that put limits on education spending during the 2007-2009 recession and never fully removed them. Teachers in Colorado, which has a Democratic governor, walked out last week.

According to the National Education Association, a group representing public school teachers nationwide, the average teacher salary in the United States decreased by four percent from 2008‒09 to 2017‒18, after inflation adjustment.

The West Virginia strike, which shut schools for almost two weeks, ended with a five percent pay raise. Teachers in Oklahoma returned to classrooms after the legislature passed its first major tax increases in a quarter century, raising about $450 million in revenue for education.

Arizona teachers have sought a 20 percent pay rise. Arizona Governor Doug Ducey on Friday announced a deal with state legislative leaders to raise teachers’ pay 20 percent by 2020, but it was unclear how the money would be raised.

These conservative groups say school districts need to cut back on non-teaching staff rather than seek bigger budgets.

WHICH STATES COULD BE NEXT TO SEE A WALKOUT?

The protests have been largely driven by social media, rather than union leadership, allowing activists to organize rapidly. Arizona’s movement began with a Facebook page that encouraged teachers to show up for work wearing red – the color of the movement.

They have moved West through states where teacher pay is among the lowest in the country, per-pupil funding has fallen in real terms since the recession and where state legislatures largely control teacher salaries. Other states with a similar profile include Mississippi, Alabama, North Carolina, New Mexico, Utah and South Dakota, according to a study by Brookings Institution analyst Michael Hansen.

A teachers’ group in North Carolina has called for a march on the state capitol on May 16. At the same time, legislatures for states such as South Dakota and Alabama have recently voted to increase teacher pay, possibly heading off protests.

Walkouts crossed a political divide when they spread to Colorado, where Democrats control the governorship and lower house and Republicans hold the senate. Other states with mixed political control and relatively low teacher pay include New Mexico and Nevada.