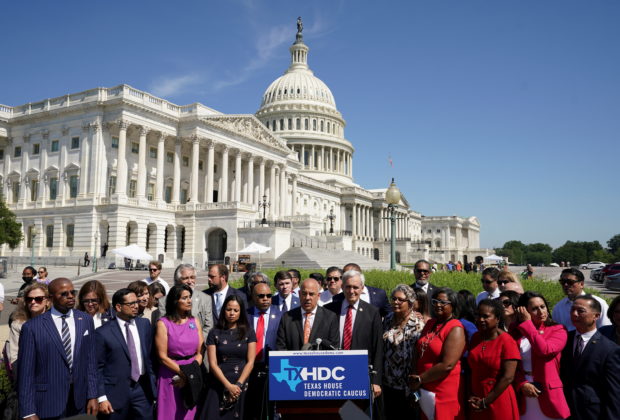 FILE PHOTO: Representative Chris Turner joins other Democratic members of the Texas House of Representatives, who are boycotting a special session of the legislature in an effort to block Republican-backed voting restrictions, as they speak in front of the U.S. Capitol in Washington, U.S., July 13, 2021. REUTERS/Kevin Lamarque/File Photo

(Reuters) – The Texas State Legislature has resumed its session following the return of some Democratic lawmakers who had avoided Austin for weeks to deny Republicans the quorum needed to pass voting restrictions.

The legislative body just reached quorum with 99 members present and 49 absent on Thursday, with many members of the Democratic caucus still refusing to return, according to a tally by the Texas Tribune.

“It’s time to get back to the business of the people of Texas. I appreciate every one of you. I’m looking forward to working with you,” House Speaker Dade Phelan, a Republican, told the lawmakers.

The resumption of business in the Texas legislature clears the way for the passage of the voting restrictions bill that the Democratic caucus opposes.

Texas House Democratic Caucus Chair Chris Turner released a statement on Thursday doubling down on the caucus’ opposition to the voting restriction bill. He praised his members’ efforts to block the bill by leaving the capitol for Washington, D.C. and other locations around the country for 38 days.

“We will fight with everything we have in this special session to protect Texas voters and push for real solutions to the actual issues families in our state face every day,” he said.

Three Democratic state representatives released a statement on Thursday explaining that they would return for the legislators’ special session and calling for a bipartisan effort to address the state’s COVID-19 crisis.

“We are proud of the heroic work and commitment we and our fellow Democratic caucus members have shown in breaking quorum in May and again over the summer,” wrote Representatives Garmet Coleman, Ana Hernandez and Armando Walle.

“We took the fight for voting rights to Washington, D.C. and brought national attention to the partisan push in our state to weaken ballot access… Now we continue the fight on the House Floor.”

The representatives’ decision to break with their caucus and return to Austin was met with criticism from some of their colleagues who are still holding out.

“This is how Texas Democrats lose elections,” Representative Michelle Beckley tweeted in response to the three lawmakers’ statement.

“I’m extremely disappointed that they went back to make quorum. It was not what was… communicated with our House Democratic caucus,” Representative Ryan Reynolds, who was still in Washington, told local television station KXAN.